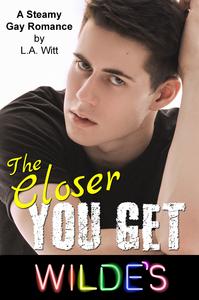 TITLE: The Closer You Get

The virgin isn’t the only one with something to lose...

Self-described manwhore Kieran Frost is loving the single life. Two years after moving to Seattle, he still has his friends with benefits, Rhett and Ethan, plus a never-ending supply of gorgeous, available men wandering through the bar where he works. A relationship? Spare him the drama and heartbreak. He’s got no complaints about his unattached lifestyle.

When Rhett’s daughter introduces him to newly-out-of-the-closet Alex Corbin, Kieran’s interest perks up. After all, the quiet ones are always the freaks in bed. But Alex isn’t just shy and reserved. He’s a virgin in every sense of the word, having never even kissed anyone else.

Kieran is no one’s teacher, and his first instinct is to run like hell in the other direction. But his conscience won’t let him throw the naïve kid to the wolves for someone else to take advantage of. The plan is to introduce Alex to his own sexuality, pull him out of his shell, then go their separate ways.

It’s the perfect, foolproof plan…assuming no one falls in love.

“I still think it’s a travesty that Alex is gay.” Beth’s voice drew me out of my thoughts and into the conversation going on in the car. From the passenger seat, she glanced back at me. “No offense.”

Lisa, Sabrina’s other friend, said, “I’m telling you, if that man was straight, I would date him in a heartbeat.”

“I second that,” Beth said. “I swear to Christ, every hot man at school is either gay, taken, or a complete asshole.”

“Some are probably all three,” I said.

I chuckled. “What do you care? Your dads won’t let you date until you’re thirty anyway, remember?”

Well, that was a plus. Good-looking. College. No one had ever seen him date. Probably meant any guy he’d “dated” was gone by sunrise. My kind of man.

“Don’t you have a picture of him on your phone?” Lisa asked.

“Oh, you’re right.” Sabrina reached into her purse. “I’d forgotten all about that.” She pulled out her phone and scrolled through a few pictures. “Ah, here it is.”

I took the phone from her.

Oh, hello. Maybe I could be persuaded to stick around for a while tonight after all. The lighting and resolution didn’t let me get a very good look at his eyes, but what I could see of him was certainly attractive. Clean cut, clean shaven, with dark hair that was just long enough to run fingers through. Or get a good grip on.

I cleared my throat and handed the phone back. “Nice-looking guy.”

“God, yes.” She put her phone back into her purse. “Just wait ’til you see him in person.”

I shook my head. “Oh, my dear, you only say that because you’ve never spent any time dating gay men. I assure you, there are plenty of unattractive men batting for my team.”

“Not many,” Lisa said. “You guys get way more hotties than we do. It isn’t fair.”

“Yeah,” Beth said. “Even Sabrina’s dad and stepdad are hot.”

Sabrina wrinkled her nose. “Oh, eww, don’t talk about my dads that way.”

I laughed to mask my sudden panic at Rhett and Ethan being brought into the conversation, as if someone might catch on to what we had going on. Sabrina didn’t need that. Neither did I.

I quickly changed the subject back to Alex. “So, how did you meet this guy, anyway? He in some of your classes or something?”

Sabrina nodded. “He just transferred in at the beginning of the year from another state.”

Mercifully, the conversation stayed safely in the realms of Alex and school for the rest of the drive. Rhett and Ethan weren’t mentioned again, thank God.

“Here we are.” Beth turned on her signal and slowed down.

I barely kept myself from groaning when she pulled into the parking lot of one of those places that was like a pub-sports bar hybrid. The type of place that probably had a house country band some nights, football other nights, and a jukebox that still played vinyl. My favorite kind of place.

On our way in, we passed a row of neon beer signs and walked in through a tinted glass door that had tarnished sleigh bells banging against the window. Seattle had banned indoor smoking years ago, but places like this still always managed to have a hazy atmosphere, like the air had never quite cleared after decades of cigarettes.

The bar was lined with customers whose belt buckles were probably at least six inches across. Some quietly drank, others made animated gestures with their beers as they yelled at an umpire on one of the grainy TVs above the bar. Frying grease crackled faintly in the background, and the thick smell of all things fried and salty hung as heavily in the air as the haze.

Through that haze, I made eye contact with one of the bartenders, and his eyes widened with both recognition and horror as the color slipped out of his cheeks. It only took a second or two for me to place him: he was a frequent patron at the gay bar where I worked. We’d flirted a few times, and I was pretty sure he and one of the bouncers had been sleeping together for the last few months.

If his expression was any indication, I was the only one in this establishment who knew about any of that, and he desperately wanted to keep it that way.

I pretended not to notice or recognize him, and followed the girls to the back of the room. Their friends—maybe a dozen or so guys and girls—greeted Sabrina with hugs and birthday wishes. They’d commandeered a few booths by the pool tables, and the beer was already flowing.

For a twenty-first birthday, though, they kept it pretty mellow. There were bottles, glasses, and pitchers of beer on tables, the odd mixed drink here and there, but the booze wasn’t the center of attention. The group had obviously been here awhile, having settled into a couple of lively games of eight-ball, but no one was visibly drunk.

I could see why Ethan and Rhett weren’t all that worried about Sabrina tonight. Her friends weren’t a wild bunch, from what I could see. Besides, she was a smart kid, had her head screwed on straight—clearly nature over nurture, I often teased her dads—and she was the one who’d chosen this place for her birthday instead of one of the racier clubs downtown. A few beers in a place with neon Budweiser signs and pool tables instead of a potentially dangerous binge under flickering disco lights. She actually stood a chance of remembering her twenty-first birthday party.

“Where’s Alex?” Sabrina asked the group. “Tell me he didn’t bail on me.”

Someone gestured with a pool cue. “He’s playing cricket with Shane and Cory.”

“Oh, good.” She put her hand on my elbow. “Thank God, he actually showed up.”

“Were you concerned he wouldn’t?”

Her cheeks reddened. “A little.”

I shot her a glare but then followed her.

“He’s just really, really shy,” she said as we crossed the mostly empty club. “Took me forever to even get his name out of him. He’s—oh, there he is.” She pointed at the dartboards, where one guy was getting ready to throw while two others watched.

I furrowed my brow, looking at each of the guys in turn. Two of their backs were to me, which kept me from matching anyone up with the face I’d seen on Sabrina’s phone.

My gaze shifted to the one she’d indicated, and I suddenly had a feeling this evening would be worth the sacrifice of leaving Rhett and Ethan with a bed and a bottle of Patrón.

The gray T-shirt Sabrina had used to identify him rested over a set of broad shoulders, and his tight-but-not-too-tight jeans clung to deliciously narrow hips. From here, I guessed he was an inch or two taller than me, which was also a bonus. I wasn’t a fan of having to crane my neck up or down to kiss someone. Nothing threw cold water on a kiss or a hot fuck like a damned neck cramp.

Of course, Sabrina had only brought me here to coax him into Seattle’s gay lifestyle, but there wasn’t a man alive I didn’t automatically size up in terms of whether or not I’d sleep with him. Even when I wasn’t dying to get laid. Some people said that made me a slut. Hey, if the shoe fits…

Sabrina nudged me toward him. “Come on, I’ll introduce you.”