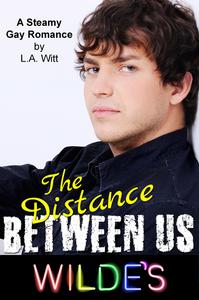 “So how long does it take for the novelty of seeing the Space Needle every day to wear off?”

I laughed. “You’re not a Seattle native, are you?”

Kieran shook his head. “Just moved up here from Sacramento.”

“Trust me, you won’t even notice the damned thing after a week or two.”

“I take it you’re a native?” he asked as we walked back into the house.

“Moved here a few years ago. From Portland.”

“So you’re a Northwesterner. Washington, Oregon, it’s all the same.”

I looked over my shoulder and raised an eyebrow. “And Sacramento and LA are the same too, right?”

“Hey, those are fightin’ words.” He laughed. We stepped into the kitchen, and he whistled. “I think this kitchen is bigger than my last apartment.”

I folded my arms and leaned against the counter. “Was one of the major selling points of the house.”

“I can imagine. How long have you had it, anyway?”

“Just over a year.” Some bitterness crept into my tone, but I tried to push it back. I looked around the kitchen and living room. “I hate to sell it, but—”

“You’re selling it?” He ran his fingers along the beveled edge of the black granite countertop. “Man, they’d have to pry a place like this out of my cold dead hands.”

“Well, it’s not going up right away. Depending on what the market does, probably in a year or two.” Inwardly, I cringed, digging my tongue stud into the roof of my mouth and trying not to groan. Another year or two of living with Ethan. No matter how many times we’d discussed this, no matter how much I convinced myself there was little choice, the very thought of sharing a house for even another month was enough to nauseate me.

I shifted my weight. “Anyway, we won’t be selling any time soon, so don’t worry about us throwing you out.” Though if you lick your lips like that again, you might have to worry about me throwing you down on—

“That would be Ethan,” I said through my teeth. Kieran shot me a puzzled glance, but, before he could say anything, Ethan appeared in the doorway to the kitchen.

I watched Kieran’s face as he drank in the sight of Ethan, and I couldn’t blame him for the catch of his breath. There were plenty of things I could have said about Ethan, but I definitely couldn’t say he was bad looking. Those devilish brown eyes were what had attracted me to him in the first place and, even after everything we’d been through, they still made my pulse jump. Though he was forty-one, his dark hair had just a hint of silver at his temples. The time he spent in the gym was evident in the powerful build of his shoulders and the perfectly flat stomach. I hadn’t seen him without a shirt on in a long, long time, but he’d had a six-pack for years, and most likely still did. Even with the button-down shirt and blazer he wore now, he was obviously fit.

Pity I could barely stand the sight of him, because he certainly wasn’t hard on the eyes.

“You must be Kieran.” He extended a hand. “Ethan Mallory. I hope he hasn’t told you too much about me.” His eyes darted toward me and one side of his mouth lifted in his trademark smirk. That look used to make my knees weak. Now it irritated me. Or maybe that was just Ethan’s presence. Either way, he was here and I wished he wasn’t.

Kieran shook Ethan’s hand. “He’s just finished showing me around the house. I still can’t believe you guys are going to sell this place.”

Ethan dropped his gaze and shrugged. “Well, you know how things happen. Sometimes it’s just time to move on.”

Kieran’s eyes shifted back and forth between us, something like alarm in his expression.

I quickly changed the subject. “So, you’re working at Wilde’s?”

He nodded. “They just hired me on as a bartender.”

Ethan’s smirk returned. “Hey, that means we can brag to our friends that we’ve got a Wilde’s bartender living with us.”

Kieran laughed. “I could think of more prestigious bragging rights.”

“Hardly.” I chuckled. “Wilde’s is the Coyote Ugly of gay bars in Seattle. If you can get a job behind that bar—”

“Let’s just say it’s not quite the same as working at one of the other local dives,” Ethan cut in. “They only hire the best.” I wondered if Kieran caught the quick down-up sweep of Ethan’s eyes. The look was anything but subtle, but if Kieran noticed, he didn’t react. Jesus, Ethan, let the guy sign the lease before you start hitting on him, would you?

I picked up the paperwork off the counter. “Everything’s here. Just need first and last month’s rent, and have you sign or initial everywhere that’s highlighted.” I handed him the papers and a pen.

Ethan and I left the kitchen so Kieran could take care of paperwork without us looking over his shoulder. As we stepped out onto the balcony, the cool air from inside followed us. It was warm outside, even for late spring, but the space between us was cold. We both looked out at the city. I’d long since stopped noticing the Space Needle, but it suddenly fascinated me, if only as something to look at that wasn’t Ethan.

“I’m checking into some new jobs,” he said suddenly. After a moment, he added, “Back in Toronto.”

I lost interest in the Space Needle and turned to him. “Toronto? But what about this? With the house?”

He shrugged. “I’ll keep paying my share of it. I assume you won’t object to me being out of the house as long as the money’s still coming in.”

Oh, you aren’t wrong there. “It’s your call. If you do move, we should put it on the market sooner than later.”

“If that was a realistic option, it would be on the market right now,” he muttered. “And we wouldn’t be in this situation.” He paused. “Look, it’ll cost me more money in the long run, but I’d like to be a bit closer to my family. I don’t exactly have a reason to stay here.” The bitterness in his voice set my teeth on edge.

“I guess it’s a good thing I wasn’t planning to move back to Portland any time soon,” I growled.

He rolled his eyes. “If you were, you haven’t said a word about it to me. I’m not planning my life around yours anymore.”

“No, we’re both planning our lives around this fucking house. You just found a way out before I did.”

“Well, just let me know what happens then.”

“It’s not set in stone,” he said. “I’m sending my résumé to a few places, but I haven’t even gotten any calls. It’ll be at least a couple of months. But I wanted to let you know.”

“Much appreciated,” I said dryly.

He glanced over his shoulder and the smirk—along with my annoyance—came back. “I have to say, I think I’ll enjoy this view for the next few months, though.”

My annoyance turned into something else, tightening in my chest and throat as I tapped my tongue stud against my teeth. Was that—no, it couldn’t be. I’d only just met Kieran and I was eagerly awaiting the day Ethan moved out. Why the hell was I jealous?

The sliding glass door opened, and we both turned.

“I think this is everything.” Kieran handed me the paperwork. “Is a check okay for the deposit?”

“Check is fine.” I flipped through the pages to make sure everything was signed and initialed as it needed to be. “Yeah, looks like we’re all set.”

“So when’s he moving in?” Ethan asked.

“Lease technically starts on the first.” I looked at Kieran. “But when works best for you?”

“My nights off next week are Wednesday and Thursday,” he said. “It would be a day or two early, but—”

“Works for me,” Ethan said. His smirk turned into a grin. “The sooner the better.”

Kieran smiled at him. “Why don’t we make it Thursday, then?”

“Sounds good,” Ethan said. “I’ll take the day off and help you move in.” To me, he said, “I assume you’re okay with this?” From his tone, I didn’t imagine he cared about my opinion either way.

Day one, and you’ll already be alone in the house with him. Nice. I forced a smile. “Thursday sounds fine.” I reached out to shake Kieran’s hand again. “Welcome to our house.”

TITLE: The Distance Between Us

After ten years together, Ethan Mallory and Rhett Solomon are calling it quits and are ready to move on. Thanks to Seattle’s depressed real estate market, though, they’re stuck living as roommates with a hefty mortgage hanging over their heads. In an effort to speed things along, they decide to bring in some extra money by renting out the spare bedroom.

Wilde’s bartender Kieran Frost moves in, and suddenly, the only thing Ethan and Rhett both want more than getting away from each other is getting close to their single, young, hot roommate. Kieran doesn’t mind the attention from both, and he certainly doesn’t mind sharing.

Their combined chemistry ignites something else that Ethan and Rhett had thought was long dead—the mutual attraction that drew them together in the first place.

Except bitter jealousy over Kieran could push them even farther apart…