TITLE: Meet Me in the Middle 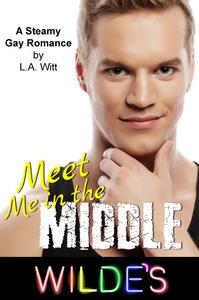 The Mallory-Solomon house was always loaded down with smoking-hot men. Seriously, on any given night, that place was a veritable cornucopia of gorgeous bodies and beautiful faces.

This evening was no exception. Rhett Solomon and his husband, Ethan, were both over the hill, but they sure didn’t look the part. Well, okay, Ethan was noticeably gray around the edges, and Rhett had a few lines on his otherwise oh-my-God gorgeous face, but time eventually did that to all of us. Besides, I was pretty sure that living with Ethan or Rhett would’ve had me aging beyond my years, so I’d say they were doing just fine.

Of course, Kieran Frost was there, sitting on a barstool beside the granite-topped kitchen island where Ethan and Rhett prepared munchies for the evening. In true Wilde’s bartender fashion, Kieran was walking eye candy, from his flawless body to his perfectly arranged, almost-black hair. He’d been the much younger plaything that Rhett and Ethan had both been fucking during that dark era a few years back when they’d split up. Apparently, men who fuck hot bartenders together, stay together. Who knew?

Kieran’s fiancé was also easy on the eyes. Alex had been naïve and shy when he first met Kieran—a virgin too, from what I’d heard—but Kieran had dragged him out of his shell and duly corrupted him. The kid had even started dressing a little less plainly, opting for some brighter—but still subdued by my standards—colors, things that fit a little tighter and showed a little more skin. The subtle highlights in his dark hair were a nice touch too.

And then there was, of course, yours truly. Like I said, smoking-hot men.

It was movie night in la casa de hot men, which was becoming something of a tradition. Bad movies, obscure movies, mainstream movies; we didn’t give a shit as long it was entertaining enough to keep us interested until the second or third bottle of wine kicked in. At that point, anything was interesting. Naturally.

Though odd numbers usually bred odd tension, especially when it was two couples and a single guy, that was never a problem with this group. They were affectionate with each other, but everyone flirted with everyone, so I never felt like a fifth wheel. I’d have stopped showing up a long time ago if I’d been the odd man out.

Sabrina Solomon and her boyfriend had been over to have dinner with her dads earlier in the evening, and shortly after Alex, Kieran and I arrived, the two of them were getting ready to go out.

“Well, look at you.” I gestured at Sabrina’s absolutely stunning black evening dress. “If I didn’t know any better, I’d say a couple of gay men helped you shop.”

Ethan muttered something and continued slicing cheese for the tray that was already half covered in artfully fanned-out crackers.

Sabrina just giggled. “Actually, it was just one gay guy this time.”

“What?” I put a hand to my chest and glared at Kieran. “You never take me shopping.”

“That’s because you find shit for me to buy, and I end up broke before we stop for dinner.”

I shrugged. “Not my fault I have good taste.”

Tyson, Sabrina’s boyfriend, put an arm around her waist. “Well, at least she’s got someone to take her shopping.” He smiled, but it was a nervous look, which was odd on someone who was usually so calm and mellow. He seemed in a hurry tonight. Almost twitchy as he said, “Anyway, we’d better run. Doors open at seven.”

“Have a good time.” Rhett came around the island and kissed Sabrina’s cheek. “You know the drill. Call me—”

“If we have too much to drink. I know, Dad.” She gave him a pointed look. “Since you’re hanging around with these miscreants tonight, are you sure you won’t have to call me for the same reason?”

“Don’t worry about it, Mr. Solomon.” Tyson shifted his weight from one foot to the other. “We’ll just be downtown. We can get a cab if we need to.” To Sabrina, he said, “Ready?”

“Yeah, let’s go.” She hugged both of her dads, said good-bye to the rest of us, and then they headed out of the kitchen with Tyson’s hand on the small of her back.

Rhett and Ethan looked toward the hallway until the door had closed. Then they glanced at each other.

“I don’t know.” Rhett shook his head. “I was sure he was going to do it last Friday night, and he didn’t.”

“What are you two talking about?” Kieran asked. “Is he going to propose or something?”

“You know he actually asked Rhett’s permission,” Ethan said to us. “I didn’t even think people did that anymore.”

“As if it’s my call.” Rhett gestured toward the door. “She’s the one he needs to ask, not me.”

I chuckled. “He was probably just making sure you didn’t sic Ethan on him or something.”

“He’s got a point, actually,” Rhett said with a shrug. “You are a good deterrent.”

“Oh, please. You know damn well you’re more intimidating than I am.” Rhett snatched a piece of cheese off the plate and just barely avoided a swat for his trouble.

Ethan released a huff of breath and turned to Kieran. “See what I put up with? Son of a bitch just uses me to chase off guys who want to date Sabrina.”

“Pretty sure that’s not the only thing he uses you for,” Kieran deadpanned.

Rhett laughed softly, but then he glanced in the direction Sabrina and her boyfriend had gone, and sighed. “God. It was bad enough when she started dating and when she graduated high school. Getting married?” He grimaced and shook his head. “That’s…a bit much.”

Ethan patted his shoulder. “Welcome to getting old, sweetheart.”

“Well,” I said, “at least you can find solace in always being younger than Ethan.”

Ethan glared at me. Rhett, Alex and Kieran all snickered.

Rhett wrapped his arms around Ethan’s waist from behind and kissed his cheek. “He’s got a point, you know. That’s why I keep you around.” Nuzzling Ethan’s neck, he added, “You make me feel young.”

Ethan elbowed him playfully, and they both laughed.

Kieran eyed him. “Which club?”

Flashing him a devilish grin, Alex said, “Why, the club of elderly gay men.”

“What?” Ethan arched an eyebrow. “How do you get to join? You’re not even thirty.”

Alex put an arm around Kieran’s shoulders and kissed his cheek. “He’s just having a bit of a not-quite-midlife crisis.”

I laughed. “What the hell? Did you find a gray nipple hair or something?”

“If I did, then it would’ve meant I was in bed with you.”

“Ooh,” the other guys said in unison.

I flipped Kieran the bird. “You only wish you were in bed with me, darling.”

“Keep telling yourself that, Dale.” Rhett clapped my shoulder. “So what’s the deal, Kieran?”

Alex smirked. “He got an invite to his ten-year high school reunion.”

“Ugh,” Kieran said. “I can’t believe it’s my ten-year reunion already. Where the hell did a decade go?”

Dale Ramsey is looking forward to his twenty-year high school reunion except for one small problem: will his old friend – and old flame – be there?

Adam O’Connor has disappeared twice from Dale’s life. Once after a graduation night fling, and again after a hot reunion years later. When he resurfaces this time, single and on the verge of retiring from the Navy, he wants to mend fences with Dale. Mend fences and maybe tear up some sheets.

The spark between them is alive and well, but Dale resists. After all, Adam has only been interested in him before when his life has been in flux, just like it is now, and Dale refuses to be anyone’s placeholder until something better comes along. He wants his friend back, but he’s not looking to be deserted a third time.

Over and over, though, their attempts to rekindle their friendship wind up igniting something much hotter, and Dale’s feelings for Adam are far too strong to ignore. Should he put himself on the line and risk another broken heart? Or should he be the one to walk away this time?