Holden Russell let his job consume his life for too long, and it took his wife leaving for him to realize it’s time for a change. His marriage is over, but he’s determined to do right by his kids, starting with fewer hours at work and more with them. Except it’s no longer the kids competing with his job for his attention. It’s Holden competing for their attention… with their new live-in nanny. Their very hot male live-in nanny.

Porter Blake never saw himself becoming a nanny, but okay. After burnout and PTSD drove him from his job as a paramedic, he’s desperate for something new, and it turns out the nanny gig isn’t so bad. The pay is decent, the stress is manageable, the kids are great, and their mom is cool. It’s the ex-husband he’s not so sure about.

The situation is awkward enough when Porter and Holden are butting heads. When they find some common ground and their mutual attraction becomes too much to ignore, things are bound to get complicated.

And unless they want Porter to lose his job, they’re going to have to fly under the ex-wife’s radar. Except secrets like this have a way of coming out… 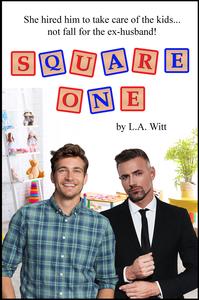