He’s a hockey star. And he’s my daughter’s hero. And now he’s…my boyfriend??

When Jase Kelly scores his fourth professional hat trick, it’s more than just a career highlight. In one of the hats raining down onto the ice, there’s a note from two fans—a girl whose migraines keep her from coming to games, and her dad, who hopes to get her an autograph for her birthday.

Devin McKenzie just hopes for a signature or maybe a chance for his daughter to meet her favorite player. Instead, Jase Kelly pulls out all the stops to give Dallas an evening of hockey, autographs, and all the souvenirs she can carry. She’s beyond starstruck. And Devin? Being starstruck wouldn’t make his heart race like this…would it?

Jase only wanted to cheer up a fan. He never expected to be so attracted to her dad. One look at Devin, though, and he’s speechless. And suddenly a lot more certain than he’s ever been about his sexuality.

Once they connect, they’re so good together it’s almost effortless… as long as Jase keeps Devin from seeing how the slightest bit of stress—or even nothing at all—can reduce him to shaking and hyperventilating. Meanwhile Devin desperately hopes that this one time, he’s found someone who won’t bolt from the reality of dating a parent of a child with chronic health issues.

They won’t be able to keep those cards hidden forever, though. Sooner or later, their respective truths will come to light.

Fate brought them together. Can love save them from falling apart?

Name From a Hat Trick is a 114,000-word standalone contemporary M/M romance. 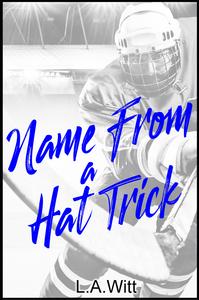 TITLE: Name From a Hat Trick