After a Marine roughs him up at a gay bar, Ensign Aiden Lange has some cuts and bruises on his face that are sure to raise questions at work. At the urging of a sympathetic cop, he spends the next day hiking to Okinawa’s Hiji Falls where he’ll claim he hurt himself in a fall.  But at the end of the trail, he’s in for a pleasant surprise—a gorgeous young guy in a pair of swimming trunks.

Connor didn’t come up to the falls to find a man, but when the ensign with the bandaged eyebrow finds him, he’s instantly intrigued. A hike turns into dinner, and before either of them know it, they’re inseparable. Connor’s experience with men is limited, but Aiden is gentle and—in spite of their mutual hunger for each other—infinitely patient.

It’s a small world, though, and an even smaller island, and when Connor’s father catches the two of them together, he’s more than just an overprotective dad—he’s one of Aiden’s high-ranking bosses. With a few phone calls, he can derail the Naval Academy grad’s carefully planned career trajectory. The ultimatum is simple—stay away from Connor, or kiss his dreams of advancement goodbye.

Aiden’s not so easily deterred, though, especially when it comes to someone like Connor, so the two continue seeing each other in secret. But there are only so many places to hide on a tiny island, and sooner or later, Aiden’s going to have to choose—Connor or his career. 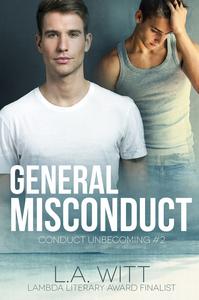 I stopped at the end of the trail, standing between a couple of rocks near the fence at the edge of the pool. He was maybe ten feet away now, close enough I could see droplets of water sliding down the grooves in his lean, smooth muscles. There was a little bit of dark hair plastered against his chest and his tanned arms, but not a lot.

And he was looking right back at me, eyes locked on mine.

“Hi.” I smiled, hoping he’d buy that it was the heat and the hike that had turned my cheeks as red as I was sure they were.

“Hi.” He returned the smile. “Another brave one bests the trail and the snakes and makes it to the top.”

“Not this time.” His lips quirked. “Were you watching the ground?”

“Where else would I look?”

He gestured above my head. “They hang out in the trees during the day.”

Slowly, I lifted my gaze. There weren’t any low-hanging branches right here, thank God, but I realized the trail had been shaded almost the entire way. And here I’d been worried about a drunk Marine jumping out at me. “Oh. Awesome. Glad someone mentioned that.”

Laughing, the guy in the water waded closer. “Just messing with you. They do hang in the trees, but I’ve been up here a million times and never seen one.”

“You ever seen one at all?”

“Sure.” He shrugged. “You do enough hiking, you’re going to sooner or later. But as long as they’re coiled up in the trees, you’re fine. They come at you in the grass, they’ll ruin your day.”

“So, watching the ground…is a good idea?”

“Always. But, you know, keep an eye on the trees.” He rested his hip against a boulder. “Nice hike, isn’t it?”

Truth be told, I don’t remember.

“It’s a nice trail.” I glanced back at the visible twist of rocks and stairs. “I’ve definitely hiked worse.”

“Recently?” He arched an eyebrow.

He gestured at his face, and I was suddenly hyperaware of the bandages and marks on my face. More heat rushed into my cheeks, and I dropped my gaze. “Oh. That.”

“You going to get in the water?” He motioned at the enticing pool.

“I, um…” I glanced at the No Swimming or Wading sign.

“Don’t worry about that.” He gestured dismissively. “Seriously, nobody cares.”

It wasn’t that I was worried about the sign and anyone who might happen along to enforce it. I’d already planned on getting in the water anyway. I just hadn’t banked on getting into the same water as someone who was making my legs shake worse than the hilly kilometer I’d just hiked.

Just get in the water, idiot.

I untied the laces and slipped off my boots. Then I emptied my pockets, leaving my car keys and wallet inside one of my boots. I started to pull off my shirt but hesitated. Though the trail was shaded, there was plenty of sunlight up here, and I’d forgotten to pack any sunscreen.

So I left my shirt on. I lifted one of the ropes, ducked under it, and stepped into the water.

And immediately pulled my foot back. “Shit.”

“Just a bit.” I tried again, dipping my toe in. Then my whole foot. A little at a time, I eased into the water, and by the time I was in up to my knees, I’d adapted to the cold. After the hike to get up here, it felt great.

After I’d waded a little deeper, I scooped some water into my hands, ignoring the way my raw knuckles burned, and leaned down to pour it over the back of my neck. As much as I wanted to splash it on my face, the doc had been pretty emphatic about keeping the stitches clean and dry. Given the microbes that could be lurking in river water…

Though I’d probably already invited those in via the cuts on my knuckles, but whatever.

I turned toward him. “Man, my legs are tired already. You wouldn’t think that hike would be that tough. It’s not even a mile.”

“Except it’s all up and down, up and down.” He made a gesture like a roller coaster. “We should all be glad it’s not even a mile.”

I laughed. “No kidding.” Legs still in the water, I sat on one of the rocks and looked up at the falls. “Wow, this really is amazing.”

I nodded. “I haven’t been on the island long.”

“Yep. Just transferred here recently. How long have you been here? On Okinawa, I mean. Not”—I gestured at the falls—“here.”

His hand was cool and damp from the water, but still hot from his body heat. As we shook hands, our eyes met, and they locked, and…fuck. Wow, he really was hot. Especially up close. Those blue eyes were unreal.

I released his hand, and as we both sat back, he gave me the oddest little smile, one that seemed caught somewhere between shy and cocky. Before I could figure out which, he broke eye contact and busied himself leaning over to scoop some water onto his arms. It was hard to tell, but I thought his cheeks might’ve turned pink.

“Every now and then.” Connor splashed some more water onto his arms and then leaned back against the rock. “It’s one of my favorite places on the island.”

“You can’t really go wrong on this rock. I’ve been to all the castles, the outlying islands, the good snorkel spots.” He shrugged. “Just depends on what you’re into, I guess.”

“I tried.” Connor tapped just below his temple. “It bugs my ears.”

“Tell me about it. There’s some awesome places to snorkel here. I’ll bet diving would be even better.”

“Really.” I mirrored his earlier motions, leaning down and scooping some water—holy fuck, that stung my knuckles—onto my arms to cool myself off. “Any good spots?”

“I haven’t found a bad spot here. Though I did stop snorkeling off Kadena Marina after I realized it’s right next to a sewage treatment plant.”

I wrinkled my nose. “Seriously?”

He nodded. “I don’t know if they actually dump anything in the water, and it all looks pretty clean and clear, but…no way I’m putting my face in that water.”

“Other than that, though, you can pretty much pull off the road anywhere, jump in the water, and see all kinds of cool shit. Just, you know, watch for jellyfish.”

“That’s what I’ve heard.” I sat back against the rock and, without thinking about it, propped my foot up on the other rock…just inches from his leg.

He glanced down, and that odd smile came back to life as he looked at me again. There was no casually pulling my leg back and pretending it had never happened, so I just kept it against the rock.

Clearing my throat, I broke eye contact. “You had any problems with jellyfish when you’ve snorkeled?”

“Not the box jellyfish. Never even seen one, knock on wood.”

I lifted my gaze. “Are there others?”

Connor nodded. “Buddy of mine got stung in the face by one of the red ones. Those fuckers won’t kill you, but, man, they will ruin your day.”

“Yep. Watch out for them. They’re red and about this big.” He held his hands up about a football’s width apart. “Nasty fuckers.”

Silence fell between us. My foot was still on the rock next to him. He was still fucking with my pulse just by existing. I had no idea if he was gay, straight or just a goddamned figment of my sex-deprived imagination, and what to say next was completely lost on me.

Fortunately, Connor spoke first. “Listen, um…” He paused, gnawing his lower lip. “There’s a place not far from here, maybe an hour once you get back to the main drag. Some of the most amazing pizza on the island. You, um, want to grab a bite?”

In spite of this unbelievable attraction, my first instinct was to back away and quickly decline, but this wasn’t some drunk Marine trying to coax me into a dark corner. Connor was as nonthreatening as a man could be. And so, so gorgeous.

The sequel to Conduct Unbecoming (can be read as a standalone).