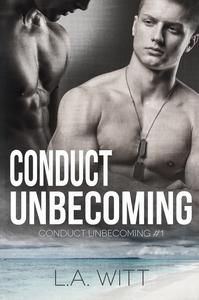 First class petty officer Eric Randall is less than thrilled about taking orders to Okinawa. Three long, lonely years on a crappy island that’s thousands of miles from his daughter? Oh. Yeah. Sign him up. But as long as he’s stuck here, he might as well make the best of it, so he discreetly checks out the local gay scene, where he meets Shane Connelly.

What starts as a one night stand leaves both of them wanting more, but then Eric finds out Shane doesn’t just outrank him, he’s an officer. DADT may be repealed, but an enlisted man getting involved with an officer falls under conduct unbecoming a gentleman and could cost both men their careers. They both have kids to take care of, future civilian careers to consider, and retirements on the line.

Still, they can’t resist each other. They discreetly spend nights together, and their mutual desire to explore the beautiful island of Okinawa is a perfect excuse to spend days together. As long as no one asks and they don’t tell, there’s no reason anyone has to find out.

But secrets like this tend to make themselves known…

When he walked into Palace Habu, I sat up so suddenly, I almost choked on my beer.

He’d never been here before; that much was immediately obvious. Maybe he was new to the island, maybe he was just new to the club, but he had that bewildered, fish-out-of-water look on his face of someone venturing into someplace unfamiliar.

Couldn’t really blame him. I’d given the place the same sweeping, disbelieving look when I stepped through that door a little over six months ago. Palace Habu was pretty much designed for sensory overload: flickering lights, bright colors, music videos playing on six different flat-screen televisions. A fog machine kept the air opaque on one side of the room, but an industrial-strength air conditioner prevented the place from getting too humid.

Whether or not it was deliberate, the gaudy, retina-searing sensory overload made it difficult for newcomers to make out those of us who were already in the bar, whereas a strategically placed spotlight made sure we all got a good, clear view of every man as he came through that door. In other words, if my commanding officer came waltzing in, I had a chance to make myself scarce before he saw me.

Which meant this new guy couldn’t pick me out of the onslaught of flicker-shadow-flicker, but I could see him. Oh God, could I see him.

He was obviously military. Of course he was. The vast majority of Americans on this island were, but he wore it even in civvies. The high-and-tight haircut was neat, but his dark hair was grown out enough on top to suggest he knew how far he could push the regulations. Even as out of place as he was, he didn’t give off much of a nervous vibe. He just looked like someone processing unfamiliar surroundings. He still had confident shoulders and fearless eyes, still carried himself like the kind of man who didn’t get intimidated but would look another man square in the eye even if he was intimidated.

He was the perfect combination of squared away and arrogant. Not enough of the former to be uptight, just enough of the latter to be irresistibly attractive. He must have been a pilot. They always carried themselves like that, and pilots were, as a rule, hot as hell.

I moistened my lips.

That wasn’t likely. Men didn’t come here to meet someone with whom they’d already crossed paths. No one came here just to hang out, and no one came here on dates. This wasn’t a watering hole; it was a hunting ground, and on an island where out, attractive gay men were difficult to find, a man had to move quickly if he saw something he wanted. My head wasn’t the only one that had turned when he walked in, and I’d be damned if anyone else got to him first, so when he started through the crowd toward the bar, I flagged down the bartender.

Gesturing toward the newcomer, I said, “Kono hito no bun wa ore no ogori.” Loosely translated, Whatever he’s drinking, it’s on me.

The bartender, a balding local in a red Hawaiian shirt, grinned and said something I didn’t catch over the music. Then he smiled and sidled down the bar toward the newcomer.

Over my drink, I watched, pretending the moisture on my palm was from the ice-cold glass of Orion in my hand.

At the bar, the newcomer stopped, probably poised to order a drink, but then did a double take and looked past the bartender. His lips parted. Yep, he was new to the island. Everyone had the same “what the hell” reaction when they saw Habu sake for the first time. It was, after all, a little unusual to walk into a bar and see a row of jars containing equal parts transparent amber liquid and angry-looking coiled snake.

He shook his head and returned his attention to the bartender. He placed his order, and while he waited for his drink, let his gaze drift to the Habu sake again. Grinning to myself, I wondered what he’d say if I suggested doing a couple shots of the stuff.

No, Connelly, don’t get ahead of yourself. Meet the guy first, then see what kinds of shots he’s willing to do.

The bartender slid the glass across the bar, and I held my breath as he put up his hand to reject the thousand-yen bill that came his way. He gestured toward me, and the newcomer’s head slowly turned. Through the fog-thickened air and the crazy lights, our eyes met. He raised his glass and inclined his head, a vague smile forming on his lips. I returned the gesture.

He broke eye contact as he took a drink, and I loosed a couple of curses that just got lost in the music anyway. But then he set the glass down, collected the yen he’d tried to use and slipped the bill back into his wallet. After he’d put his wallet in the pocket of his khaki shorts, he picked up his drink and started toward me.

Blood pounding in my ears, I casually hooked my foot around the leg of my barstool just to anchor myself in place. As he neared me, his features sharpened and came into focus like a developing Polaroid. High, smooth cheekbones. Disarming blue eyes. Lips that were probably always just on the verge of either a smirk or a devilish grin.

And just like that, some motherfucker with a death wish stepped into the five-foot gap between us and cock-blocked me.

I ground my teeth, glaring at the guy’s back. They both made a few small, casual gestures, as people do when making conversation, so I swore into my drink and turned back toward the bar. I wasn’t the type to give up easily, especially when I saw someone who intrigued me like this, but there was just enough of a wobble in the intruder’s posture to suggest he’d had a hell of a lot to drink. I was in the mood to get laid, not get into a bar brawl, and I had more than enough experience with rowdy drunks to leave well enough alone. No one in this place needed the JPs—Japanese Police—breaking up a fight and calling all our chains of command.

Oh, but for a man that attractive, I had to admit, it was tempting.

I took another drink and looked up at the backlit jars of Habu sake. The flickering strobes and wild disco lights rippled over the motionless, coiled snakes, which at least gave me something to look at besides someone else moving in on the guy who’d caught my attention like no man had in I didn’t know how long. Shit, maybe I was just way too horny for my own good tonight. It had been a while, after all. Maybe it was just that relentless itch to let some willing stranger distract me from how long it had been since the last willing stranger.

But…no, it was definitely him. Those eyes. That face. That bold I’m-completely-in-control way he carried himself in spite of being someplace unfamiliar. That…that…every thing about him. Even from halfway across the room, the man didn’t just radiate sex, he radiated the kind of sex I’d been dying to have.