Nate Bard is at his wit’s end. There’s something living—or not living, as the case may be—in his house, and if he ever wants to sleep again, it needs to go. Ever the skeptic, Nate balks at his sister’s suggestion of bringing in a psychic, but after another sleepless night, he’s desperate.

Enter Isaac Lane, the hot psychic who immediately senses both the ghost and the homeowner’s doubts.

Within minutes of Isaac’s arrival, weird things start happening. Though Nate hasn’t had a clue what’s been making this ghost so restless, now it seems the ghost is bent on getting the two men together. And neither Nate nor Isaac is able—or willing—to resist…

My sister, Jillian, shrugged as if we were just talking about the weather or something equally mundane. “Why not?”

“Uh, well.” I set my coffee cup on the wrought iron patio table between us. “Besides the fact that they’re full of shit?”

“And your house is apparently full of unhappy spirits.” She shrugged again, oblivious to the odd stares coming from other patrons, and rested her elbows on either side of her cup and saucer. “If you want to sleep in that place, I think it would be worth a try.”

I cringed. “I’m not that desperate.”

“You’re not that desperate yet. Or so you say.” She reached across the table and put her hand on my wrist. “I know you don’t believe in a lot of this stuff, but unless you’ve magically figured out what’s causing everything that’s happening in that house, and how to make it stop before it drives you insane, I think you should keep an open mind.”

I cocked my head. “Keep an open mind to other people who claim they can magically figure it out?”

She held my gaze. “Got any other ideas?”

“No, but I’m not hiring a damned psychic.” I shook my head. “If I have to, I’ll just sell the place and get the hell out of there.”

“In this market?” She laughed. “Good luck with that.”

“Hey, I’m just saying. The real estate market sucks donkey balls, and whatever is going on in that house could damage the value anyway.”

I groaned, rubbing a hand over my face. Just what I needed. A lemon of a house in a buyer’s market. And I didn’t even really want to sell the place. It was a charming little Cape Cod in one of those quiet cul de sacs that seemed like it was a million miles from everything, but was really only ten minutes from the freeway and five from the grocery store. I had every intention of staying there as long as I could. I’d already booted out the ex-boyfriend. All I needed to do now was get rid of…whatever the hell had moved in not long after he’d left.

“Well?” My sister inclined her head. “Are you going to make the call?”

She huffed. “Why not? What will it possibly hurt?”

“How much did you say he charges?”

She held my gaze, then gave a resigned sigh. “Three hundred.”

I arched an eyebrow.

Rolling her eyes, she blew out a breath. “It’ll be worth it when you can sleep at night.”

“Assuming it works. And in case it wasn’t painfully obvious, I’m not convinced it will.”

“That’s what you said about ghosts existing at all.”

“Yeah, and all I’ve seen is proof that something is going on in that house.” I shook my head. “What proof do I have that this guy isn’t a fraud, and even on that off chance that if he isn’t a fraud, how do I know he can help me?”

I sat up. “No, you’re not putting money in this guy’s pocket, especially not on my behalf.”

She shrugged. “Hey, I’m just trying to help you sleep at night, hon.”

“A wee bit. And aggravated. And sleep-deprived.” I brought my coffee cup to my lips. “Maybe I should see if Kevin will move back in. Let this thing terrorize him for a while.”

Her slender eyebrows climbed almost all the way to her hairline. “Please tell me you’re joking.”

“The part about letting his dumb ass back in.”

I scowled into my coffee. “Relax. He’s not coming back.”

She stayed tense. “Nathan Bard, you listen to me. I don’t care how desperate you are to get this thing out of your house. You take that asshole back, and the ghost will be the least of your problems.” The arch of her eyebrow became playfully menacing. Definitely more menacing than playful, though.

I sipped my coffee. “It’s a moot point since he’d never take me back.”

“Well, then that’s the one good thing that fuckwit has ever done for you. Good riddance to bad rubbish.”

Laughing dryly, I set my cup down. “Jesus, Jill. Tell me how you really feel.”

“That was rhetorical,” I said through gritted teeth. “And like I said, it’s moot anyway. We’re done. I just wish this…whatever the hell it is would go live with him instead of me.”

She smirked. “Well, I wouldn’t put it past him to haunt you.”

“First off, he’s the one who left, so I should be haunting him. Second, don’t you have to be dead to haunt someone?”

“That could be arranged,” she deadpanned.

“I’m kidding.” She touched my arm again. “But I know this thing is driving you insane, and maybe if you call that psychic, he—”

“It was worth a try.” She glanced at her watch. “Shit, I have to go.” As she gathered her purse and rose, she added, “At least promise me you’ll think about calling the psychic.”

“I just told you, I’m not calling a psychic.”

“And you haven’t thought of any alternatives, so just promise me you’ll think about it.”

I glared at her, then sighed. “Fine. I’ll think about it. I promise.”

She eyed me. “I mean really think about it. Not ‘I’m going to think about the fact that I’m never going to do it.’”

I laughed. “You know me too well.”

I stood, hugged her goodbye, and then returned to my seat as she headed out of the coffee shop’s patio area. Alone with my cooling coffee, I sighed. Maybe I shouldn’t have told her about all the weird stuff going on in the house. I should’ve known she’d want to bring in a psychic or something equally weird. She’d already sneaked a couple of crystals into my living room to try to do something or another with the energy that was in there. I’d only found out about those when the “energy” had used them to shatter a picture frame.

Good thing the picture had been one I didn’t like anyway. The only reason it had been on the wall in the first place was because I hadn’t had any other place to put it while I’d waited for my ex to swing by and pick it up. Oh well. Into the trash it went. Maybe those silly crystals had done a little bit of good.

All I knew was, whatever the fuck was going on in my house, I’d resolve it. I had no idea how, but damn it, the solution would not involve pouring money into the pocket of some shady “psychic” who preyed on the gullible.

Not a fucking chance. 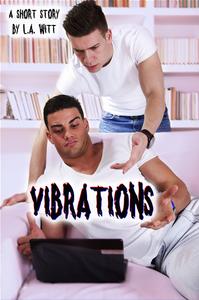