Weeks before their twenty-fifth anniversary, Greg Douglas’s wife surprises him… with a divorce. Now he’s staying with his friends Ethan and Rhett while he gets back on his feet. To take his mind off things, the guys decide it’s long past time for Greg to explore the other half of his bisexuality. He’s never been with a man… until tonight. After repressing those desires for a quarter century, he’s not waiting any longer. Especially not after he lays eyes on the gorgeous deejay at Wilde’s.

Deejay and single dad Sailo Isaia isn’t looking for anything serious. He’s definitely not out to be a sexual teacher, never mind to a man almost a solid decade his senior. But as Greg gets the hang of having a male lover, Sailo can’t help himself. They both keep coming back for more. And more. And more.

But is this just a midlife crisis and a rebound? Or is it turning into something both men never realized they were missing? And will Greg figure out the difference before Sailo decides he and his son deserve better?

Contains an older guy who’s waited half his life for this, a younger guy who didn’t realize how lonely he was, and some very hot visits to the upstairs VIP lounge at Wilde’s. Author is not responsible for readers who can no longer look at a leather booth the same again. 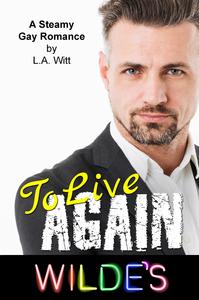 “Well, that part’s done.” I dropped onto a barstool at the island in Rhett and Ethan’s kitchen. “Thanks again for all your help.”

Rhett nodded. “Just let us know if you need help moving it all from the storage unit to your new place.”

“Will do,” I said. We’d just killed an entire Saturday lugging a million pounds or so of my stuff into my storage unit, and a handful of boxes into their downstairs bedroom, where I was living for the moment. When they’d found out that I was living in a hotel while I made arrangements to move into an apartment, they’d insisted I stay with them, and they’d been a godsend when it came to the grunt work. “Question is, what now?”

“That goes without saying,” Rhett said. “I think we all could.” While Ethan pulled three bottles from the fridge, Rhett watched me across the island. “So, you doing all right?”

I shrugged. “I’m not really sure what counts as ‘all right’ in this situation.”

Sighing, he nodded. “Yeah, I get that.” As Ethan uncapped each of the bottles, Rhett rested a hand on the small of his back. “When we were separated, I just felt completely lost for a while.”

“Me too.” Ethan looked at him, and their eyes locked for a second. I could almost feel the brief spike in tension, as if they’d both been hit by a sudden wave of shit, what if we’d never fixed that? at the same time. Then they shook it off, and Ethan kissed Rhett’s cheek before turning to me again. “It’s not easy.” He slid the bottle across the counter. “And we’re serious—you’re welcome to stay here as long as you need to. We both know damn well how long it can take to find your bearings.”

He sipped his beer and rested his other hand on top of Rhett’s. My chest tightened, and I pulled my gaze away from their hands.

“Well.” I took a deep swallow of beer. “I’m afraid I don’t see me and Becky putting things back together like you two did. I think… I think I’m just still in shock.” Pressing the bottle against my forehead, I muttered, “Maybe I should’ve seen it coming.” I lowered the bottle. “Be honest. Am I an idiot for being surprised?”

“No, but…” Ethan shifted his weight. He turned to Rhett, eyebrows up as if to say help me out here.

“Well…” Rhett hesitated. “No, I don’t think you’re an idiot. It’s a lot easier to see things from the outside than the inside.”

I drank a little more beer. “So, did you guys see something I didn’t?”

Rhett fidgeted beside his husband. “To tell you the truth, neither of you have ever seemed particularly happy. Not as long as I’ve known you.”

“He’s right.” Ethan’s voice was unusually gentle. “I don’t think I ever saw you argue with her, but you both seemed…well, pretty miserable whenever I saw you together.”

Staring into my beer bottle, I sighed. They were right, and I’d known for a long, long time that something was wrong. I’d just imagined us working it out, maybe seeing a counselor or whatever. Once the kids were grown and the chaos of raising them was over, we could focus on us. That was how it had played out in my head, anyway.

But then, our youngest went off to college, and suddenly we had an empty nest, and my wife decided it wasn’t empty enough.

Ex-wife. It wasn’t final yet, but…ex-wife.

Tomorrow was twenty-five years since we said, “I do.” Today was three weeks since she said, “I’m done.”

“Well…” I exhaled, thumbing the label on my beer. “I really appreciate you guys letting me crash here. Hopefully I’ll be out of your hair before too long.”

“Thanks.” I swallowed and then looked up at them. “If you don’t mind my asking, what did you guys do when you were first separated?”

“We were stuck under the same roof.” Rhett wrapped his arm around Ethan’s shoulders. “That was, uh, not a fun period.”

“I can imagine,” I said. It had been awkward enough, coming by the house while I got my shit together and moved out. Having no choice but to live together through all of this? “That must have been hell.”

Ethan gave a dry laugh. “That’s probably why we both spent a fair amount of time getting laid.”

“What?” Ethan shrugged. “Don’t act like it isn’t true.” Gesturing at me with his beer bottle, he added, “Greg might find it…I don’t know, useful.”

I chuckled. “I have to admit, I’ve thought about it. Becky and I weren’t, uh…for a long…” I exhaled hard, my shoulders sagging. “Guess that should’ve been a sign, shouldn’t it?”

“Sometimes it is,” Ethan said. “Sometimes it isn’t. But all joking aside, it can be good to put yourself back out there, or it can make things worse. I needed to blow off steam. You might need more time.”

“Blowing off steam does sound pretty tempting. Maybe I—” I hesitated, my stomach twisting with panic, but really, if I was going to finally say the words out loud, these two were hardly going to give me hell for it. Could be a good opportunity to get the hang of admitting things about myself that even my wife—ex-wife—didn’t know. I tamped down the panicky feeling and quietly said, “Maybe I need to find a guy this time.”

Rhett choked on his beer, clapping a hand over his mouth as he nearly spat it across the counter.

“I told you!” Ethan laughed. “I fucking told you!”

I blinked. “You told him, what exactly?”

Rhett finally recovered, clearing his throat a couple of times, and I couldn’t tell if his cheeks were red from coughing or from something else. “We, uh…” He glanced—more like glared—at Ethan before turning to me. “Ethan said a while back he thought you might not be completely straight.”

I lifted my eyebrows. “So what gave me away?”

Rhett turned to Ethan again, silently putting the ball back in his court.

This time it was Ethan who blushed a little. “Uh, one of our house parties last year. I don’t know, something about the way you were looking at Sebastian.”

“Sebastian?” I cocked my head. “Which one was he?”

“Oh. Right. Him.” Yeah. Him. I took another deep swallow, hoping they didn’t notice the shiver that ran through me. I’d seriously considered getting my first tattoo just as an excuse to have that guy’s hands on me. “He was, uh, pretty hot.”

I chuckled into my beer bottle. “That wasn’t the reaction I expected the first time I told someone I’m into men.”

Rhett elbowed Ethan. “Always expect the unexpected with this one.”

“Not gay.” I shifted in my seat. “I definitely still find women attractive. And I’ve, well…I guess you’d say I’m bi-curious since I’ve never actually been with a man.”

They both blinked, and in unison asked, “Never?”

“Never.” I played with the label on my beer again, self-conscious under the weight of their stares. “I’ve been married since I was twenty-two. Didn’t figure out I was even attracted to men until after that, and didn’t admit it to myself until my mid-thirties. So…never had the opportunity. Maybe now’s as good a time as any.”