Gene Caldwell has given up on love. After two messy divorces and countless failed relationships, he’s sixty-one, he’s single, and he’s done trying.

Terry Hanson still believes in love, but after burying two partners in thirty years, he’s prepared to spend the rest of his life alone. Even if the nights get cold, he refuses to go through that heartbreak a third time.

At a mutual friend’s wedding reception, the two men bond over their loneliness and cynicism. They spend the evening commiserating… and the rest of the night pretending they’ll be able to walk away from each other in the morning.

Neither can help coming back for more. They can't get enough of each other’s touch, the affection they’ve both been starving for, and the companionship they both crave and fear.

If they lower their decades-old defenses, they’ll risk more heartbreak. If they don’t lower those defenses, though, they’ll miss out on love that was worth waiting half a century to find.

This 97,000 word Las Palmas Fencing Club novel is the sequel to The Master Will Appear, and can be read as a standalone.

TITLE: The Walls Between Hearts 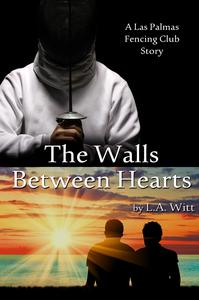