The Only One, Book 2

Months after a bullet ended his SEAL career, Senior Chief David Flint doesn’t know which is worse: struggling to adjust to life as a civilian, or watching his lover, Lieutenant Commander Josh Walker, leave for one deployment after another.

Missing the career he loved—and knowing all too well the danger Josh faces—doesn’t  help. And as Josh walks out the door for another assignment, David can feel their relationship cracking under the strain.

With so little time between assignments, Josh has no idea how to fix things with David. One thing he’s sure of, though—if they don’t find a way to resolve the rising tension between them, there’s a storm coming they might not be able to weather. But he plans to give it his best shot.

When he gets home,

Assuming he makes it home alive…

Contains plenty of smoking hot sex between two dudes who just wanted to be SEALs, not deal with all this romance crap. They went and fell in love anyway, and now have to figure out how to  make it work while saving the world and teaching their puppy not to beg. 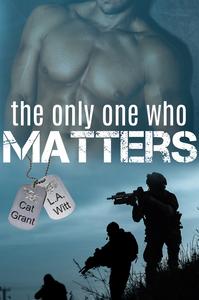 TITLE: The Only One Who Matters