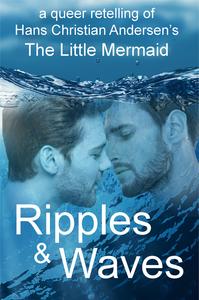 Colin Everroad should be dead, but after his lobster boat founders during a violent storm off the Maine coast, he wakes up on a beach. He’s cold, but unscathed… with strange memories of a face he can’t conjure and a voice he doesn’t recognize.

No one can explain it, but a friend suggests Colin was saved by one of the mer. Except the mer don’t exist. Do they? But… that face. That voice. Someone was in the water with him. Someone saved him. If not a mer, then who? And whoever it was, Colin wants to see his face.

Lir broke protocol by rescuing a land person, but he couldn’t just let the man drown. When he disobediently resurfaces to see his beautiful land man, he knows it’s only a matter of time before he’s forbidden to leave the depths again.

One clandestine visit turns into more. Soon, Colin and Lir are meeting at the shore as often as possible, and the connection between them deepens. The only problem is that neither can live in the other’s world. Or can they?

Then Lir finds a way for them to be together, but only for a little while… and at a cost. As time grows short, they have to choose: does Lir return to the sea and never see Colin again, or stay forever with the man he loves in a world that will never love them?

“Sir? Sir?” Something tapped against my cheek. “Can you hear me? Are you all right?” A firm hand shook my shoulder, which made everything hurt from my head to my toes. Well, hurt more. My entire body throbbed like one big bruise and ached like I’d been wading in the freezing cold water. That probably meant I was partly numb too. So once that wore off, I’d hurt even more. Fuuuck.

“He’s alive. Is that ambulance on its way?”

Ambulance? And…on its way where? Where was here? Where the hell was I?

I forced open my burning eyes but then immediately slammed them shut to avoid the blinding sunlight. Groaning, I covered my face with an aching hand.

“Oh!” The woman sounded closer this time. “He’s waking up!”

“Sir?” The hand shook my shoulder again, which jostled my entire sore body.

I rubbed my eyes but only succeeded in getting sand in them, not to mention in my mouth. “Damn it,” I muttered and turn my head to spit out the sand as I tried to blink out the grit. The ground beneath me was solid, but not—it gave when I shifted, but not enough to collapse under me.

Sand. I was lying on sand.

When a few tears had finally flushed the sand out of my eyes, I tried again, squinting against the brutal daylight. A middle aged couple were crouched beside me, their faces full of concern, and the woman clutched a cell phone in her hand. They were dressed like tourists—sandals, sunglasses, shorts, and brightly colored T-shirts that I recognized at a glance with their touristy Maine-themed slogans (Lobstah Time on his, Bah Hahbah on hers).

“Are you okay, son?” The man’s hand was still on my shoulder. “Too much to drink last night?” He was obviously trying to make it sound like a joke, but he couldn’t hide his concern.

“Yeah, I…” I blinked a few more times, then gingerly pushed myself upright. I didn’t really like strangers touching me, but I appreciated his help. My head was throbbing and light, and my muscles felt all rubbery like I’d been swimming in cold water. Wait—had I?

In my mind, there was a flash of memory. Icy water. Strong waves. Sure hands keeping a firmer grasp on me than this concerned stranger did now.

A breeze blew past, and on some level, I knew it was warm, but it made me cold all over, especially when it hit my drenched T-shirt and jeans. Shit, had I been swimming?

The water’s edge was several feet away, the tide lapping lazily at an indentation in the sand beside some drag marks that led to…me. There was sand under my clothes, so had… Had these people dragged me away from the water? And how the fuck had I ended up in the water in the first place? This could’ve been the hottest day in August—I was pretty sure it was still barely June, though—and the Atlantic off Maine’s Downeast coast would still be cold as balls. That was the kind of water kids swam in to prove they were tough. No grown adult in their right mind jumped in that water.

Another flash: not jumping in—falling in. Tumbling against something solid, then weightless, then enveloped in salty, violent cold.

I shivered hard, as if I could still feel that cold on top of the chill from being soaked to the bone and dressed in wet clothes.

“Honey, grab him a towel,” the man said. “And where the hell is that ambulance?”

I wanted to protest that I didn’t need an ambulance, but maybe I did. If I was this disoriented, I might’ve hit my head or something. And from the parched saltiness in my mouth, I had a feeling I’d swallowed a hell of a lot of water. Was it in my lungs? Was this one of those things where they pulled a person out of the water, but then their lungs filled up later and they drowned in their own bed?

Yeah, okay, I could live with an ambulance.

“Why don’t you take off your shirt, sweetheart?” The woman held up a fluffy blue beach towel. “This will warm you up.”

Something warm and dry? Hell yeah.

Hands shaking and arms still rubbery, I started to peel off my shirt but gasped when fiery pain lit up my sides. All the way from my armpits down to just below my ribs, my skin and muscles felt ripped apart.

“I…” Couldn’t he see? Wasn’t there blood dripping down my sides and staining my shirt?

My faded yellow T-shirt was wet and dirty, and something had torn it, but there was no blood. Or, well, not much. There was a smear that looked like blood, but for all I knew, that was a barbecue sauce stain from when I’d been eating on—

I’d picked up an order of chicken tenders from a place I liked near the Bar Harbor waterfront, and I’d gotten on the boat, and I’d eaten while I’d driven the boat out to empty lobster traps. At some point I’d muttered, “Damn it,” because some barbecue sauce had dripped onto my shirt.

Eh, I’d thought in the moment. I’ll put some stain remover on it when I get home. No biggie.

Why did that feel like days ago? And why couldn’t I get a solid grasp on anything that had happened between then and now? Between there and here? And seriously, where was here? And when was now? What the hell had happened to me?

“Son?” The man jostled my shoulder gently. “You okay?”

Oh, God, I was the farthest from okay I could remember being, and my memory was too cloudy to be sure if that meant I’d never been this shitty or I just couldn’t remember, and realizing that didn’t help at all.

I swallowed hard, suddenly sure I was about to puke. “Uh…”

“Let’s get that shirt off. You’ll be a lot warmer in the towel.”

I glanced at his wife. She was still holding the fluffy blue towel, and hell, the pain in my sides made me want to either cry, get sick, or both, but the cold fabric sticking to my skin was suddenly gritty and clammy. With some cursing and some nauseating pain, I managed to peel off the T-shirt and drop it onto the sand with a soggy splat. Then the woman wrapped the towel around my shoulders, and I had to fight back a delirious groan. I remembered that I’d always loved the feeling of wrapping myself in a sun-warmed towel after I’d been swimming, but I knew for a fact—scrambled memory be damned—that it had never felt this good. When was the last time my skin had touched anything dry, soft, or warm? Too long ago.

I closed my eyes and let my head fall forward as I pulled the towel tighter around me. I was still cold, my teeth still trying to chatter and my muscles still aching like I’d been in the water too long, but there was warmth now. And this reassuring feeling that while this wasn’t over, it probably wasn’t going to get worse.

Except last time, there hadn’t been a towel around my shoulders. I hadn’t been on dry land.

I jumped as the whisper echoed in my mind. Where the hell had that come from? It was a voice I couldn’t place, spoken by a man whose face I couldn’t conjure. There’d been chaos and fear and confusion and then…reassurance. Safety. Protection? And…

I brought a hand up, paused to dust the sand and grit off my fingers, and rubbed my tired, burning eyes. Okay, whatever had happened between the chicken tenders and my carcass landing on this beach, I must have been out cold and wound up dreaming. Or hallucinating. Was there even a difference?

I tried to grab hold of the images flashing through my mind, but they were quick and slippery. Focusing on one was about as effective as grabbing a minnow with my hand—no matter how quick I was, the best I could get was a handful of nothing.

“Oh, there they are!” the woman exclaimed. “It’s about time!”

I lifted my head and blinked against the daylight again. That was when I heard the distinctive rumble of a diesel engine.

“Over here!” Her voice was getting farther away, as if she were jogging to meet the paramedics who’d apparently arrived. “He’s awake!”

Maybe “awake” was being generous, but at least I wasn’t unconscious. I was pretty sure I had been for… for a while. Except it couldn’t have been that long if these people had found me lying in the surf. I was no expert on hypothermia, but I was pretty sure that if I’d been passed out in the water for as long as it felt like I had, I should’ve been a hell of a lot more hypothermic than this.

What on earth happened? And when did it happen?

Footsteps came up behind me. The woman was talking quickly to someone, but I didn’t catch everything she said. Then someone walked around me and squatted in front of me.

He was a round-faced white guy, and he took a breath like he was about to speak.

But then he froze.

That was the thing about small tourist towns like this. The streets may have been teeming with unfamiliar visitors this time of year, but the people who lived here? We all knew each other on sight. If you’d lived here for more than a year or two, you couldn’t go to dinner or goddamned Walmart without running into half a dozen people you knew.

So I guess it wasn’t really a surprise that I recognized the paramedic staring back at me. He was Brad Howard. We’d gone to high school together. We’d sat together in Geometry one semester.

And even if I hadn’t recognized him, he probably would’ve recognized me. That was the thing about coming from one of those families with too much money and power— everyone in goddamned Downeast Maine knew who I was.

“Oh my God.” Brad laughed and shook his head as he clapped my shoulder. “Jesus Christ. There are a lot of people who are going to be thrilled when they hear about this.” Then he looked past me. “Hey, Jessica? Put in a call.” His eyes flicked back to me, wide with wonder. “We just found Colin Everroad.”