Rhythmic rainfall tapped my office window, the gentle monotony adding to my late afternoon fatigue. I pushed aside a stack of exams and leaned back in my chair as I rubbed my tired eyes. A few more weeks of giving and grading tests, and this semester would be over. Not a moment too soon, as far as I was concerned.

I glared at the exams. When I was sure the bastards weren’t going to grade themselves, I swore and picked up my pen once again. As soon as I started reading, though, the words on the page started to run like rain sliding down glass.

A Red Bull. That’s what I needed. Maybe two.

I didn’t have any change in my pocket for the vending machine, so I leaned down to fish around in my desk drawer.

Come on, come on, I know I saw a few quarters in here the other day. There has—

Someone knocked. I rolled my eyes and swore under my breath. I didn’t have any student appointments this afternoon, so whoever this was, they’d better hope it was quick.

“It’s open.” I continued rifling around for change as the door opened. I wasn’t out to be rude, but damn it, I needed that Red Bull stat.

My hand stopped moving. It was a stranger’s voice, but something about it was familiar enough to make my blood run cold. When I looked up, even colder.

The family resemblance was undeniable. The same dark hair and darker eyes. The same sharply angled jaw and chiseled cheekbones. The same broad shoulders, which were currently bunched with tension beneath a brown leather jacket.

He closed the door behind him and leaned against it. “Yeah, I…” He set his jaw and looked me in the eye. “I’m Tristan Walker.” Another pause. “Dustin’s brother.”

The introduction wasn’t necessary. He was a couple of inches taller than my boyfriend and lacked the goatee, but he was as close to a doppelganger as any twin could have been.

We stared at each other in silence for a moment. He didn’t extend a hand. Neither did I.

I cleared my throat. “This is…unexpected.”

Tristan shifted his weight. He put his hands in his pockets and stared at the floor. “Yeah, I—” His eyes flicked toward my abandoned exams. “I, um, haven’t caught you at a bad time, have I?”

“No, no, now is fine.” I pushed aside the exams again and gestured at the chair in front of my desk. “Nothing that can’t wait. Please, have a seat.” My heart pounded. So much for needing that emergency Red Bull.

He hesitated before accepting my invitation. The muffled squeak of his leather jacket was the only sound in the room as Tristan eased himself into the chair I’d offered. Most of the teachers and professors here had their guest chair at the end of the desk. I preferred to have people sitting across from me, and my rather cramped office didn’t allow for the more traditional configuration anyway.

Now, with my boyfriend’s estranged brother sitting across from me, I was more than a little thankful for the desk between us.

Tristan leaned heavily on the armrest, thumbing his chin as his eyes darted around my office. I didn’t speak, just let him take in his surroundings. I’d watched a few nervous students do the same thing during pauses in conversation. I knew the visual trajectory by heart, and Tristan followed it just like everyone else did: Generic motivational poster. Bachelor’s degree. Doctorate. The plaque from last year’s faculty billiards tournament.

When he got to the framed photo on the file cabinet, his lips tightened into a bleached line and he immediately shifted his gaze to the floor. To anyone else, it was just a picture of the grinning first and second place winners of another pool tournament.

Tristan knew better. The man with his arm around my shoulders in the picture was, I had no doubt, why he was here.

I resisted the urge to tap my fingers on my desk. He unnerved me, and I didn’t want him to see it. Not until I had some idea of exactly why he was here. He was impossible to read just now. Every move he made spoke of tension, but what kind? Was he hostile? Nervous? I didn’t know what to make of his presence. He hadn’t spoken to his brother in two years because of our relationship, and now here he was in my office. His silence could have been from his own uneasiness, or it could have masked something more menacing.

The hand stuffed into his jacket pocket made me nervous. He could be hiding a gun. Another weapon. A balled up fist. It wouldn’t be the first time I’d gotten a fist in the face from someone unhappy about a brother’s sexuality. To be fair, that angry brother had been mine, but I still didn’t draw an easy breath, even as Tristan pulled his hand out of his pocket and laid it across his lap.

The silence was about to drive me insane, so I shifted slightly and cleared my throat. “Well, this is a surprise. What can I do for you?”

My voice startled him. His eyes flicked up to meet mine for a fleeting second before he dropped his gaze again. “Listen, Dr. Stew—”

He stiffened slightly. His Adam’s apple bobbed once and he fidgeted in the chair. First name familiarity probably made him uncomfortable. I couldn’t say I particularly cared. “Okay. Brandon. Listen, I… I wanted to talk to you. About…my brother.”

“I figured as much.” They hadn’t spoken in two years. Not since he’d found out Dustin and I were dating, and by extension, that Dustin wasn’t straight.

Drumming his fingers on the armrest, Tristan looked me in the eye with what seemed like a tremendous effort. “I understand you and Dustin are getting…” He trailed off. Cleared his throat. Shifted in his chair. “That you’re…”

He grimaced. “Yeah. I guess that’s the word.”

I shrugged. “Engaged. Getting married. Doing a commitment ceremony.” I narrowed my eyes and couldn’t quite resist injecting some ice into my voice as I added, “Whatever option hasn’t been denied us by society’s collective disgust.”

He leaned back in the chair and ran a hand through his hair—exactly the way Dustin often did when he was nervous. “Okay, so, apparently this…what you guys… It’s not…” He swallowed. “Not temporary, I guess.”

“Sorry,” he growled. “It’s not exactly an easy thing to get my head around.”

I raised an eyebrow. “My apologies,” I said through my teeth.

Tristan sighed and broke eye contact, looking past me instead of at me. “How did—” His lips twisted into a scowl before he dropped his gaze to the desk between us. That photo must have caught his eye again. Focusing on something presumably safer—the neglected stack of exams, probably—he went on. “How did he not know all that time? That he was gay?” He pursed his lips and shook his head. “Twenty-eight years old and he suddenly figures out he’s into men? I don’t get it.”

I shrugged. “I seem to recall he was busy for most of the preceding decade being the faithful half of a messed-up marriage.”

“Listen, your brother’s sexuality isn’t up for debate.” I folded my hands on my desk and leaned forward, inclining my head slightly. “I assume there’s a reason you went to the trouble of finding me and coming into my office?”

He was silent for a moment. “When are you guys—” He swallowed. “Getting married?”

“We’re not sure yet. Still making plans.”

His eyes narrowed. “This is going to kill my mother.”

I fought to keep from rolling my eyes. “And the cold silence from half his family hasn’t been killing your brother for the last couple of years?”

He flinched and dropped his gaze. Blowing out a breath, he rubbed the back of his neck. When he looked at me again, I expected anger and hostility, but nothing of the sort met my eyes. He looked nothing if not…pained?

“That makes two of us.” I hadn’t intended to sound quite so cold that time, but I didn’t apologize for it. His presence still made me uneasy, and his intentions were still unclear. The defenses were staying up until he gave me reason to drop them.

“Maybe I was too quick to blow Dustin off. And to write off the two of you. I thought…” He looked down. Ran a hand through his hair again. Then he pushed out a breath. “Could I ask a favor?”

I cocked my head. “What favor?”

He cringed as if he were already anticipating a hard no. “Would you just ask Dustin to give me a call?” 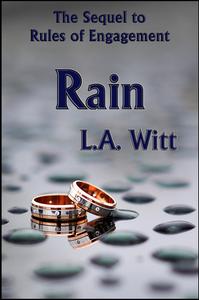 It's been two years since Brandon Walker and Dustin Stewart started dating, and the rift between Dustin and some homophobic family members hasn’t even begun to heal.

But now, as Dustin and Brandon plan their wedding, his brother Tristan reaches out with a tentative olive branch.

And maybe, just maybe, if Dustin and Tristan can reconcile, there’s hope for Brandon and his own estranged brother.

Has sixteen years been long enough? Or are there some wounds that even time can’t heal?

This 20,000 word novella is the sequel to Rules of Engagement, and was previously published.

The sequel to Rules of Engagement.