Marcus had had a crush on both grooms for as long as he’d known them. Well, okay, that had only been a few months, but still. Chris was smoking hot, and his French-accented fiancé Julien was…yeah. Hot. So Marcus had come to the wedding with every expectation of ogling the two men getting married.

What he hadn’t counted on was the best man. One of the best men. The one standing behind Julien. That one.

The ceremony was the same script as every ceremony—Do you? Do you? Let’s eat cake—so it wasn’t like Marcus needed to hang on every word. And he’d helped the guys with their vows, so he’d heard them already. Which was good, because he spent the entire ceremony completely focused on that guy standing behind Julien.

For one, he was built—the kind of tall and broad-shouldered that required an expensively tailored suit to look smooth, though the rent-a-tux shop had done a good job matching him up, despite his height and wide shoulders. Black hair, shorn at the sides, just slightly longer on top. And although he was built like a guy who could take a truck apart with his bare hands, his demeanor was sweet and attentive, watching over the couple like a very big and devoted dog. A gentle, unflappable presence that shouted calm and reliable, rather than aloof or arrogant, and Marcus was a sucker for the type.

He’d been distracting enough during the ceremony, the receiving line, the speeches and all of the usual this is a wedding so we must do this, just play along crap that Marcus so loved. Not that he was bitter or anything about how this all had reopened the rather raw wound left by his divorce.

But now the music was blasting, and everyone was crowded onto a dance floor that was probably meant to hold about a third of this particular group. Marcus stood back and watched, hoping to God they didn’t do the chicken dance like everyone seemed insistent on doing at weddings these days. It didn’t annoy him—well, no more than it annoyed anyone—but that irritating upbeat music reminded him a little too much of how Ray had, during the same dance at their wedding, taken advantage of the loud tune to whisper in Marcus’s ear the things he had planned for their honeymoon suite that night. Damn it. He was probably the only one on the planet who got teary-eyed hearing the goddamned chicken dance.

It hadn’t been played so far tonight, though, and he hung back, drinking a whiskey sour that was a little weaker than he would have mixed it, but strong enough to make his head pleasantly light. He watched, laughed at some of the drunken antics, and, in spite of the sting of being a too recently divorced man at a deliriously happy wedding, he was having a pretty good time.

The bizarre accent should have tipped him off. French? Some Eastern European accent? A mix of the two? Nothing he’d ever heard before, anyway. Which meant it shouldn’t have surprised him when he turned his head and saw…that guy.

“I…” Marcus cleared his throat. So he hadn’t imagined how green the best man’s eyes were. Holy Christ. They were even more surprisingly intense because he hadn’t expected that color with almond-shaped eyes. “I’m, uh. Not much of a… I have…” Come on, come on. Speech. English. You know this! “I have two left feet.”

The guy cocked his head, genuine confusion furrowing his brow. His gaze flicked down toward Marcus’s highly polished shoes, then came back up. “Two left feet?”

“Yeah, you know.” Marcus nodded toward the dance floor. “I can’t dance.”

“Because you have two left feet?”

“Yeah, I—” Oh. Oh. Right. Accent meant he came from somewhere other than the States, and there was a good chance English—especially American slang—wasn’t his first language. In fact, now that Marcus had a chance to look at him up close, it occurred to him that Julien’s best man must’ve come from wherever Julien himself had come from before shacking up with Chris. French Foreign Legion, wasn’t that what Chris had said? Well, whatever the case, there was no way this guy had acquired that tan in Seattle.

The stranger looked him up and down, but not in a teasing, flirting way, then cracked a smile. “You’re not drunk enough.”

Maybe not. Though Marcus preferred to stay in control of his senses and emotions while in this kind of mood. “I still have to drive.” He lifted his glass. “This is as much as I’ll drink.”

Marcus had braced himself for ribbing or mocking—after all, the alcohol was free, and what was a party without getting shitfaced—but the guy just nodded to him. Silence settled, three seconds, four, five, hitting the point of say something or find a reason to turn away to keep face. And maybe he should have turned away, though the man did intrigue him, partly because of that strange, steady calm so at odds with the other laughing, partying guests, and partly because he looked like nobody Marcus had ever seen.

“I figured.” Marcus was happy for him to keep his hand a little bit longer than a handshake warranted. “I hope you don’t mind me asking, but you’re from the Legion too?”

“Yes. Between contracts. Promised Julien to come over for his marriage.” He turned around, seeking out Julien in the crowd. Julien and Chris were posing in front of the rainbow-colored wedding cake for photos with Julien’s vast family. His expression was hard to read—maybe part bemused confusion and part wistfulness.

“This whole thing must look strange to you.”

Timur looked back at him and lifted his wide shoulders, and the whole tux lifted with them. “Not expected, no.”

Marcus reached out for a passing waiter and plucked a fresh glass of rum and coke off the tray, offering it to Timur. They both weren’t drunk enough for this, apparently. Timur took it, lifted it and smelled it, then took a mouthful. Every one of those movements was a little tentative and awkward. Yep, fish out of water.

“Your first time in Seattle?”

“Where are you from?”

Timur gave a quiet laugh, one that disappeared into the background music, and lifted his drink to his lips. “That’s a complicated answer.”

The man rolled a sip of rum and coke around in his mouth for a moment, subtle, smooth motions of lips and jaw that had way too strong a hold on Marcus’s attention. Timur was clean-shaven, but Marcus caught himself wondering if that was as normal for him as the tuxedo. Something about him convinced Marcus that this man’s natural state included at least a few days’ worth of stubble on his sharp jaw and down onto his throat.

And suddenly Marcus’s drink was not nearly cold enough, despite being comprised almost entirely of ice. When the hell had he drunk the majority of it? And where was that waiter? 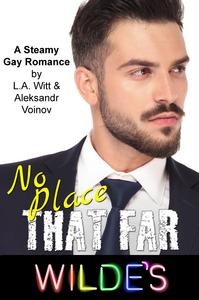 Sometimes you only get one chance at a second chance.

Still finding his footing after a long-overdue divorce, Marcus is looking forward to some mind-numbing drinking while ogling the grooms at Chris and Julien’s wedding. He never expected his attention to be diverted by the gorgeous best man. One of Julien’s French Foreign Legion buddies, Timur doesn’t speak much English, but language is no barrier to Marcus understanding exactly what the huge Tartar wants—a one-night stand.

Except that one night turns into two, three, then more, which puts Marcus on edge. After Timur is done house-sitting for the honeymooning couple, he’s headed back to the Legion for another five years. Like it or not, once Timur gets on that plane, the fling is over.

Unfortunately, Marcus forgot to tell his heart not to fall in love. And this time, if history repeats and he makes another wrong decision, he may never see his tattooed Legionnaire lover again.

Contains a soldier who makes up for his lack of English by using his hands to read his lover’s body; a chef-turned-bartender who no longer believes in love; a length of paracord that probably wasn’t meant to be used this way; and a couple of newlyweds who are game for some four-way play.

TITLE: No Distance Left to Run