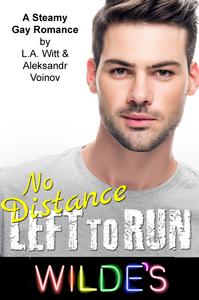 After Chris’s best friend Joshua died during a two-year mission, the once devout Mormon lost his already crumbling faith. Ostracized from his family and the only community he’s ever known, Chris had no choice but to find his way on his own. Now he’s going to school and loves his job as a bartender at Wilde’s, and four years after Joshua’s death, he’s moving on.

But Joshua isn’t dead, and now he’s back in Chris’s world. Returning to Seattle to make peace with his dying father, Joshua has a new name, a new accent… and old feelings for Chris that are alive and well.

Forgiveness doesn’t come easy for anyone, but just as Chris is accepting that the man he loves isn’t going to run away this time, their families threaten to pull them apart all over again…

Contains two lost boys who’ve finally found each other again and need to make up for a hell of a lot of lost time. There’s also a military uniform, a tuxedo, and a knife. In the same scene. And yes, it’s that kind of scene.

This 57,000 word novel was previously published.

At twelve thirty on the nose, Deb pulled into the parking lot of one of those insanely healthy vegan cafés in Fremont, just outside of downtown Seattle. Hope you’re buying this time, I thought. Places like this were not cheap.

As soon as I saw her, my heart dropped. She always looked tired—six kids under seven will do that to you—but she was tense. Really tense. Nervous.

“Yeah. I’m fine.” She pulled back and plastered on a phony smile that was totally out of character for her. This wasn’t good.

“How’s your dad?” I asked quietly.

Deb straightened a bit, the smile faltering. “He’s not well, but that’s not why I’m here.” She gestured at the coffee shop. “Let’s go in and sit. I…need to talk to you about something.”

She shook her head. “I don’t think this is—”

“Please. No beating around the bush.”

She held my gaze for a moment and then swallowed hard. “It’s about my brother.”

Something twisted deep in my gut. She had four brothers, three of them still living. I cleared my throat. “Okay. Which one?”

Deb locked eyes with me, though it seemed to take a lot of effort. “Joshua.”

I winced and shifted my gaze away. “How in the world is this urgent, then?” Unless someone had found his body. At least then, maybe we could all have some closure, but God, his parents didn’t need—

“Chris.” When I met her eyes again, she whispered, “He’s alive.”

“What?” My knees buckled. I grabbed the side of her minivan and leaned hard against it. “How the hell… He’s alive?”

She smiled, but that nervous tension remained in her expression. “It’s a long story. I’ve…I’ve been back in contact with him for a while. Almost a year now, off and on.”

I could barely breathe. “Why didn’t you tell me?”

“Because he didn’t want anyone to know.” She exhaled. “He knows people were hurt when he left.”

“Exactly that. He left.”

Left. I had a hard time trying to work out whether this was one of those horrible nice phrases, like “he passed away” or “he’s gone home to Jesus,” a pretty veneer for something awful, or whether she was really so blasé about it. Seeing the tension around her jaw, the second option looked a great deal unlikely. “Explain. Please?”

She tugged at my arm toward the café, and I got the hint and sighed.

We found a table—she’d selected a quiet corner—and then we went through the torturous process of ordering drinks while he left, he left echoed through my head.

When she leaned forward again, her eyes were all soft. “So, yes. Joshua left. That’s how he puts it.”

It was only really sinking in that he was alive. He could still do that. Use words. Give things names and descriptions. Something shifted in my chest, some kind of weight, or maybe grief, or maybe something else entirely. I wanted to strangle him, but this was only his sister, and she didn’t deserve that.

Deb went on. “Joshua reached out to me about a year ago. He found me on Facebook, of all places.” She leaned back when the waiter brought our coffees—decaf for her, of course—and ordered her superfood salad. I shook my head when the waiter asked me if I wanted anything. My stomach was too busy knotting and twisting.

She drew up her shoulders. “Well enough, I think. I asked him to come home to make his peace with Dad.”

Another one of those pretty words. Whether the old man wanted to be made peace with was an entirely different matter, but we both knew that. Deb always believed in family and forgiveness. I wasn’t so sure about all that. I had precious little experience with happy family reunions.

My stomach was busy enough to tolerate the sip of coffee. No way could I have eaten anything now. “All right.”

“He’s arriving this evening at Sea-Tac.” She lifted her eyebrows.

Oh no. I’m not picking him up with you. No way.

I started to shake my head, but she reached across the table and put a hand on my arm. “He wants to see you. He’s here to make peace with our father, but…you’re the one he’s been talking about recently.”

“And after five years of thinking he’s dead, I’m supposed to show up at the airport with flowers and a smile?” I pulled my arm back. “No. Just…no. I can’t.”

“It doesn’t have to be tonight. He’ll probably need to rest and settle in anyway. I’m sure he’ll be jetlagged, and…” She trailed off, then lowered her gaze and picked up her coffee.

“Jetlagged.” I tilted my head. “Where exactly is he coming from?”

Deb took a sip of coffee, rolling it around for a moment before she set it back down. “France.”

I blinked. “France? What in the…” I closed my eyes and shook my head. “Last I heard, he was missing and presumed dead. Now he’s alive and flying in from France?” I sat up. “What is going on?”

She took a deep breath. Folding her hands on the table, she met my eyes, her expression taut and stoic like it probably was whenever she had to explain something difficult to one of her children. “When he disappeared from his mission, it was because he left. He just…left. He wasn’t kidnapped or killed or anything like that. He left, he changed his name, and he joined the French Foreign Legion.”

I stared at her, waiting for the punch line. That was not the Joshua I knew. Not even close. He was the straight-A student, the track star, the football star, the everything-he-ever-did star. The first-chair trumpet player and promising business student who’d locked in a full-ride scholarship to Brigham Young, only to have his life tragically cut short during his two-year mission. People like that grew up to be CEOs. Or bishops. Or senators. They didn’t just up and walk away from everything to join the…

Deb nodded. “I didn’t believe it either, but then I could barely believe he was alive until I talked to him.”

The words thumped against my chest. “You’ve actually talked to him? Like, on the phone?”

So he was alive. His sister would have known if he was an imposter or a scam artist. If she’d spoken to him and still believed him, then he really was alive.

Laughing softly, she said, “He sounds a lot different now. I mean, it’s his voice. I knew it was him the moment I answered the phone.”

“Then how is he different?”

“He’s got an accent now. French, I guess. His English was actually a little rough.”

I struggled to imagine Mr. Class President, he of the eloquent speeches even in high school, having any difficulty with the English language. “But you’re sure it was him.”

Her laughter vanished, and she nodded slowly. “Absolutely. Chris, I wouldn’t lie to you. Not about this. Joshua is alive.”

Something shifted again in my chest. Like every damn organ I possessed. Maybe her relief or her love for her brother—some of that translated itself to me, though I didn’t want it to. I’d mourned him for so long that hearing he was alive was actually painful. But the whole story seemed unbelievable at the same time, exotic and strange and so not Joshua. I wanted to see him. And I never wanted to see him again. All this was half a dream and half careful what you wish for. Alive. And soon back home.