“I want to make something absolutely clear.” Toni turned the car into the motel’s two-lane driveway.

“I’m doing this because you asked me to.” She pulled into a space and shoved the gear shift into park. “But I think you’re being a fucking idiot.”

She was right and we both knew it, but we were here and I wasn’t turning back. No matter how much I needed to.

“Duly noted.” Swallowing hard, I faced her, meeting her hard-edged glare in the washed out light from the streetlights. “And I do appreciate it. You didn’t have to do this.”

Toni exhaled hard. Then her posture relaxed slightly, exasperation replacing irritation. “Are you sure about this, Travis?”

“I know you do, and I totally understand, but…” She chewed her lip and faced the rundown motel in the headlights. “You told me last time that it was the last time. And the time before that.”

“And the one before that,” I said quietly. “And I’d love to tell you that I’m absolutely certain this will be the last time.”

Toni sighed, the heavy release of breath echoing the resignation I felt. Then she unbuckled her seatbelt. “I’ll be right back.”

The driver’s side door opened. Slammed. I half-expected the solid thunk of high heels on pavement, but she’d worn tennis shoes tonight, which took the frustration out of her gait. I told myself that, anyway.

We used to argue every time she brought me to some backwoods motel like this. Around and around, all the reasons why I needed to and why I was an idiot for giving in. Then she’d remind me she thought it was a bad idea before she went into the office to check in.

The last couple of times, we hadn’t really argued. She probably knew by now there was no point. We’d both been duly convinced that I was an idiot.

I owed her big time for this. I was asking her to go way above and beyond anything I could have asked of one of my best friends in the entire world, and it wasn’t the first time. If I could have risked it without her help, I would have. I needed someone I could trust, though, and I trusted no one more than I did Toni. Somehow, some way, I would make this up to her. Again.

While I waited in the car, I scanned the parking lot. Surprise, surprise—it was deserted. Ten ’til midnight on a weekday frequently had that effect on public places, especially shithole motels with fading neon Vacancy signs and gravel parking areas.

Good. The fewer chances for recognition, the better.

Of course I’d taken precautions. Sometimes I could go places without being recognized, but I took no chances, especially since my face had been in the headlines recently. Just promo for my upcoming film, but enough to remind people I existed.

The car was a rental in Toni’s name. The brim of a Seattle Mariners baseball cap shaded my eyes and, if I kept my chin down, most of my face. The red North Face jacket belonged to Toni’s boyfriend, as did the cap, and he frequently wore both when he was out and about with us. Anyone saw me with her, they’d just assume I was Jason. Or at the very least, they wouldn’t think I was me.

The motel office’s front door swung open, and I looked up as Toni stepped out. My heart would have beat faster, but it had been pounding for the last few hours. Ever since I’d made the call and turned this batshit insane idea into a batshit insane plan. Again.

Toni slid into the driver’s seat and handed me a small envelope. “Your room is two twenty-eight.”

“Thanks.” I thumbed the card key inside the envelope.

She drove me around to the other side of the motel, and as the car idled beside the row of parking spaces—some occupied, most not—she looked at me again. “Call me when you want me to come back.”

“Will do.” I started to get out, but paused with my hand on the door handle and made myself look her in the eye. “Thank you again, Toni. I really do appreciate this.”

She forced a faint smile. “Any time. Just take care of yourself, okay?”

Travis has been in love with Mitch since their college days, but they’ve never been able to make it work. While Travis--now an A-list actor--is out, Mitch is not, and they’re both too high-profile to date in secret.

Instead, they make do with the occasional hot liaison in the middle of the night in shady, backwoods motels where no one will catch them. And every time they do, Travis promises himself he’s done being the skeleton in Mitch’s closet, and it really will be the last time.

Now tonight, he’s had enough. He loves Mitch, but he can’t keep putting himself through this. Just one more hot night together, and then he’s gone...unless Mitch can change his mind before Travis walks out the door forever... 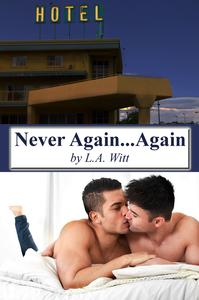