August Morrison and Ricardo Torralba would really like to live a quiet life—as quiet as life can be for a couple of eccentric hitmen, anyway. Unfortunately for them, they pushed their luck with the authors and demanded a second book. So now, whether they like it or not, they’re getting a third installment.

Yes, this is a revenge book. Because we’re the authors, that’s why.

This time, August and Ricardo are in way over their heads, because there are few things more dangerous than owing a favor to the mafia. When that favor gets called in, though, it’s not to kill anyone—it’s to save them. Time is running out to find the source of tainted street drugs poisoning innocent people.

Now they’re caught in the middle of a deadly war between rival families, all while trying to dodge suspicious police and merciless drug cartels.

Maybe this time, August and Ricardo will learn their lesson and not demand another book… assuming they survive this one.


Killer vs. Kingpin is book 3 in the Hitman vs. Hitman series that seems to have evolved from an alleged “standalone” to “yeah, we don’t even know.” They’re just too much fun to torture! Err, write. Too much fun to write. 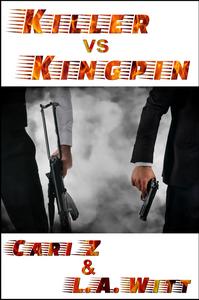