Between his time in the Marines and working as a bouncer at Wilde’s, Elliott Moore has seen it all. In his line of work, breaking up fights is business as usual. When he steps into a lovers’ quarrel one night, though, he finds himself running interference as a traumatized man tries to get rid of a persistent and occasionally violent ex-boyfriend.

Dr. Samir Ramezani has had enough. He just wants to move on from that toxic, abusive relationship, but his jerk of an ex isn’t ready to let him go. When Elliott offers to back him up, Samir is grateful for the help—and irresistibly drawn to the man with the big muscles and a soft touch.

Samir is terrified he’s just jumping from one bad relationship to another, but Elliott isn’t like men he’s dated before. He’s sweet, he’s gentle, and he’s a sucker for Samir’s beloved pets. And Elliott isn’t just protective of Samir—as the chemistry sizzles between them, he’s falling fast. It’s hard not to think this could be the real thing.

That is as long as the vindictive ex-boyfriend who knows all Samir’s weaknesses doesn’t find a way to sabotage it. 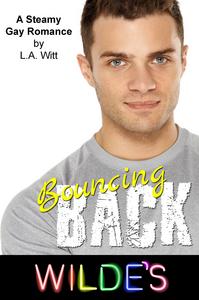