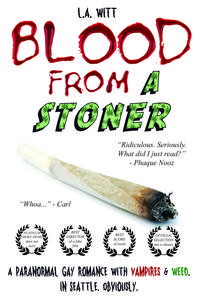 Greg Dawson’s not sure which he regrets more—becoming a vampire or becoming a software engineer. Immortality? Not all it’s cracked up to be. The job? Way more headache than it’s worth, especially on those increasingly frequent nights when he’s overworked and hangry. With a deadline looming and his hunger growing, he’s nearing the end of his tether. Then relief comes from an unexpected source—Zane Webber, the hot programmer Greg’s been fantasizing about for two years.

Disregarding company policy, Zane lets him feed, but kind of forgets to mention he’s got some weed in his system. The next thing Greg knows, he’s high as a kite… and he likes it. He wants more. Except how much of that high is secondhand weed, and how much is the electric and undeniable chemistry between him and Zane?

That chemistry draws them back to each other again and again, and suddenly their downtime is full of sex, smoke, feeding… and emotions. The only problem is that Zane’s a mortal. If they’re in this for the long haul, then Greg has to either turn Zane or accept a future of watching him wither and die. Greg doesn’t want to lose Zane, but he also can’t stomach condemning him to this “life.”

And if they can’t find some middle ground, they’ll have no choice but to let their love go up in smoke.