When Reggie’s garage became part of a popular reality show, business went through the roof. And he supposes having his shop in the black is a fair trade for jumping through the network’s hoops.

As the show’s lowest-ranking producer, Wes is tasked with proposing a new spin-off show to Reggie. The sexy mechanic makes him sweat on a normal day, but this time, Wes is holding cards he can’t show. With execs breathing down his neck, he’s expected to pitch a show Reggie will never agree to do, even if his rejection puts his existing show on the line.

The network is counting on Reggie refusing to sign. But they’re not counting on their messenger falling for the man they’re trying to fire.

This 19,000 word story was previously published. 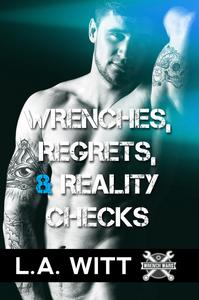 THE DOOR opened and Reggie was suddenly in the same room with Wes. Wes waited until the door was closed, cutting off the microphones and cameras in the main shop, before he made his approach.

“Reggie, hi.” He extended his hand. “Wes Morton from the network.”

“Yeah, I remember you.” Reggie eyed him but didn’t take the offered hand. He rubbed a shop towel over his own, and Wes couldn’t decide if the handshake refusal was intended to be snide or to keep from getting Wes’s hand greasy. He told himself it was the latter, but…. Yeah, right.

“Ray told me last week someone was coming to town.” Reggie’s eyebrow rose slightly. “Something about a spin-off series?”

Wes nodded. “Yeah.” He gestured at the briefcase he’d left propped up against the wall. “I brought along the contracts and infor—”

“Whoa, whoa.” Reggie put up his hands, flashing the tattoo on his left palm. “Let’s talk details before we bring contracts into it.”

Wes swallowed. They both knew damn well Reggie’s existing contract had him by the balls for this spin-off. Maybe “negotiating” would make him feel like he was in control, but he didn’t have much choice on this one, whether he liked it or not. The network was counting on that in ways Reggie couldn’t imagine.

“All right,” Wes said. “Is there a place we can talk privately?”

Pursing his lips, Reggie glanced over his shoulder toward the garage he’d just exited. “How long do you need?”

“We can keep it brief for now. I’ll be in town a few days if we need to discuss details more in-depth.”

Reggie eyed him, then nodded. “Let’s go in my office.”

Wes followed him into the office, and at Reggie’s invitation, took a seat in front of the desk.

It was strange how much this reminded him of being in an office with one of the higher-ups at the network. It couldn’t have been more different from their offices. Every piece of furniture in the network’s building was expensive, metal and glass with an art deco bent. Here, the furniture was old, mismatched, with the occasional grease smudge or faded sticker on the faux wood laminate. Reggie had probably bought that old computer the same year Wes had started with the network, while everyone Wes worked for had probably been through at least half a dozen machines since then. The walls—wood paneling on two sides, bare concrete on the others—were covered with photos of cars, some awards the shop had picked up over the years, and articles from the local newspaper instead of framed artwork, Ivy League MBAs, and a row of Emmy Awards.

But sitting in this slightly wobbly chair, facing Reggie over a cluttered desk, Reggie couldn’t help feeling like he was staring down one of his bosses.

Reggie tapped a broken pencil on the weathered blotter. “So, why does the network think there needs to be a spin-off?” He tilted the pencil toward the wall between the office and the garage where the rest of the crew was still filming. “We’re already running my entire shop into the ground with Wrench Wars.”

Wes cleared his throat. “Here’s the thing. Wrench Wars isn’t doing so hot as far as ratings are concerned.”

Reggie set his jaw and glared at him. “I’ve read the reports your boys have sent over. The ratings are down, but not by much.”

“Down is down.” Wes sounded more dismissive than he actually felt—he’d had this conversation with the execs in LA several times and knew it was pointless to try again. He cleared his throat. “Listen, the network’s considering… making some changes to the show.”

“Is that a diplomatic way of saying they’re thinking about axing my garage?”

Wes nodded. There was no need to specify that it was Reggie in particular they wanted to eighty-six.

Reggie exhaled. He didn’t seem all that surprised, but he wasn’t unaffected by the news either. “So, what’s the plan? Are they going to let us go?” He arched an eyebrow. “Per the contract, severance and all?”

Resisting the urge to fidget, Wes said, “Not exactly.”

“What does that mean? That contract specifically states that if we’re removed but the show continues, my guys get—”

“I know what it says,” Wes said quietly. “What they want is for you to do this spin-off, in the hopes that it’ll boost ratings for Wrench Wars. You’ve got a fan base, and we’d like to capitalize on that.” His stomach was queasy—did they really expect Reggie to buy this?

“So I have a fan base that’s enough to put me on a spin-off,” Reggie said, his tone flat, “but they still want to kick me off the show where my fan base expects to see me. I don’t get it.”

“With all due respect, you don’t have to.”

They both knew it. The clause about spin-offs was as ironclad as the one about severance pay for the garage crew. It didn’t matter why the network wanted him on a spin-off—if they did, he had to do it, or else he’d be in breach of contract.

Reggie looked at Wes but didn’t speak. Wes struggled not to shift under the mechanic’s scrutiny. He had to be absolutely on point and one hundred percent confident when he had meetings like this, and letting on that Reggie fucked up his blood pressure would be inexcusably unprofessional.

Finally, Reggie spoke. “Tell me about the spin-off.”

Wes cleared his throat. “You’re familiar with Anything to Marry Him, right?”

“I don’t watch it, but I’ve heard of it. It’s just like any of those other bachelor shows.” Reggie watched him silently again, brow pinched. Then, slowly, his eyebrows rose. His lips parted a little. “Are you… are you going to tell me they want me on Anything to Marry Him?”

If there was one thing Wes hated about this job, it was trying to sell this particular brand of reality show. As far as he was concerned, it was a slap in the face to marriage and relationships, and in this case, there was that extra sting of trying to sell it to a man he’d sell his own soul to hook up with.

Barely resisting the urge to sigh and tell Reggie how much he hated this, Wes nodded.

“No.” The mechanic put up both his hands. “Abso-fucking-lutely not.”

Wes sighed. “Think about it. You’ve been to the cons, right?”

Reggie pursed his lips and nodded.

“And how many girls do you see lining up to meet you and have a picture taken? They love you, Reg. The girls fucking adore you.”

Reggie’s eyebrow rose slowly. “So I should go on a bullshit TV show and make one of them think I’ll marry her?”

“It’s….” Wes sighed, struggling to find the words. Selling this to anyone else would’ve been easy, but not when he could barely string together a coherent sentence in front of the man to begin with. “It’s a fantasy that the network wants to capitalize on. Everyone knows deep down it’s all superficial, and no one really expects the relationship to last. But all the girls who adore you? They can watch it and think they’re seeing what it takes to win you over. What makes you fall in love. And even if they don’t realize it—”

“They think they could make me fall in love with them.”

Reggie stared at him. “You’ve got to be kidding me.”

“Look, it’s just for one season. Then after—”

“Seriously?” Reggie narrowed his eyes. “Are you really trying to sell me on this by saying it’s just for one season? You’re asking me to marry someone, man!”

Yeah, it did sound like a dick move and a shit deal. Wes couldn’t argue with that.

Reggie sighed and ran a hand through his hair, mussing it just enough to make Wes’s breath catch. “Listen. I need the show. My guys need the show.” He met Wes’s eyes. “But I can’t do the bachelor gig. It’s not an option.”

Wes tugged at his crisp white buttoned sleeve. “You are aware of the verbiage of your contract, right?”

“I am.” Leaning back, Reggie folded his tattooed arms across his chest. “Is the network really going to force me to do a bachelor show in order to keep Wrench Wars going?”

“I’m aware of what the contract says,” Reggie growled. “I’m not asking what it says. I’m asking if the network is really going to staple my balls to that clause for this kind of show.”

Wes took a deep breath. Reggie wanted it straight and to the point, and he was the kind of guy who could smell bullshit from a mile away. Hoping the defeat and self-loathing didn’t make it into his voice, he said, “They are exercising that clause, yes. If you don’t agree to the spin-off, your shop will be replaced on Wrench Wars next season.”

Reggie stared at him for a long moment, his eyes cold. Wes held his gaze, keeping his expression as neutral as possible.

Finally, Reggie broke the silence. “Get the fuck out of my office.”