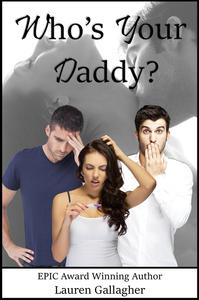 After her divorce, Carmen James is still trying to get back on her feet when fate pulls the rug out from under her. She’s pregnant—and she’s not sure who’s the father. Just one more thing for her impossible-to-please family to worry about. On the bright side, there are only two candidates: her best friend, Donovan, and Isaac. His boyfriend.

A little too much wine and the desire to comfort lead Donovan and Isaac to a night they both hope Carmen doesn’t regret. When she drops the bomb, though, Donovan’s plate, already crowded with a teenage son and a disapproving father, gets fuller. And Isaac, who’s still coming to terms with his bisexuality, wonders how he’ll handle fatherhood at forty.

Above all, both men worry that whatever the answer to the ultimate question—which of them got her pregnant—it will forever alter their longstanding friendship with Carmen. While they’re waiting for that answer, though, continuing their casual sexual relationship with her feels natural. But when emotions get involved, the cracks in their logic begin to drive Isaac, Don and Carmen apart just when they need each other the most.

This book contains three people in one hell of a pickle (anyone have any ice cream?), parents who suck at parenthood, parents-to-be who think they’ll suck at parenthood, a relationship-friendship-sexual-kind-of-thing that keeps getting more complicated, and a Chuck Norris joke.

These digital tests didn’t leave any room for denial. There was no “well, maybe that line isn’t really there”. No “is it really two lines?” No “I’m just seeing double, that’s all.” Not with this little bastard. In a half-inch-long window, in bold black print on a deceptively bland gray background, eight tiny letters offered no ambiguity or uncertainty.

Holding on to the bathroom counter for dear life and staring at that single word, I could have gone for some ambiguity or uncertainty. A few minutes, maybe even a few seconds, to let it sink in slowly. But no, ever the practical one, I’d gone for the brand with the clearest, least mistakable result, so there could be absolutely no doubt, and that was exactly what I’d gotten.

I closed my eyes and exhaled, pretending that single word wasn’t emblazoned across the insides of my eyelids. Taking long, deep breaths, I tried to keep the nausea at bay. I’d already been sick today. And yesterday. And every day this week and the better part of last week. So much for blaming my mom’s cooking, even if I had gone to my parents’ house for dinner a few times.

What I wasn’t so sure about was who the father was.

I groaned and rubbed my forehead with the heels of my hands. This wasn’t me. I didn’t do one-night stands. I didn’t have casual sex. Hell, I’d barely had any sex at all in the last few years, and in the six weeks and four days that I’d been officially divorced, I’d only done so once.

Several times, actually. In spite of myself, I shivered. For as much wine as the three of us had consumed, those two just didn’t quit.

Donovan and Isaac had been good friends of mine for ages. I knew Don long before he met Isaac five or six years ago, and the three of us were super close. Of course, my ex-husband hated that. It was tough to say what bothered him more: the fact that I was so close to two other men, or the fact that they were gay. Why I ever thought to marry a man who was so homophobic, I didn’t know. But then, I couldn’t really remember why I’d thought to marry him at all, and divorcing him had been one of the most liberating moves I’d ever made.

The night my divorce was final, I’d gone to Don and Isaac’s to spend the evening celebrating. The amputation of the gangrenous husband growth, as Don called it, was complete, and I was free to move on.

And what was a celebration without wine?

One bottle had loosened our tongues enough to get us talking about more intimate subjects than usual. Two had coaxed Isaac into admitting to some bi-curiosity and a desire to indulge that bi-curiosity before he turned forty next month. Three had been enough for all of us to admit a very strong and very mutual three-way attraction. Somewhere before we got to the bottom of the fourth bottle, my shirt had come off, and the rest was a patchwork of sometimes blurred, sometimes clear moments of amazing sex.

Not that it took a genius to figure out how it had happened. Whether it was the alcohol, or just the fact that none of us had had any reason to use them in the last several years, we’d completely neglected to use condoms. I hadn’t had sex with anyone since, and it had been months before that.

No two ways about it. Either Isaac or Don was the father of this baby.

“Shit,” I breathed into the otherwise silent bathroom.

I’d just started getting on my feet. It had taken me almost two years to save enough money to leave my husband. Divorces were expensive—but oh, so worth it—and my bank account was still in the intensive care unit. As it was, I was living with my sister in a cramped two-bedroom apartment that wasn’t even big enough for the two of us. I’d moved in with her until I could get on my feet.

And since when was I the type to be reckless with sex or a dear friendship? This wasn’t me. I didn’t do this.

I opened my eyes. Maybe I could tell myself this wasn’t me, but that plastic stick with its verdict on the screen begged to differ.

A lump rose in my throat, and I forced it back. That had been happening a lot the last week or two. One of many reasons I’d bought that damning little test. The last thing I was going to do now was succumb to hormones and fall apart. That wouldn’t solve anything.

Solve anything. Right. Because this was a situation that could be resolved, tied up in a neat, tidy little bow and shelved in the past with a promise not to be so stupid in the future. My friendship and their relationship would make it through without a scratch, everything would settle down and be the same as it always was.

Why did the first decent sexual experience I’d had in years have to turn out like this? And “decent” didn’t begin to describe it. Good God. If there were no strings, no baby, no worries, I’d have slept with them again in a heartbeat. They were amazing. Don was deliciously rough, one of those men who understood that “pull my hair” didn’t mean “just give it a little tug”. He knew it meant “fucking pull it and make it hurt”. Isaac, on the other hand, was gentle, almost tender. Some of that may have been timidity because of inexperience. If I remembered our semi-drunk conversation beforehand, he’d never been with a woman before that night.

“You wouldn’t know it,” I whispered to my reflection, shivering at the memory of his touch. Sex with them was like sex with fire and water. One hot, one cool. One gentle, one violent. Completely different, completely complementary, and easily the most intense sexual experience I’d ever had.

The most disastrous too, apparently. I closed my eyes and swore again.

Okay. Okay. Get it together. Stop bitching to the bathroom mirror and…and…do…something.