TITLE: What He Left Behind
COVER ARTIST: Lori Witt

Michael isn’t looking at me when he says it. He’s across the dimly lit booth, staring down at the piece of bread he’s been absently shredding for the last few minutes. Brow taut, shoulders hunched, he hasn’t said much since he showed up for lunch, and I knew something had to be wrong. I just wasn’t expecting…that.

The long, resigned release of breath confirms it. Michael sets the bread down, brushes a few crumbs off his fingers and sits back against the fake leather cushion. “I said no.”

My heart sinks. He’s had the most adorable crush on that doctor for months, and ever since he found out the guy was gay, he’s been trying to work up the courage to ask him out. From the sound of it, the doctor—a vet who spends one or two days a week in the clinic where Michael works—has reciprocated pretty hard, and they started flirting cautiously a few weeks ago. I can’t blame either of them. The doc is one of those smoking-hot rugged guys with a little gray around the edges, and Michael… Well, Michael is gorgeous. Even my husband ogles him, though he admittedly does have a thing for redheads, and we both get a little breathless at the sight of a man in scrubs.

But Dr. Klein asked, and Michael said no, and I don’t know what to say. I didn’t know what to say the last couple of times this scenario played out. It happened with another vet tech who worked in the same office last year—they flirted, they danced around the obvious, and when the guy had finally suggested a drink after work, Michael balked. He never has given me a straight answer about that one. Or about the FedEx driver he’d played the same game with for the better part of a year before the vet tech came along.

Except I have my suspicions, and I hope like hell that this time and those other two times were just cold feet, not a throwback to Michael’s awful past.

But what the hell do I say?

Come on, Josh. Say something, for f*ck’s sake.

Treading carefully, I ask, “What changed your mind about him?”

Michael leans forward again, pressing his elbow onto the table and kneading the bridge of his nose with two fingers. “God, I’m so stupid.”

With anyone else, I’d have thought—and quite possibly said—that yes, dude, you are stupid. Dr. Klein is one of those guys who can turn every head in a room that’s already packed full of hot men. Plus he’s a vet who’s notorious for being extra gentle and kind with animals, and if there’s a better way to Michael’s heart, I don’t know what it is.

I fold my arms on the edge of the table and try to narrow some of the distance between us. It’s a struggle not to reach past the abandoned bread basket and put a reassuring hand on his arm. Even after all these years, it’s hard to remember that Michael doesn’t like being touched. That’s one of the biggest tragedies of his past—he’d always been touchy-feely in an endearing kind of way, and it still hurts to see him recoil from even the slightest brush of human contact.

“You’re not stupid. What happened?”

“Nothing. Nothing happened.” He drops his hand again, and he meets my eyes. “I just couldn’t do it.”

I swallow. “Have you talked to Dr. Hamilton about it?”

Michael flinches and drops his gaze. The bread is back in his line of sight again, and when he starts ripping crumbs off it once more, his hands are unsteady. Were they earlier? I can’t remember now and wish I’d paid attention.

“I left her a message,” he whispers. “I doubt she’ll be surprised.”

My hackles go up at the sound of that asshole’s name. “Yeah.”

“Isn’t everything about him these days?” Michael’s voice is bitter, and as if for emphasis, he tears off a chunk of crust and tosses it into the basket. Then he shakes his head and sits back again, dusting more crumbs off his fingers. “Every time I think I’m past all that…”

“Neither was Steve when we first started dating,” he mutters.

The booth is silent for a moment. I still don’t know what to say, and Michael’s lost in his own thoughts.

Right then, the ponytailed blonde waitress appears with our food and asks with a huge grin, “Okay, who had the veggie stir fry?”

Michael musters something in the neighborhood of a smile. “Me.”

She sets the plate down in front of him and turns to me. “So this pesto chicken must be for you.”

I nod, but as she lays it on the table, my stomach twists. I could’ve sworn I was starving when I got here. “Thanks.”

“Can I get either of you anything else?”

Michael and I exchange glances, and I shake my head. To the waitress, he says, “No, we’re fine. Thank you.” Another smile, this time a bit more pronounced, not to mention forced.

With that, she’s gone, and we’re alone with two plates of food. Michael eyes his. I poke at mine with a fork. Well. So much for that idea. There are days when I can joke with Michael that we should start a new weight loss program. All someone has to do is say Steve’s name at the table, and everyone will lose their appetites.

“I said ‘Steve’ at every other meal, and lost twenty pounds in two weeks!”

Some days, Michael thinks that’s funny in a twisted sort of way. Today, I’m pretty sure his sense of humor has gone in the same direction as his appetite, and I don’t blame him one bit. Not if that asshole is still interfering with his life after all this time. It’s been five goddamned years since the night I picked him up at the emergency room for the last time, when he said he was really leaving this time and he’d actually stuck to it, and I swear there are days when Steve has a tighter hold on him now than he did back then.

The silence wears on. Michael manages to take a few bites of his pasta, so I make myself eat a bit too. We both have to go back to work after all, and if I know Michael, he’s been sucking down coffee and nothing else since his alarm went off. Just like me.

Michael lays his fork down and sits a bit straighter. My mouth goes dry. I quickly take a drink to wash down the pesto chicken before he speaks. At least I know him well enough that I can tell from a mile away if he’s about to say something important, and he knows me well enough to wait until I won’t aspirate my iced tea.

Once I’m safe from drowning, he finally asks, “You want to know what keeps stopping me from going out with anyone?”

I’m scared to death this will be as hard to hear as the myriad confessions he’s made in the years since Steve, especially if it’s taken this long for him and his therapist to pry it out of his psyche, and my stomach churns as I nod.

Michael drops his gaze and stares at his food for a moment. He takes a deep breath, and I hold mine.

“Dr. Hamilton’s helped me through a lot of the bullshit,” he says. “I can separate everything Steve did from what a real relationship should be. I’ve sorted most of it out, and I’ve let enough of it go that I think I can actually be part of a functional, healthy relationship again.”

He pauses, and I gnaw my lip. The unspoken “But…” hangs in the air. It’s making my hands twitchy, so I slide my wedding ring back and forth over my knuckle to keep them occupied.

“I think I’m okay for almost everything about a normal relationship.” He meets my eyes, and the faintest shine in his sends my heart into my feet. His voice barely carries across the booth as he says, “Except I am completely f*cking terrified to have sex.” 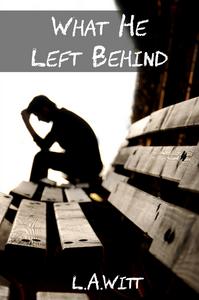 Josh Carver would do anything for Michael Adair, his childhood best friend. In the five years since Michael finally left his abusive ex-partner, Josh and his husband Ian have helped him leave that horrific past behind him. Michael seems to have adjusted well enough…until he admits he’s afraid to date because the abuse has left him terrified of physical intimacy.

Josh is stunned again when Ian proposes a solution—Josh can help Michael learn to enjoy sex again. It isn’t like it would be the first time. After all, Josh and Michael lost their virginity to each other years ago.

Michael hesitates, but then takes him up on the idea. It isn’t long before Ian’s getting involved too… and it’s all fine and dandy until emotions come into play that threaten their friendship, as well as Josh and Ian’s marriage.

Contains three guys who will do anything for each other, a hot tub that’s always the right temperature, and a cat with an attitude problem.

This 73,000 word novel was previously published.