“Somebody looks stressed.” Haley grimaced sympathetically as she watched me drop into the last empty seat at the four-person booth. “What’s wrong?”

“Just got off the phone with my mom.” I groaned. “If one of you wants to stick some poison in my food, go for it.”

Casey cocked their head. “Since when do you and your mom not get along?”

“No, no, we get along. And we didn’t fight or—” I sighed, and realized how pathetic I sounded. Clearing my throat, I sat up a bit. “The thing is, weddings are a big deal in my family. Like, a big deal.”

Casey and Haley both frowned and went for their drinks. They both had some pretty strong opinions about the obsession with weddings, and I didn’t totally disagree with them. Personally, I loved the sentiment and the romance but, like my friends, wrinkled my nose at the thought of pouring thousands of dollars into a party.

Dom poked at some ice cubes with his straw. “So, I’m assuming your mom was calling to tell you someone’s getting married?”

“Yep. And not just someone—three someones.” I didn’t even care if I sounded pathetic now. “I’m invited to three stupid weddings this summer.”

Casey made a gagging noise. Haley snickered, though she looked almost apologetic.

Dom shook his head and chuckled. “Man. That sucks.”

“I wish. And…” I sat back and exhaled. “Honestly, I don’t even mind going. Especially to my sister’s. It’s just…” I chewed my lip for a moment. “I’m just so not ready to deal with three weddings in a row full of people trying to hook me up with their sons, nephews, cousins, dry cleaners, and gardeners-in-law. My mom has already mentioned, like, six guys who are coming, and hey, it’s a wedding and romance is in the air!”

My friends all rolled their eyes.

I thumbed the edge of the menu I hadn’t even opened yet. “I’m just… I’m so not ready for that, you know? Max hasn’t even been gone two months, and I’m…” My shoulders sagged, and I had to fight back the sudden lump in my throat.

Dom put a gentle hand in the middle of my back. “I don’t think anyone expects you to be ready for that.”

“No one except my entire family. And I mean, I feel like a dick complaining about it. I could do a lot worse than have a family who waves the rainbow flag a little too enthusiastically sometimes.”

“Yeah, probably.” Casey shrugged. “But it’s not like you come in here and act like nobody’s problems could ever top that, so…” They made a dismissive gesture. “And anyway, I don’t blame you for wanting some time to get over Max. That was rough on you.”

More to myself than anyone else, I murmured, “It was.”

Dom’s hand moved up to the back of my neck and gave a gentle squeeze. I closed my eyes and sighed, fighting the urge to just lean into him and let him hug me until I didn’t care about Max or dumb weddings anymore. Dom was good at things like that. Always had been.

“Maybe just talk to your mom?” Haley suggested. “You don’t think she’d understand that you need some time after Max?”

I laughed dryly and met her gaze across the table. “My mom is convinced the best way to get over a guy is to start looking for another one.”

Haley and Casey exchanged puzzled looks. They were both aromantic, and while they understood relationships on an intellectual level, neither could wrap their heads around the utter obsession with needing to have a partner. Being with someone made sense, but the way people flailed and panicked over being single as if they were missing a vital organ was alien to them. As much as I loved being in love with someone, I was starting to think my friends were onto something.

“Any way you can bail on the weddings?” Casey asked. “Or at least not go to all of them?”

“Not really. And I mean I actually do like weddings, and I want to see my sister and my cousins getting married.” I rubbed the bridge of my nose. “I’m just not looking forward to the let me introduce you to him-go-round.”

“Maybe you should take a date,” Haley said. “Tell your mom they’re your partner, and just enjoy the weddings without all the pressure.”

“You’ll have to deal with all this again after you”—she made air quotes—“break up, but at least it’ll buy you some time to finish getting over Max.”

Dom’s fingertips twitched almost imperceptibly on my back, and he cleared his throat. “If you want, I can go with you.”

I turned to him, eyes wide. “Really?”

“Why not?” He slid his hand up to my shoulder and gave it a reassuring squeeze. “Your mom’s always telling you we’d make a cute couple, right?”

Oh God, wasn’t she ever?

“True. But you really wouldn’t mind?”

“See? Exactly!” He grinned broadly. “So I get free wedding cake—”

Dom nodded. “I get free wedding cake and free booze, and you avoid all the matchmakers. It’s perfect.”

“Huh. Well damn. Yeah.” I smiled and leaned against him, and as he wrapped his arm around me, I sighed with a lot less frustration than I had a minute ago. “Why am I not surprised that this group solved my problem?”

“Pfft.” Casey picked up their drink. “If it weren’t for us, none of your problems would ever be solved.”

“Hey!” I tried to kick them under the table but missed, and they laughed.

“You know they’re right,” Dom said, chuckling. I aimed a playful glare at him, but his smile shut me down. “Come on, it’s not like it’s just you. We all solve each other’s crap.”

“Okay, that’s fair.” I laughed, sitting up so I wasn’t leaning on Dom anymore. I would have loved to stay like that all through dinner, but two dudes cuddling in public didn’t always fly. That, and it was kind of tough to eat like that, and now that I had a plan for surviving those weddings, my appetite was slowly coming back to life. As much as it ever did these days, anyway; I’d take what I could get in that department.Feeling a hell of a lot more optimistic about things, I opened my menu and started looking for something to eat.

On the heels of a painful and long overdue breakup, what Victor Nelson needs is time to lick his wounds. What he doesn’t need is everyone in his family trying to play matchmaker so he can find someone new… which is exactly what they’ll do at the three stupid weddings he has to attend this summer.

Fortunately, it’s Dominic Lowe to the rescue. Dom is more than willing to come along to all the weddings as his best friend’s “boyfriend”… even if he’d much rather be there as Vic’s real boyfriend.

Convincing people they’re a couple is easy. The charade is miserable for Dom, though, after years of being madly in love with Vic. But maybe those three weddings are a rehearsal for the relationship he knows they could have for real. 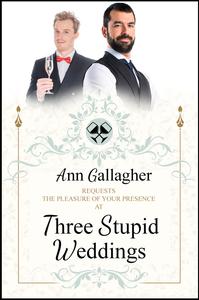