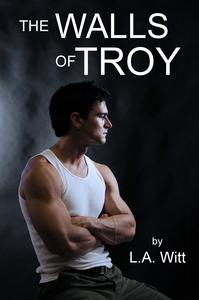 MA1 Iskander Ayhan’s orders are simple: stay with Admiral Dalton’s son as his plainclothes bodyguard while he attends university classes. So typical—a high-ranking officer abusing Navy resources for unnecessary security as a status symbol. But it doesn’t take long before Iskander realizes he’s not really there to protect the kid from benign harassment by homophobic classmates.

Behind the piercings, eyeliner, and bad attitude, Troy Dalton is hiding something. He’s scared, and although he’s not so sure the armed bodyguard by his side is enough to keep him safe, he can’t risk revealing the truth.

Slowly, Iskander gains Troy’s trust, and the walls start coming down, but before they know it, the two men are way too close to each other… and suddenly Iskander is attracting more danger to the man he’s sworn to protect.

Now he doesn’t know how to keep Troy safe from harm—by staying close to him, or getting as far away from him as possible.

This 74,000 word novel was previously published.

TITLE: The Walls of Troy

Once again, I found myself sitting in front of a desk, this time with Max beside me rather than across, and the admiral sank into the large leather chair opposite us.

“So, as MA1 Fowler has probably explained,” he said, folding his hands on the desk, “my son is attending Virginia Southern University. He’s been…receiving some harassment.”

“Good. I would’ve liked to send Troy to a better, safer university, but…” The admiral shifted a little, and didn’t quite maintain eye contact. “Sadly, it would seem this attitude is permeating even some of the more ‘progressive’ universities.”

I pursed my lips. Not that I’d spent a lot of time on university campuses recently, but that didn’t sound quite right. “Have there been threats specifically against your son? Or just gay students in general?”

“Troy’s received some threatening notes,” Max said. “Left on the windshield of his car, as I mentioned earlier. We don’t know for sure if other students have received them.”

“Has anyone looked into that?” I asked. “If this is a more widespread—”

“The university is investigating that,” the admiral said tersely. “My concern is about my son, and I want someone with him at all times. Even when he’s attending classes.”

Max turned to me. “That said, we’re concerned having a uniformed, armed guard with him will just draw more attention. And possibly escalate the situation, which is why you’ll be in plainclothes and operating as discreetly as possible.”

Dalton shifted in his chair. “For that matter, my son refused to agree to any kind of protective detail unless they were plainclothes.”

I arched an eyebrow, biting back a few statements that began with with all due respect, sir… No sense getting off on the wrong foot with the man. I also resisted the urge to give Max the side-eye for changing his tune—of course he had to appear to take everything seriously, especially in front of the man himself, but I was leery of people who could shift gears like that without batting an eyelash. That was the type of persona that could be a kiss-ass or a sociopath, and sometimes it was hard to tell the difference.

Admiral Dalton went on. “The university is aware of the situation. You will carry a concealed weapon, but otherwise, you’ll be a student just like everyone else. You’re only on duty when Troy leaves home, be it for school or anything else. Otherwise, we have ample security”—he gestured at Max—“here at the house.”

I nodded. The university knew? And had authorized me to show up on campus with a weapon? For being harassed? How much clout did this guy have?

“So.” Dalton folded his hands. “Do you have any questions?”

I cleared my throat. “What about college credit for my classes? I’m assuming part of being discreet means I have to study and do the work, so…”

The admiral chuckled. “Fair point, MA1. I’ll make some phone calls and make sure you get proper credit.”

Wow. He did have some clout, didn’t he?

“I’m sending my son to class with a fully-armed bodyguard. Oh, and you’re going to give the guard college credit too.”

Dalton looked at his watch. “Troy should be home by now.”

“He is,” Fowler said. “Came home about twenty minutes before MA1 Ayhan got here.”

“Oh. Good.” He stood again. “I suppose I should introduce the two of you before I send you off to class together.”

My informal tour of the house continued as we left Dalton’s office and headed up the massive staircase. Obviously this house had been designed by someone who liked to make a grand entrance—it was one of those sets of stairs that went straight up, then split to the left and right. Like something straight out of Gone with the Wind.

We took a left and followed a short hallway. Dalton stopped at the second door on the right and tapped lightly. “Troy?”

There was movement on the other side, and then the door opened.

And a fourth Rottweiler appeared.

My heart jumped into my throat. So that would be the one Max had referred to as “the big one”. Holy shit.

The dog stayed in the doorway, watching me curiously and sniffing the air, but didn’t come any closer. Christ. That was the biggest Rottweiler I’d ever seen in my life, and my brain picked that exact moment to remind me of the time my dad had told me dogs could smell fear.

A moment later, I realized the dog wasn’t the only one in the doorway—it stood beside a kid who must’ve been Troy Dalton.

I swallowed. I could almost forgive the fact that no one had warned me about the dogs. The least they could have done, though, was given me a heads-up that Admiral Dalton’s son was fucking hot.

Or, well, he should’ve been. That bone structure—all perfectly proportioned angles, cheekbones that could etch glass—made my pulse jump. The low-slung jeans emphasized a gorgeous set of narrow hips, and I couldn’t help noticing he was lean with beautifully toned arms. It wouldn’t have surprised me if he had a set of washboard abs underneath that loose, faded T-shirt. It was hard to tell, though, especially with the I-don’t-give-a-fuck slouch, which managed to make his shoulders look unattractive at the same time it torqued his hips just right to have the opposite effect.

His expression was full of attitude, from the nearly there smirk to the piercings. He had two rings and a stud in his left eyebrow, plus a couple of earrings in one ear and several in the other, including three in the cartilage up on top. I couldn’t begin to guess his natural hair color, but I was pretty sure that ink-black-almost-blue wasn’t it.

The way he looked me up and down—half-bored, half-annoyed—sealed the emo, borderline-goth look. My God, punks like that annoyed the ever-loving fuck out of me.

The admiral gestured at me. “Troy, I want you to meet your new bodyguard. This is…” Dalton glanced at me. “How do you say your first name again?”

“Iskander.” I extended my hand to Troy.

The kid drew back a little, eyeing me the way I’d eyed the three monstrous dogs. To his father, he said, “I thought we agreed he’d be plainclothes. I don’t want a fucking cop walking around with me.”

Dalton patted the air. “He’s in uniform to report for duty. He’ll be plainclothes when he accompanies you.”

Troy’s triple-pierced eyebrow arched. “And totally civilian, right? Nothing that even says ‘Navy’ on it?”

I glanced at Max, who nodded once. “Sure. Yeah. I have some T-shirts I’ve picked up in various ports, but—”

“Good. Wear those.” Troy relaxed slightly, and I realized that even as he’d slouched, his shoulders had been so tense, they were probably cable tight. What the hell?

He finally shook my hand. “Iskander, you said?”

As he withdrew his hand, that nearly there smirk came completely to life. “Guess I should’ve known you were just here to check in, or Dad would’ve skinned you alive for the haircut by now.”

My heart clenched—even though I’d been ordered to go incognito, I instinctively cringed at the idea of a powerful officer’s attention being drawn to my non-regulation haircut while I was in uniform.

But Admiral Dalton just chuckled. “Well, he’ll be in plainclothes tomorrow. What time is your first class, Troy?”

“Nine thirty.” Troy’s eyes flicked toward me. “Are we driving in together, or do you meet me there?”

“I’ll report in here, and we’ll drive in together.”

Something in his posture relaxed even more. As if he’d been afraid of…something? Whatever it was, the relief was evident, and a fierce sense of protectiveness suddenly tightened in my chest, which baffled me as much as how he was able to be so tense even while he was in a look-how-few-fucks-I-give stance.

He took a half step back. “Okay, well, I’ll see you tomorrow.”

I nodded. “Bright and early.”

He cracked the closest thing he was probably capable of to a smile. “Okay.” He glanced down at the dog—holy shit, the dog’s been here this whole time?—and snapped his fingers. “Talos, come on.”

The dog trotted back into the bedroom.

He gave a slight nod and then followed the dog into the room. When the door clicked shut behind him, I released a breath I hadn’t realized I’d been holding. What the hell?

“Come on back down to the security office,” Max said. “We’ll finish with your check-in down there.”

“Right. Okay.” I extended my hand to Admiral Dalton. “Good to meet you again, sir. I’m looking forward to working for you.”

He shook my hand firmly. “Welcome aboard, MA1.”