Where do you go when there’s nowhere left to go?

Levi, Darius, and Ian have been on the run from Levi’s wolf clan, but now they’ve got a problem. Levi’s now part vampire. Darius, a vampire for the last half century, is now part wolf. They have to feed on blood, but a bite will turn a human to a wolf.

They’re left with only one option: find a group of wolves to live amongst… which is a challenge when the wolves want them dead.

On a remote island off the coast of Alaska, though, they find a small community willing to let them stay, at least for the time being. The decision isn’t unanimous, though, and the community is divided. Some are willing to let the fugitives stay and feed off their people. Others, though, want the three men dead, even if it means destroying their own village in the process.

And when one of the clan Elders learns that the island wolves are harboring them, he’s going to make sure Levi, Darius, and Ian are dead if he has to do it himself. 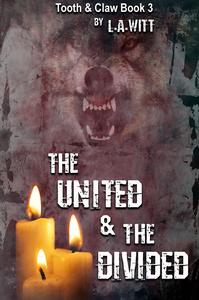 TITLE: The United & The Divided

“Ian.” Someone nudged my shoulder. Darius, my brain figured out after a moment. “Hey, you awake?”

I burrowed my face into the pillow. “Do I have to be?”

And with that, I was awake. Apprehension burrowed under my skin and dug itself in.

Sitting up slowly, I rubbed my stiff neck. The muscle would loosen itself soon enough, and if I’d actually slept on it badly enough to do some damage, it would be healed within the hour. This vampire deal wasn’t all that bad sometimes.

Darius’s dark hair was disheveled, so he must not have been awake long himself. He rested a hand above the bunk and swayed a little, adapting to the slow rocking of the boat. That constant motion had alternately nauseated me and put me to sleep since we’d left Levi’s grandmother’s house in Sitka. Now that we’d arrived at our destination, a tiny island off the coast of Alaska near Kodiak Island, it wasn’t the rocking that made me queasy.

I took a deep breath. I was so not ready for this. An island full of wolves belonging to the same clan that had been trying to kill us did not feel like safe harbor to me.

“Relax.” Darius touched my shoulder. “We’ll be all right.”

“I’ll believe that when I see it,” I muttered, running a hand through my hair in a half-assed attempt to straighten it.

He scowled but didn’t say anything. As much as he tried to reassure me, I was pretty certain he wasn’t any more thrilled about this arrangement than I was. He kept a calm demeanor and a relaxed front, but his slightly elevated heart rate gave him away.

A pair of booted feet came down the ladder behind him. Darius turned around and, a second later, Levi dropped into full view. He looked better than he had recently. He was more put together than Darius, his near-black hair perfectly arranged except for a few strands the wind had blown into his face. Still, he was obviously exhausted. He hadn’t been a vampire long enough to be quite as pale as Darius or myself, but what lack of sunlight hadn’t yet done, pure exhaustion certainly had. The life of a fugitive wasn’t an easy one, as we’d learned all too well recently.

Levi sank onto the bunk beside me. “Grandma’s going ashore to talk to the Elders. They already know we’re coming, but she wants to make sure everything is clear with this arrangement.”

Levi shook his head. “No idea. I know this isn’t going over well with the pack, though. And even if the pack on the island is okay with it, the clan is going to be pissed.”

“Are we sure there’s nowhere else to go?” I asked. “This just doesn’t seem safe.”

Darius shook his head, sighing heavily. “Remember? Levi and I can’t feed off humans. Only wolves.”

I groaned. That issue was going to be the death of all three of us. Levi and Darius were both wolves now, and both vampires; a bite to feed the vampire would convert a human into a wolf. Without willing wolves, we were fucked.

“So what happens if the shit hits the fan?” I asked. “Or if no one allows us to feed? This is an island. And there’s only a few hours of daylight at a time right now, but it doesn’t take much, you know?”

Levi sighed, shaking his head again. “I don’t know. I really don’t.” His shoulders sagged, and when he reached up to brush a few strands of dark hair out of his face, that simple movement seemed to take all the energy he had.

I wrapped my arms around him and let him lean against me. Watching Levi like this was hell. He’d always been the stronger of the two of us, but now he was so beaten down, demoralized, on the verge of total defeat. As much as he’d tried to stay strong, he was cracking under the weight of everything that had happened recently. His entire world had crumbled beneath him in a matter of weeks, and he was starting to crumble right along with it.

“We’ll be okay,” I whispered and kissed his cheek, wondering if he believed me any more than I’d believed Darius.

The boat listed a little to the left, and then heavy footsteps thunked on the deck above us. All three of us looked up, silently tracking the steps as they approached the ladder. Then a pair of faded baby-blue arctic boots appeared, and I released my breath.

“Well,” Grandma said as she came fully into view. “They’re not happy, but the Elders are explaining the situation to the rest of the pack in the morning.”

“What do we do until then?” Levi asked. “Just…stay here?”

She nodded and stepped off the ladder. “I’m not taking you into that village until every wolf in the pack knows they’re not to lay a hand on any of you.” Her expression hardened. “There’s plenty left in that shotgun for anyone who objects.” For a woman who’d originally turned us over to the wolves before deciding at the last second to save our asses, she was certainly protective of us now.

The three of us exchanged uncertain glances.

“Relax, boys.” Grandma patted the air with both hands. “The Elders and I will keep the pack in line. You three keep your heads low and don’t make any waves.” Her gaze landed on Levi, and she arched an eyebrow. “Am I clear?”

All three of us nodded. Even Levi.

“All right.” She patted Levi’s shoulder before heading back toward the ladder. “It’s just about dawn right now, so you boys hang tight for a little while. I’ll be back when the sun’s down.”

“Well.” Darius exhaled hard and ran a hand through his hair. “I guess now we wait.”

I chewed my lip, then looked at Levi. “As long as we’re just sitting here, there’s something that’s been bugging me the last few days.”

“Only one thing?” Levi smirked. “Lucky you.”

He squeezed my leg. “Sorry. What’s on your mind?”

“When we got cornered up at your grandmother’s house, and one of the wolves had me pinned down, why did you and Darius surrender? Why didn’t you just tell him that biting me would kill him too?”

The brief flicker of humor in Levi’s expression was long gone, and he slid his hand over my leg, a gesture that was as affectionate as it was protective. “Because the wolves had the upper hand, and reminding them that vampirism is contagious would have just gotten us all killed. Starting with you.”

“Not that biting me would have done him any good.”

“Shooting you—or me or Darius—through the heart would have.”

He slid his hand up and down my leg. “I thought about it. Believe me, I did. Whatever I had to do to save you, I was willing, but that?” He shook his head. “I couldn’t take the risk.”

“We got out,” Darius said. “All three of us. That’s all that matters.”

“Agreed.” I put my hand on top of Levi’s. “I was just curious. Not making any accusations.”

And though no one said it, I had no doubt we were all thinking it.

We’d made it out alive, but how long would that last?