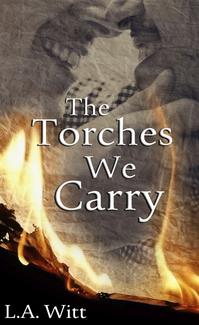 TITLE: The Torches We Carry

It’s been six years since Marcus Peterson and Reuben Kelly broke up, but they’ve made it work as friends and coworkers. That is until a few too many drinks at the company Christmas party leads to a night they both regret.

Eight awkward weeks later, when their boss—Reuben’s dad—needs someone to fill in at a trade show, Marcus and Reuben find themselves in close confines. A road trip, a booth, a hotel room… and that’s before the weather goes south.

There’s no escape from each other, and there’s no ignoring the guilt, the awkwardness… and the spark that desperately wants to come back to life. Because if there’s one thing that hasn’t changed after all this time, it’s how they feel about each other.

But if they can’t cut through all the barriers keeping them apart, this old flame will go out for good.


“Could you swing by my office as soon as you have a minute?”

I squeezed my eyes shut and fought the urge to snap my desk phone in half. I didn’t have a minute and wouldn’t for a while, but when Dad summoned me to his office, it meant now so I forced the frustration out of my voice. “Yeah. I’ll be right there.”

He hung up without further comment. I sighed heavily and put the phone back on the cradle. With a knot in the pit of my stomach, I surveyed the paperwork spread out across my desk. I shot a plaintive look at my email browser, hoping the number next to New Messages hadn’t increased in the fourteen seconds I’d been on the phone with my father. It had. Of course it had. By the time I came back from Dad’s office, the pile would be higher and that number would be bigger. So much for not coming in this weekend.

And everyone wonders why I went gray so young.

Okay, so that was mostly genetics, but I suspected my dad had contributed more than just DNA to me being completely gray at thirty-five.

My phone started ringing because of course it did. According to the caller ID, it was Jan Harper, one of my engineers. I suspected it was about a set of schematics that we desperately needed to finalize by the end of the month, but I let her go to voicemail because the only thing more urgent than that project was whatever Dad wanted.

I got up and walked away from my desk, my phone still ringing behind me, and headed down the hall to Dad’s office.

I returned the smile. “Thanks.” Then I continued past her, gave his door a cursory knock, and went inside.

“Have a seat.” Dad’s voice was terse as always, and he didn’t look away from whatever he was typing.

I took my usual chair and waited while he finished his—I assumed—email.

When he’d finished a moment later, he faced me, folding his hands behind his keyboard. “Is there something I need to know about between you and Marcus?”

“Because you’ve seemed a little, I don’t know, uncomfortable around each other lately.”

If I hadn’t been so startled by this line of conversation, I might have laughed. Uncomfortable around each other? A little uncomfortable? Right. That was a hilarious understatement. Or at least it would have been if I hadn’t been filled with so much horror that my father had noticed the tension between me and the company’s marketing manager. He was usually oblivious to things like that. Oblivious enough that my year-long relationship with Marcus had slipped completely under his radar. As had our breakup almost six years ago.

Then again, Marcus and I hadn’t had to work together on a near-daily basis back then. And our split had been amicable, complete with a long conversation about making sure things didn’t get weird at the office. These days, we were constantly in each other’s space, and thanks to a certain incident at the company Christmas party two months ago, things were… well, weird didn’t begin to describe it. We still couldn’t even look at each other.

Shit, how long had I been sitting here like a dumbass, trying to come up with an answer? I cleared my throat. “Um. Sorry. Look, everything’s fine. We’ve just both had a lot on our plates lately. Or at least I have.”

Dad grimaced. “I suppose you have. How are things going with Michelle?”

Wincing, I avoided his gaze. “They’re… moving along.” Because goddamn, I needed to think about my divorce-in-progress on top of everything else right now. Fuck this. I had work to do. I pulled in a breath and looked at my father. “Is that what you brought me in here for? To ask about me and Marcus?”

My own phrasing almost gave me heart failure, as if Dad might read between the lines and realize there had ever been a “me and Marcus.”

He obviously didn’t, though. “That’s not all I brought you in here for, no.” His chair creaked as he settled back. “But I do need to make sure the two of you are getting along.”

“We are. I promise.” It was true enough. Wasn’t like we were at each other’s throats. Things were painfully awkward, but Marcus and I both took our jobs seriously, and we didn’t let our bullshit interfere with our work. Much. We’d definitely need to sit down and clear the air about a few things, but Dad didn’t need to know that. “It’s all good. Seriously.”

“Excellent.” He nodded sharply. “Because I need you to go with him to next week’s trade show in Boise.”

I blinked, struggling to comprehend all the WTF in that sentence. A trade show. Me. On short notice. With Marcus. W. T. F. “I… really?”

“He’ll be there with John and Allen. What does he need me for?”

Damn. The hits just kept on coming, didn’t they?

“Yep. Got poached by a competitor who shall not be named,” Dad grumbled. “Which is why I can’t go fill in at the trade show—Karen and I need to interview replacements for Allen.”

I bit back a curse. Karen, the director who oversaw our field representatives, would have been my next suggestion to fill in. But with one field rep quitting, another out on medical leave, and both Dad and Karen occupied with scrambling to replace Allen, that didn’t leave many options. I was pretty sure none of the other eight field reps could be pulled in for it either; their schedules were jam-packed as it was. We also had three in-house project managers who could theoretically fill in, but one was on maternity leave, one was in Germany to train our European reps, and the third was basically chained to his desk until the other two came back.

“I don’t have a choice, son,” Dad insisted. “This is a huge trade show, and I need someone there who has a working knowledge of the products. Especially the new line of cutting torches.”

I couldn’t suppress the grimace. No one knew the new line of torches better than I did. I’d designed the goddamned things and built two of the early prototypes myself. “But if I’m there, I’m not here to keep the department moving so we can release the new products on time.” I shook my head. “Dad, there’s no way—”

“I need you on this, Reuben.” There was a note of pleading in his voice that was so bizarrely out of character it rendered me speechless.

There really was no way out, was there? I was the only person who was both available—sort of—and knew the products. Marcus knew the products too, but only to a point. When potential customers had in-depth technical questions, they needed a field rep, a project manager, or an engineer. And since none of the engineers could be spared for something like this—and would probably resign in a heartbeat if someone said they were on trade show detail—that left me.

Deflating a bit, I said, “Okay. Just, um, email me the information about the show. I’ll let my department know I’ll be out of the office for a few days.”

Dad blew out a relieved sigh. “Good. I’ll have Maya forward you the itinerary.”

“Great. Thanks.”Just please tell me Marcus and I won’t be rooming together.