Hayden Somerset is convinced the ad is a joke, but he responds anyway because, hello, $1.2 million. He’s broke, living in a tiny apartment with two roommates, and exhausted from praying his ancient car survives just one more week. His skyrocketing rent and crushing student loans aren’t helping either. At this point, there isn’t much Hayden wouldn’t do for that kind of cash.

The ad isn’t a joke. Jesse Ambrose is absolutely serious. His father, the charismatic patriarch of a powerful Hollywood dynasty, has his eye on politics, and he’s counting on California’s liberals and progressives to elect him. But Jesse knows what his father believes when cameras and voters aren’t around. As the election looms, he’ll do anything to force the man’s hand and show the public who Isaac Ambrose really is.

Anything, including marrying a stranger so his father will make good on his promise to disown Jesse if he ever takes a husband.

Now he just has to wait for his father to take the bait… and try not to accidentally fall in love with his fake husband. 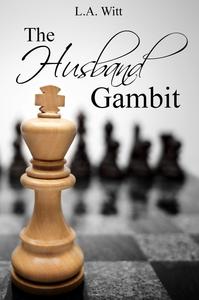 I laughed and rolled my eyes. “And that’s different from any other ad, how? This is Hollywood, babe.”

Luis frowned. “I’m serious. That’s not a normal ad. Not even in this town. It’s fucking weird.”

“Oh, it is.” I peered at my laptop and the ad I’d incredulously read aloud to my roommates. “But I won’t lie—I am curious.”

“I’d be curious too,” Ashton said. “How come no one ever offers to be my sugar daddy?”

“Because you’re straight, stupid,” Luis said with a laugh. “You need a sugar mama.”

“Hey, look, I’m broker than both of you. I won’t discriminate if someone wants to pay my bills.” Ashton, lounging beside me on the battered old sofa, craned his neck to look at my screen. “Does it say being gay is a requirement? Or could a straight guy—”

“Oh, no you don’t.” I turned my laptop away and shot him a playful glare. “I’ve got dibs.”

“That’s what I thought.”

“No, I’m not going to respond.” I started typing. “I’m responding right now.”

I chuckled, but didn’t say anything.

In the email, I wrote:

It was a benign enough email. The same generic response I’d send to any ad I’d found, but as I hit Send this time, there was an odd flutter in my stomach. Equal parts curiosity, amusement, and… jitters? As if the person on the other end might reply to me, and something might come of this besides them having a good laugh because someone had fallen for it? I couldn’t put my finger on it.

But the response was sent, and all I could do now was wait.

I closed the email, but there was still a browser tab open to the ad, and I couldn’t resist reading it one more time.

Marry me for 1 year.

I’m a man looking for a temporary husband. $100K per month. Cohabitation, legal marriage, and NDA are required. Sex is not. Contact for more info.

Okay, so I could totally see why Luis thought it was weird, but I mean, $1.2 million was $1.2 million. That would pay off student loans for all three of us and still leave enough for, I don’t know, a trip to In-N-Out for burgers or something.

It was probably a prank. Or a phishing scheme. I had no doubt just signed myself up for thousands of spam emails. That, or a team of hackers was, as I sat here, breaking into my financials and bleeding me dry. Joke was on them if they were. I hoped they liked In-N-Out, because that was all they were getting with my hordes of riches.

Ugh, I hated being this broke. Why had I let someone talk me into going to school again? Oh, right, because without a college degree, I’d spend the rest of my life pathetic, broke, and living with two roommates in a tiny apartment in a shitty neighborhood. Wait…

But hey, at least our shitty apartment had five degrees on the wall—all of our bachelors’ degrees, plus Luis’s MBA and my Masters in Theatre Arts that had totally not been a waste of time or money. Another few months and we could add Ashton’s MBA to the wall of shame too. After that, we could all celebrate by adding some actual seasonings to our ramen and toasting with whatever store-brand soda was on sale that week.

As long as there were no clowns involved. I was desperate, but a man had to have some standards.

We were halfway through an episode of The Big Bang Theory—oh my God there was nothing on today—when my email pinged. I jumped like someone had shocked me, and sent up the same prayer I always did when I had a new email: please tell me Carmen landed me another audition. That well had been discouragingly dry lately, but hope sprang eternal.

As soon as I’d opened the window, my teeth snapped together so hard I almost bit my stupid tongue. The email was not from Carmen.

I had to force back an excited announcement to my roomies that the mystery sugar daddy had responded. Better to see what he’d actually said before I made more of an ass of myself.

Holding my breath, I opened the email.

I swallowed, then wrote back: I need details, but yes.

If I hadn’t been curious before, I was now. If he asked for my bank details, then I’d block the hell out of him, but so far he hadn’t mentioned anything about being a Nigerian prince. Not necessarily promising, but definitely intriguing.

The next reply came in seconds:

Would you be willing to meet? I would prefer not to discuss this via email.

I cleared my throat. “So hey, remember that sugar daddy ad?”

Both my roommates turned to me.

I gestured at the screen. “He responded. He wants to meet to talk details.”

Luis made stabbing motions and mimicked the shrill music from Psycho.

Ashton leaned closer, peering at my screen. “Did he give you any more info?”

“No, he just said he doesn’t want to discuss it via email.”

I quickly googled the restaurant, which turned out to be an insanely exclusive high-dollar place in West Hollywood. “Holy shit. I probably can’t even afford the tap water at this place.”

Ashton whistled. “No kidding. So are you going to go?”

Some part of me thought the smart answer would be “Uh, no,” followed by deleting the email, closing my laptop, and never speaking of this again. But in some way, every step I took down this rabbit hole made me curiouser and curiouser. Who was this guy? What was his deal? And who the hell needed to hire a husband—an actual, legal husband—anyway? Was this some sort of romcom sitch where he had to get married in order to stay in Daddy’s will?

Luis huffed. “Dude. If this guy’s rich enough to pay someone a million bucks to marry him, doesn’t that tell you that maybe there’s a reason nobody’s been willing to marry him for free?”

“Shut up,” Ashton hissed. “Hayden’s about to get rich.”

Luis shook his head. “No way. I’m not having any part of this.”

Ashton rolled his eyes. “I’ll go. My car will actually get you out there without breaking down, too.”

He… wasn’t wrong. My poor clunky beater was one sudden stop away from going to the big parking lot in the sky, but Ashton’s ancient Honda was still puttering along somehow. Seriously, that car was immortal.

“Okay. Thanks. I’ll see if I can smuggle out some breadsticks or something.”

I chuckled and turned my screen. With a little trepidation, a lot of curiosity, and maybe a pinch of excitement, I wrote back: