We should have all been in it to the end. Selena’s death hit all of us hard, especially Levi, and I cringed at the memory of her slipping away after the motorcycle crash. I didn’t know if Levi heard it, but I couldn’t forget the silence that had followed her heart’s last feeble beat.

Of all of us, she shouldn’t have been the one to die. Hadn’t she suffered enough already? Destined from childhood to be bonded—spiritually married—to Levi, and then destined to be alone when he turned out to be gay. She’d selflessly given him her blessing to bond with Ian, and she’d kept Levi and me from killing each other while we’d tried to find Ian. When another wolf pack held us all prisoner, she’d used herself as human collateral to give us a fighting chance at getting to Ian before the pack found and killed him.

And last night, after the cars and bikes had stopped and the bullets had finished flying, it was Selena—Levi’s best friend and the only wholly innocent one among us—who’d died on the blacktop. She’d had no part in causing all of this to happen, and in my eyes, her suffering and death were the biggest crimes.

If only to honor her memory and keep her death from being pointless, the three of us had to continue.

I turned my head, watching Ian sleep. If there was one advantage to being a vampire, it was this spectacular night vision, and like the ceiling above me, Ian’s features were clear as day. He lay on his stomach, the pillow obscuring one side of his face, and looked deceptively peaceful. I resisted the urge to brush a few unruly strands of his dark hair back into place. Much as I wanted to touch him, just to remind myself again that he was really here and really alive—as much as a vampire could be, I supposed—I didn’t want to disturb what little sleep he’d been able to get.

On the other bed, Levi was almost completely motionless. We’d propped his injured knee up on a couple of pillows, and he hadn’t moved all night except whenever he startled awake. A dark bruise peeked out from beneath his collar and climbed the side of his neck. Just from the way his shirt rested across his chest, the swelling from his broken collarbone was unmistakable. I shivered; I’d long since converted when I broke my own collarbone some years ago, and it had healed in a matter of hours, but it was still beyond excruciating. Between that and his ribs, he’d be in a world of hurt for a while.

Beside me, Ian’s pulse and breathing shot up again as he jerked out of unconsciousness for the hundredth time. I closed my eyes, cringing on his behalf. Maybe lying awake like this was the lesser of two evils. At least then I didn’t have the dreams that must have been kicking him awake four times an hour.

His breathing slowed. So did his heart, both returning to a more normal cadence.

This time, though, he spoke.

“You ever going to sleep?”

I turned on my side and ran my hand up his arm. “Says the man who keeps waking up.”

“Be my guest.” He rolled over and faced me. “You’re more than welcome to these dreams.”

“Yeah, I figured.” Ian closed his eyes and sighed. “If I wasn’t so damned exhausted, I wouldn’t even try to sleep, because I just keep seeing last night happen again and again.” He shivered. “It was one thing when I killed the wolf in Grants Pass. I know he was a man too, but seeing him as a wolf… I guess…”

“Made him less human?”

“Yeah, I guess. I know that sounds cold. Killing an animal isn’t very high on my list either, but it just made it easier to deal with.” He rubbed his eyes. “Last night, though…”

“You did what you had to do, Ian.” I stroked his cheek with the backs of my fingers. “The wolf in Oregon was self-defense, and last night was keeping Levi alive. You’re not a murderer.”

“Semantics,” he whispered. “Yeah, I had to do it. Yeah, I could probably convince a jury it had to happen. Doesn’t change the fact that I’ve killed four people.”

“I know.” I rested my hand on his waist and leaned in to kiss him gently. “Believe me, I know.”

“So what’s keeping you awake?” he asked.

He slid his hand over my leg. “Okay, maybe I should ask if there’s something specific keeping you awake, or if it’s our whole situation?”

“Just trying to figure out our next move.”

“Not really.” I propped myself up on my elbow and looked past Ian at Levi, who was still asleep. “He’s not going to be in any condition to drive any time soon, which means we’re limited to traveling at night. And I’m…” I hesitated.

Ian ran his hand up and down my arm. “What?”

“I’m worried about him,” I said, barely whispering. “His injuries. What if something gets worse, or I’ve overlooked something?”

“If anything serious was going to come up, it probably would have by now.”

“What can we do? We can’t take him to the hospital.”

Ian scowled. “Darius, odds are he’s fine. He had a helmet on. He probably wishes he’d lost some sensation, and if you knew Selena was bleeding internally, I’m guessing you would have known if he is or was.” He raised his eyebrows.

I nodded. “Yeah, we both would have.”

“Okay, so he most likely isn’t and wasn’t. There isn’t much anyone can do for a broken collarbone. He’ll be hurting for a while, but beyond that…”

“Yeah, but what if it’s something worse?” I asked. “A rib puncturing his lung, or some loose sliver of bone, or…”

Ian glanced over his shoulder at Levi. Then he faced me, and his expression was deathly serious. “I think you and I both know what can be done.”

“What do—” I stopped midbreath when the piece fell into place. “No. Absolutely not.”

“Is it?” I gestured sharply at Levi. “The conversion alone could kill him. It’s dangerous anyway, but for a wolf?” I shook my head. “Way too risky.”

“Why? How is it worse for a wolf than a human?”

I met his eyes, trying to ignore the pang of guilt in my chest. “You were almost dead anyway. Had you been a wolf…”

“Why weren’t you, anyway?” I nodded toward Levi again. “Wouldn’t that have made things easier with his pack in the very beginning? If you’d been a wolf?”

He shrugged with one shoulder. “Maybe. I still would have been a half wolf in their eyes, which I guess is better than being human, but I just didn’t want to be a wolf any more than—” He cut himself off.

“Any more than what?”

He shifted his gaze away from mine. “Any more than I wanted to be a vampire.”

He touched my face. “I told you, I didn’t leave you a choice. You could have just let me die, but looking back, I never should have put that decision on your shoulders. I wasn’t… I wasn’t thinking clearly, or I never would have put you in that position.” Before I could speak, he gestured over his shoulder at Levi. “But he wants to convert.”

“He’s grieving.” I paused, listening to Levi’s heartbeat. When I was satisfied he was still asleep, I went on. “He’s spent his entire life being taught vampires were to be at best scorned, at worst killed. Becoming one of us is not a decision he can make that quickly. He’s got a lifetime of indoctrination to shake off before he can be remotely rational about it.”

“Maybe so,” Ian said, “but the fact is, we’re all in very real danger now, and his injuries could slow us down and get him or all of us killed. Converting him may be the best option we have.”

“It might be, but we don’t know that yet. Let’s see what our other options are first, because once we convert him, there’s no going back.”

“Getting killed isn’t terribly reversible either.”

Doing the right thing could destroy everything.

Levi, Ian, and Darius escaped death-by-wolf-pack by the skin of their teeth, but they’re not out of the woods. The wolves are relentless. Help from humans? Not likely. Their only hope is a vampire commune in remote western Canada—if they make it in one piece. Even then, there’s no guarantee they’ll be offered sanctuary.

The first challenge is to get there. Sunlight is deadly. Money is dwindling. Police and wolves alike are on the hunt.

Worse, Levi hasn't recovered physically or emotionally from the accident that broke several of his bones and killed his best friend. He desperately wants Ian or Darius to turn him, which would heal his wounds, speed their escape, and sever his last tie to the wolves that made his life hell.

Yet Darius hesitates, caught between his desire to help his lover, and fear that once this is all over, Levi and Ian will have no use—or desire—to keep him in the picture. And that’s assuming they all make it to the end of this alive…

This 98,000 word novel was previously published. 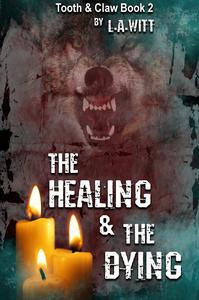 TITLE: The Healing & The Dying