TITLE: The Given & The Taken 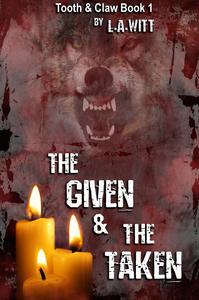 Levi finally persuaded his wolf clan to allow him to bond to Ian instead of his predestined female mate. The catch? They have to spend a year apart after the bonding ritual. Then Ian must—using only their newly-forged spiritual connection—seek Levi out, proving the bond actually worked despite Ian being human.

Now the year is over, and Levi is desperate to have Ian back in his arms, but there’s one problem—Ian’s changed. In a moment of weakness during that agonizing year apart, Ian cheated… with a vampire. Now Ian himself is a vampire, and a devastated, furious Levi wants nothing to do with him.

That is until he learns his clan wants Ian brought to justice for desecrating their most sacred ritual. If they find him, they’ll learn he’s a vampire, and kill him. Afraid for Ian’s safety, Levi rushes to find him.

Darius, the vampire who converted Ian, tries to take him someplace safe, but when Levi catches up, all hell breaks loose. Now Ian’s on the run with a dead wolf’s blood on his hands, and the only way Levi or Darius are going to get near him is to work together.

They need to get to him before the rest of the clan… assuming they don’t kill each other first.

This 118,000 word novel was previously published.

It was unusual, to say the least, for wolves and humans to be as compatible as we were, but Ian and I were perfect for each other. Absolutely perfect. He’d seen me in my wolf form, but unlike other men I’d dated, he never batted an eye at being physically intimate in my human form. Nothing had changed between us the day I told him what I was.

The rest of the pack said Ian was a distraction. He kept me from being around the other wolves as much as I used to. He was the reason I’d leave the pack’s farm for days at a time. They were all convinced we were just a couple of sex-obsessed lovers who’d eventually get it out of our systems.

They didn’t have a clue. It would have stunned them to learn we spent hours on end just lying in bed and talking. Of course we had a scorching-hot sex life, but it was the long, intimate conversations that kept me in his bed until all hours of the night. I loved his dry sense of humor. I loved the way he couldn’t keep his hands off me while we talked—fingers in my hair, along my arm, across my cheek. I loved everything about him.

But maybe that wasn’t enough.

An hour passed. Another.

My pants legs hissed against the three-inch snowdrifts on either side of the path I’d tramped down, brushing powder free and adding a whisper to the rhythm of my boots on the frozen ground as I continued pacing. I considered going somewhere else, somewhere I could warm the feeling back into my hands and feet, but I stayed put. If Ian did try to track me down, it’d be easier for him if I stayed in one place. Following such a sense had to be alien for him, and if I moved beyond just wandering around this clearing, it would only disorient him. Humans weren’t as accustomed to following senses besides sight and hearing, navigating based on a nebulous “feeling” must have been confusing as hell.

I stopped pacing. The base of my spine tingled as that sense of Ian grew stronger. Holding my breath, certain it was my imagination, I homed in on that pull. On him. It was indeed stronger now than it had been earlier, so he must have been closer. And moving. Drawing closer by the minute.

Relief warmed my veins. Maybe he would show up after all.

My heart pounded. Restlessness and the need for warmth got my feet moving again, and I resumed pacing. Back and forth. Back and forth. Minute after minute, step by step. Back and forth. Another hour inched past as Ian inched closer to me, and all the while, I searched the air, tasting it for the first hint of him.

There. Relief turned to anticipation. Closing my eyes, I drew in a deep breath, savoring that scent that had been lost to me for one long, long year. I opened my eyes and paced even faster, desperate to ease this nervous energy, this tension that had me tempted to break into a run. He’d be here soon. Very soon. I’d waited this long; I could wait a few more minutes. He had to find me. Then this would all be over.

Stronger. Closer. It was all I could do not to start toward him, dragged like a powerful magnet by an unseen and undeniable force. My nerve endings tingled, as if electricity crackled across my skin, ready to arc from me to him as soon as the distance—

I stopped in my tracks, one foot suspended mid-step. My blood turned colder than the wind around me. Something in the air was off. Wasn’t right.

I wasn’t alone. Ian was closer than before, much closer, but there was someone else.

I took another deep breath, and my hackles went up.

The scent was unmistakable. Not like death or decay like many would expect, perhaps not even an actual smell. It was more of a disturbance. Like an itch. An irritation. The tickle in the back of the throat that demanded a cough, the sting in the nose that warranted a sneeze.

What I didn’t smell was blood. Not even the faintest hint, which meant it probably hadn’t fed recently, and there were few things more dangerous than a hungry vampire.

Panic surged through me. Wolves could sense vampires from a safe enough distance to avoid them. Humans couldn’t. Ian wouldn’t know it was there until he could see or hear it.

And nothing outran a vampire.

Fuck the ritual. I didn’t lead Ian out into the middle of nowhere to be hunted.

I lunged out of the clearing, sprinting across the slick ground with practiced agility, cursing the snow that crunched loudly beneath my boots and the ice that threatened to send me to the ground. I was faster and stealthier as a wolf, but the transition took precious seconds I couldn’t afford to waste.

Every breath of cold air I dragged in burned my nose and lungs. My boot caught on a snow-covered root, and I stumbled, then slid on the snow before grabbing a tree to right myself. I paused, eyes darting around in the darkness until I was doubly sure I’d oriented myself to him; then I was off and running again.

My every sense thrummed with Ian’s presence as it drew me toward him, but even that powerful, electric pull couldn’t stop my skin from crawling beneath this intensifying itch. My eyes stung, but I couldn’t tell if it was from the wind or the vampire. Either way, I wasn’t stopping until I got to Ian, and come hell or high water, I’d get to him before that bloodsucking creature did.

Slipping and sliding on icy leaves and moss, I rounded another bend. A silhouette stood out against a gray backdrop of moonlit snow, and we both stopped, facing each other.

“Oh, thank God.” I hurried to him, threw my arms around him and held him to me. Closing my eyes tight, I forced myself to stop panting and freaking out long enough to draw in a deep breath of him through my nose and—

I opened my eyes. Released my breath. Drew another.

Shoving myself off him, I staggered back and stared at him, narrowing my burning eyes so I could make him out in the darkness.

He dropped his gaze.

But too many pieces fell too easily into place. The sudden disappearance and reappearance on my radar. The change in the way I sensed him. The fact that he hadn’t come to me until after sundown. The burning in my eyes and nose.

I finally found enough breath to whisper, “Why?”

He shifted, the frozen ground crackling beneath his feet. “It wasn’t…” Rubbing the back of his neck with both hands, he turned away.

My heart dropped. Curling and uncurling my hands at my sides, I was torn between reaching for my lover—my bonded soulmate, for God’s sake—and refusing to touch the creature he’d become.

He lowered his hands but didn’t turn around. “A…friend.”

The world listed beneath my feet. Forcing back the lump in my throat, I said, “A friend did this to you?” My heart sank deeper. “You let him convert you, when you wouldn’t let me?”

Ian faced me now, and though he was mostly eclipsed by shadows, the light from the moon and off the snow illuminated just enough to reveal his set jaw, his gaunt cheeks, his exhausted eyes. Looking him up and down, I realized he’d lost weight. Even the heavy jacket couldn’t mask that, and when he reached up to sweep some of his long hair out of his face, his hand was bonier than I remembered.

Becoming a vampire hadn’t done that to him. If anything, most people looked rejuvenated after they converted. They were the very picture of robust health; appearances were certainly deceiving when it came to these vile creatures. It took years for anything to take a noticeable toll on a vampire, but Ian looked a decade older than when I last saw him. Thin. Exhausted. It wouldn’t have surprised me if he was pale too.

What’s happened to you?

“He was a friend.” He pushed his shoulders back and looked me in the eye. “I didn’t ask for this.”

The hairs on the back of my neck stood on end. “He converted you against your will?”