After years of trying to complete their family, Gabe and Shahid are at the end of their tether. When yet another adoption falls through, Gabe is ready to give up. Shahid isn’t far behind him. Apparently being a gay couple—half of which is Muslim—is just one strike too many.

Then their friend Kendra suggests carrying their baby for them. None of them like the odds or invasiveness of IVF, but there is one other method they could use. Though Shahid is gay, Gabe is bi, and they both quickly warm up to the idea. Especially when they realize just how much chemistry they have with her.

It’s a simple plan—Kendra will have the baby, they’ll all share parenting responsibilities, and the means of conception will be a hell of a lot more fun than adoption paperwork or medical procedures.

As things heat up between Kendra and Gabe, though, Shahid’s long-buried insecurities about being with a bisexual man bubble to the surface. When some medical news stops everything in its tracks, they realize just how many emotions are involved. And no matter how they play this, one person might be left out in the cold.

This 80,000 word novel was previously published. 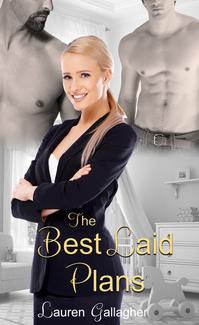 Gabe walked into the teachers’ lounge, and my heart dropped to my feet.

I knew that look. Eyes down. Shoulders down. Moving at half the speed of everyone around us, even slower than the groggy high school kids shuffling down the hallway on the other side of the door. It took a lot to slow Gabe, and I hoped I was wrong about what had happened this time.

When he was back in his classroom, he’d probably be able to fake it. He was good at that most of the time. Once he was in front of the kids, talking about atoms and electrons, he’d wake up and be “on”, but the minute he was alone, he’d deflate to, well, this. The man who’d managed to put himself together—shirt and tie, everything pressed and coordinated, short dark hair neatly arranged—and probably hoped no one noticed he’d nicked himself three times with his razor. Yeah, he was out of it.

Please, please, let me be wrong…

While he refilled his ever-present coffee cup—the one with the long-faded West Midlands High School logo on it—I joined him.

“Hey.” He didn’t even look at me as he stirred some sugar into his coffee.

There was no point in asking if everything was okay. We both knew it wasn’t.

His hands stilled. Closing his eyes, he exhaled, and his shoulders sank even lower.

I touched his arm. “What happened?”

Gabe swallowed. Turning to me, he whispered, “The adoption fell through.” His tone dripping with bitterness, he added, “Again.”

Though I’d fully expected it, my stomach flipped. “Jesus. I am so sorry.”

He took the spoon out of his coffee and, as he wiped it off with a paper napkin, ground out, “Apparently the mother had eleventh-hour second thoughts about letting her son go to a Muslim father.”

I scowled. “That’s what happened last time, isn’t it?”

“Yeah. Probably the first time too, but no one ever told us exactly why she changed her mind.”

“Can they do that? Reject you guys based on religion?”

“The agency can’t, but the mother can pick and choose for any reason.” He ran a hand through his hair and laughed humorlessly. “It’s funny—we went into this expecting to get turned down left, right, and center because we’re gay. But apparently Shahid being Muslim is a bigger deal-breaker than we thought it would be.”

“Except you two have known this mother for, what, two months now?”

Gabe flinched, lips pulling tight, and I thought for a second he was going to break down. Instead, he swore and rolled his shoulders, which were visibly stiff. “Almost ten weeks. Hell, Shahid’s gone to some of her appointments with her. She even raved about how much she loved having a nurse go with her, because he knows what questions to ask, and he called out an OB who was blowing off her concerns.” He shook his head. “But now we’re back to square one.”

I didn’t know what to say. Anything that came to mind sounded like the same empty platitudes he’d be hearing from everyone else who’d known about the arrangement. Which, unfortunately, was the entire faculty. Despite Gabe trying to keep it a closely guarded secret in case it fell through again, someone had overheard a conversation he’d had with the principal, and suddenly it was all over school.

“I know.” He smiled weakly. “Thanks. I really appreciate it.”

He cleared his throat. “I should get to class.”

“Yeah, me too.” But I didn’t move. “You know you can take a day off, right? They have subs for this very reason.”

“I need to save my time off. In case—” His lips tightened, and he avoided my eyes. “In case an adoption does go through.”

“But you can take parental leave for that, right?”

“Yeah, but there’s the meetings and…” He sighed, shaking his head. “I’ve already burned half my PTO for this one, and look where it got us.” He waved his hand. “And anyway, Shahid’s off work today, and I think having me around only makes him feel worse.”

I doubted that, but said nothing. Shahid might’ve felt guilty, but I couldn’t imagine any situation where these two would feel worse together than apart. They weren’t helpless without each other, and they weren’t codependent or anything like that, but they had each other’s backs like no other couple I knew.

He screwed the lid onto his coffee cup. “Well. I guess there isn’t much I can do.” He gestured toward the door. “We really should get to class.”

“We should.” I hugged him gently, and he returned the embrace, sighing heavily as he did. Still holding on, I whispered, “I wish there was something I could do.”

“I know. And I appreciate it.” He let me go, and as he met my gaze, managed a faint smile.

I returned the smile as best I could. Then we took our coffee and headed off to our respective classrooms, because what else could we do?

Over the next few days, I couldn’t get Gabe and Shahid out of my mind. I’d known them since forever, and it broke my heart that they were struggling this hard to adopt a baby. They both desperately wanted children, but the deck had been stacked against them from the start. They’d even tried fostering for a little while, but gave up when someone threw a fit about Shahid “indoctrinating” the kids after a boy asked him some questions about Ramadan.

After eleven years together, nine of them going through the motions of trying to start a family, they were starting over. Again. Sometimes it seemed like they hadn’t even left square one. They’d both known this would be an uphill battle, but I couldn’t help wondering if either of them had grasped just how taxing it would be. God only knew how their marriage had stayed so solid through the whole thing—that alone should’ve been enough to negate all the other reasons they kept getting rejected. So what if they were a same-sex mixed-raced mixed-religion couple—their marriage left no doubt in my mind that any child of theirs would grow up in a stable, loving environment. Had I ever been in a position to put a baby up for adoption, and saw those two as potential parents, I’d have thought I struck the damned jackpot.

But nine years into this, they remained childless.

It wasn’t fair. I couldn’t make sense of the fact that these two couldn’t have the family they desperately wanted, and yet the asshole I’d caught cheating three years ago was already expecting number two with his new wife. He hadn’t even wanted kids, though apparently he was over the moon about having them with her.

Gabe and Shahid had been my anchor during my divorce. They’d been friends with us as a couple for years, and immediately had my back when they found out he’d been sleeping his way through town for most of our marriage. To this day, all I had to do was mention Tim’s name, and Shahid would start foaming at the mouth and Gabe would start spitting nails. Shahid had even been so pissed off one night, he’d gotten drunk right along with me despite his religious avoidance of alcohol.

I was over the divorce and my SOB ex-husband, but I couldn’t help getting pissed off that the universe had seen fit to give Tim a picture-perfect family while the two sweetest, gentlest men I knew were starting to give up hope. It just didn’t make sense.

The day wore on, and so did the week. As time passed, though Gabe seemed to bounce back, that sadness still lingered in his gaze. The same thing had happened the last couple of times—he’d recover enough to carry on, but these “setbacks” as he called them were demoralizing. They snowballed. Every time an adoption fell through, he’d dust himself off and say the next one would work out, and he always sounded less certain than he had the time before.

This time, he didn’t say it. Even as word got around the school, and the other teachers cautiously asked him what he and Shahid planned to do now, he didn’t force his usual optimism.

“Our profile is still active with the agency,” I heard him say a dozen times. “We’ll see what happens.”

What’ll happen, I thought bitterly, is the same thing that’s happened every time.

I just wished I could help.

On my way back from the teachers’ lounge for my third-period physics class, I stopped so quickly, two football players nearly mowed me down.

“Sorry, Ms. Bailey!” one called over his shoulder as they hurried past me.

I mumbled a “Don’t worry about it” that he most likely didn’t hear.

What if I could help Gabe and Shahid?