For the last twelve years, Ryan “Angel” Morgan and Dante James have been partners in every sense of the word. They’re lovers, they run a successful photography business together, and couldn’t be happier. The only problem? They’re both dominants who crave submission.  Solution? Bring in submissives for sizzling hot threeway action.

When Jordan Steele hires the photographers from his sister’s wedding to shoot some promo pictures of his stallions, the sparks fly. There’s something about them, something that’s anything but vanilla, and he wants a taste of it. He’s inexperienced, but curious, and Angel and Dante are more than happy to show him the ropes.

Jordan is exactly what they need and they’re exactly what he needs, but when emotions come into play, he may be more than they bargained for. After all, the one thing Angel and Dante can’t give each other is submission. If one of them can get love and submission from Jordan, will the other be pushed out of the picture?

This 100,000 word novel was previously published. 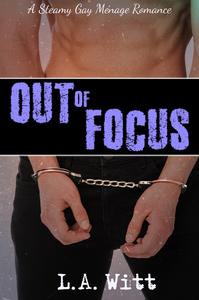 TITLE: Out of Focus

I slid my hand onto Angel’s knee under the table. As he often did, he’d been tapping his foot against the chair leg, but he stilled beneath my hand.

“You get a look at the brother of the bride?” I asked.

He whistled, sliding his hand over mine. “Oh God, yes. I got several looks at him.”

“You and me both.” I shook my head. “That man is liquid distraction.”

“No shit.” He ran his thumb back and forth along my wrist. “Imagine how I felt, trying to focus on the bride when I had that standing there being all gorgeous and entirely too dressed.”

“Too dressed?” I glanced in Jordan’s direction, then turned back to Angel. “He’s in a tux.”

I chuckled. “Pity he’s already got someone.”

“Seriously?” Angel released a sharp huff of breath. “The good ones always do, don’t they? It’s a crime, I’m telling you.” He clicked his tongue. “And his other half probably doesn’t share, either.”

“I don’t know; I didn’t ask. He was pissed enough that I interrupted their little lover’s quarrel.”

“Well, I didn’t have much choice.” I turned my hand over under his. “I needed Jordan’s help with something.”

“Yeah,” he said, lacing our fingers together, “I’ll just bet you did.”

“Okay, so I didn’t.” I shrugged. “But things were getting a little heated between them, so…”

That much was true. We had our subtle ways of separating people when tensions got too close to a breaking point. Situations like that, particularly with the way alcohol and grudges made frequent appearances at weddings, could too easily erupt into a screaming match or a fistfight. So, we’d long ago devised ways to casually intervene. Moderately intrusive? Yeah, probably. But if it kept a wedding from turning into a brawl—and that had been known to happen—then it was worth a little social faux pas.

The bride and groom were making the rounds, saying hello to guests while Troy’s and Phoebe’s cameras flashed. Normally I wouldn’t leave assistants to cover anything without at least one of us shooting as well, but these two kids were damned good. They were going to be some serious competition for us when they were out on their own. Assuming Troy ever got a decent pair of shoes, anyway.

So, we didn’t worry about them while they trailed the newlyweds and we took a break. Ah, it was good to be the boss.

As dinner wound down, the cake cutting and such were coming up. Almost time to get back to work. While I did a quick battery check and changed out my memory card, fabric rustled behind me.

“Absolutely.” I started to turn around. “This food is—” The words stopped in my throat. That wasn’t the groom standing next to her.

She gestured at him, as if I hadn’t noticed his presence. “This is my brother, Jordan.”

“We haven’t.” Angel stood and extended his hand. “Ryan Morgan.”

Jordan shook his hand. “I—it’s…” He paused, moistening his lips as a hint of pink appeared on his cheeks. “It’s nice to meet you.”

To her brother, Jennifer said, “I need to go pretend to like my in-laws, so I’ll leave you alone with them.”

He chuckled. “Okay, thanks.” She picked up her skirt and headed back toward some of the other tables. After she’d gone, Jordan said, “I, uh, my sister said you guys do pretty much any kind of photography?”

I cleared my throat. “What did you have in mind?”

“I breed and train horses,” he said. “And I’m campaigning a couple of stallions this year. I need a few more up-to-date photos for my website and some ads.” He raised his eyebrows. “Is that something you guys would be interested in doing?”

Jordan blushed even more, dropping his gaze as he muffled a cough of laughter. “Right. Well. I haven’t had great luck with my last couple of photographers, so I’m very much in the market for someone new.” He paused, the color in his cheeks deepening slightly. “A new photographer, I mean.”

“Can you handle two?” Angel asked.

If the poor man’s cheeks got any redder…

“I’m sure we can help.” I shot Angel a glare, and he widened his eyes as if to say “What?” I rolled mine and looked at Jordan again. “We haven’t done any equestrian work in a few years, but show us some examples of what you have in mind and we should be able to give you what you want.”

A shy smile played at his lips. “Good. Then—”

His teeth snapped together as his significant other materialized and put a hand on his shoulder. Jordan’s hackles went up, his eyes narrowed, and judging by the way his cheek rippled, he must have been tightly clenching his jaw. The two men exchanged the coldest glare I’d seen at a wedding since the last time we put divorced parents into one picture, and the hand on his shoulder lifted away.

Then Jordan shook himself back to life and made a sharp gesture his companion. “Sorry, I’m being rude. This is Eli. My—”

“Just Eli is fine.” He didn’t offer a handshake or any other greeting, and neither of us made any attempt to do so either. Awkward silence descended, and I had a feeling Jordan was once again seconds away from lashing out at his…just Eli.

“Anyway, you were saying?” I asked Jordan. “About your photos?”

“Right.” Jordan cleared his throat. “Anyway, I’d like to sit down and discuss what I’m pricing, scheduling, all of that.”

“When would be a good time?” I asked. “If you’d like, you can come by the studio, and we’ll sort out the specifics.”

He nodded. “I can do that. During the week would be best. My weekends are usually shot.”

Angel pointed at his camera. “So are ours.”

Jordan laughed. “Yeah, I guess they would be.”

“Would Monday be good for you?” I turned to Angel. “We’re there all day this Monday, aren’t we?”

He nodded. “All in-studio shoots that day. Last one’s at four thirty, and we’re usually there until six or seven.”

“Why don’t I swing in around five, then?” Jordan asked.

Angel pulled out his wallet and took out a card. “That’s the address. Just give us a call if anything changes.” Jordan took the card, but jumped like Angel had shocked him. Knowing Angel, he’d made sure their fingers brushed, and Jordan’s blood pressure was probably all over the place now.

Jordan recovered quickly though, sliding the card in his back pocket as he said, “Will do.”

Eli shifted beside him. “Good, now why don’t we go grab a couple of drinks?”

“Okay, okay.” Jordan exhaled and added a muttered, “Like you need another fucking drink.”

“Nothing.” Jordan looked at us. “I’ll see you guys on Monday. Thanks.”

We watched the happy couple wander toward the bar with a good arm’s length of frosty distance between them.

“You know,” Angel said, “I take back what I said earlier about it being a crime that a man like that is taken.”

“Yeah.” He turned back toward the table and picked up his glass. “It’s a crime a man like that is taken by a douche bag like that.”