It all started with an app that I knew better than to check at work.

I especially knew better than to check it during a meeting. I mean, I was not one to fuck around on my phone during meetings in the first place. If I did, I sure as hell didn’t load anything besides my e-mail and maybe some social media, just in case someone glanced over my shoulder.

Most of the time, I sat there and paid attention—or, like I had in high school, at least made a damned good effort to come across that way—even when there was no rational reason for me to be parked in a chair in a conference room instead of working. I didn’t bitch (much). Not even when my boss inevitably bitched at me later for being behind on the project I physically couldn’t work on while I was in Meeting Purgatory with her.

That day, my patience ran out. I already knew I’d be working late tonight because every minute I spent in here, listening to the architects and the property developers drone on and on about every fucking detail of their newest project, was another minute I wasn’t downstairs working. Once this meeting was over, my boss and the other architect would be on my ass about the model I needed to build—a to-scale rendering of the project they were all discussing. Ninety minutes into this, I could already hear them asking why the hell I hadn’t made any progress since lunch.

So, fuck it. If they were going to kill my Friday night and likely my weekend, then I was mentally checking out. Perhaps not my most mature moment, but I’d been out of coffee for forty-five minutes, so I didn’t care.

Carefully sitting back and leaning my binder up on the edge of the table, I surreptitiously propped my phone against the notebook. It was completely out of sight from anyone else in the room, and the sound was, of course, turned off. Perfect.

I listened for a few minutes to make sure they hadn’t gone off on some topic I needed to know about—they hadn’t—and shifted my attention back to my phone. At the bottom of the screen, a newish icon caught my eye. The little pair of crudely drawn handcuffs was tempting. So, so tempting.

No, better not. I’d only had the app for a couple of weeks, so it was still shiny and novel, but definitely not one I should be checking at work. Even if I wasn’t in a meeting. Which I was.

Then again, no one could see my phone.

No one was discussing anything that needed my input. None of my crew—the drafters and modelers I worked with on a daily basis—were here to sneak a glance over my shoulder, hoping to catch something they could razz me about until the end of time.

Nobody had to know.

Oh, what the hell?

I clicked on the app and got a little electric thrill when the Searching For Kinky Singles In Your Area…popped up. I hadn’t had much luck on here lately, but I also hadn’t checked it in a few days. And, well, hope sprang eternal. An app that found kinky people the way Grindr and Tindr found casual hookups? Hell yeah.

Seventeen? Last time, it had been fourteen, so that was an improvement. I tapped Show Me Matches, which I’d already set to Sort by Proximity.

Last time, the nearest potential match had shown as five miles away, which had been surprisingly close. Sitting in a meeting with my boss, one of the firm’s partners and a few reps from our multimillion-dollar client, I was not prepared for what came up on my screen.

Nearest Match—2 meters away from you.

And then I realized the match’s icon was green. They were not only in this room, they were online. They’d been active within the last few minutes. They could see me online and active.

No. No way. That had to be a mistake. Someone’s profile had the wrong location. Could’ve been someone on the floor above or below me. Maybe something in the building was interfering with the app or my GPS or something. There was no way in hell someone else in this room was viewing the same app and had been matched to me.

I lifted my gaze and cast a sweeping glance around the room.

Bob Mitchell, the partner, was still droning on about something. Dion Young, the gorgeous CFO of the client, Horizon Developing, had his phone out, but it was facedown on the table and hadn’t moved.

My eyes halted on my boss, Marie.

It couldn’t be her. Even if she was kinky—and I suspected sometimes that she was—my filters were extremely tight. I was specifically looking for a submissive, and the vibe she gave off pinged very, very heavily on the dominant end of the spectrum. It wasn’t unusual for management types to be subs, but I’d have been shocked if Marie had ever submitted in her life.

Besides, I’d also specifically filtered my profile for male submissive. I hadn’t even listed myself as bisexual because lately I’d been in the mood for someone very subby and very male.

I gulped and continued scanning the group.

My gaze landed right on Rick Pierce. The CEO of Horizon Developing. The wealthiest and most ambitious client who’d set foot in this firm in decades. The man who I was sure was the sole reason the suit had been invented.

And he was looking right back at me.

With his phone in his hand.

I raised my eyebrow. He quickly dropped his gaze.

The entire Internet could not have contained the sheer volume of images that suddenly flooded my mind. Rick’s brown hair—which was perfectly windswept right now—all messed up and dripping with sweat. A welt on his wrist that that shiny Rolex couldn’t quite cover. This powerful CEO who was always the very picture of boldness and elegance, kneeling naked at my feet, eyes wide and glazed, hands bound and shaking…

And suddenly my binder was hiding more than just my phone.

Chin down, Rick stole a glance at me from the corner of his eye. I chanced a subtle grin, one I was sure no one would notice but him, and I was rewarded with a little hitch in his breath just before he shifted his attention back to Mr. Mitchell.

If we’d connected on the app, then there were things I knew without a doubt about Rick Pierce. He was either gay or bisexual. He wasn’t in a relationship. He was submissive. He liked to be bound. He liked to be watched.

I shifted in my chair, hoping like hell this meeting didn’t end until I got this hard-on under control. That wasn’t an easy task. Not when I knew Rick was the type who absolutely combined kink and sex, as opposed to the guys who liked one or the other.

There were a few things up in the air, though. He was submissive, but did he prefer top or bottom when he fucked? God, if he likes both… 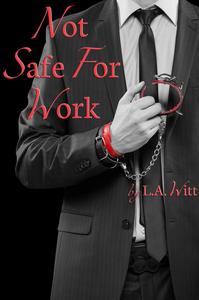 Bored senseless in a meeting, Jon McNeill amuses himself with a kinky dating app on his phone. Then the app matches him with another user…who’s six feet away.  Suddenly Jon finds himself on the same page as someone who’s way above his pay grade: Millionaire property developer Rick Pierce.

The app isn’t kidding, either. They’re a perfect match. Jon’s a Dom, Rick’s a sub, and they both love bondage. Both guys are well into their forties, know their way around the bedroom, and definitely appreciate a good suit. And the best part? They’re a match outside the bedroom too.

But office relationships aren’t easy to keep a secret. When the truth comes out, Jon is certain he’s about to get fired. Instead, he finds himself tangled up in a much bigger mess.

Contains two men who’ve only dreamed of this kind of sex, literal and figurative sex machines, blindfolds, a sub being punished during a business meeting, enough rope to tangle up a millionaire, and a Golden Girls marathon.

This 104,000 word novel was previously published.

TITLE: Not Safe For Work