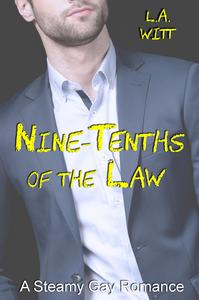 TITLE: Nine-tenths of the Law

Without trust, common ground can get pretty shaky…

“I believe you have something of mine, Zach.”

The stranger’s accusation throws Zach Owens for a loop. He’s never seen this man in his life, and he’s not prepared when he finds out what they have in common—their boyfriend, Jake.

Make that ex-boyfriend. With the jerk out of the picture, Zach hurries after the stranger to apologize… which quickly leads to some sizzling hot revenge sex.

Despite starting on the wrong foot, Nathan Forrester can’t get enough of the sexy movie theater owner. Still, he’s jaded and distrustful—especially when Jake keeps materializing in Zach’s presence despite Zach insisting that relationship is over.

With a devious ex-boyfriend trying to sabotage their fledgling relationship, Zach and Nathan need to learn to trust each other, or they’ll both wind up with nothing.

This 61,000 word novel was previously published, and has been revised to include an extended ending.

I couldn’t stop looking at him. Without the mask of anger, he was simply gorgeous. He had an infectious smile, the kind that was impossible not to return, especially when it crinkled the corners of his dark eyes. When he laughed—freely now, without the choked, bitter sound—there was music in his voice.

And that was just his face. I hadn’t had a chance to drink him in while he was standing, but what I could see above the table was anything but disappointing. His black shirt sat just right on broad shoulders, and the collar was casually unbuttoned, revealing a thin gold chain resting on his collarbones.

The sleeves were snug enough to show off his toned arms, and silver rings on his right ring and left index fingers drew my attention to his hands. Hands that could open and light a Zippo lighter in one fluid motion, something I’d never quite mastered in spite of trying time and again. I caught myself staring at his hands, watching the rings catch the light whenever his long, slender fingers drummed the table or played with the label on his beer bottle.

Those hands probably give a hell of a— I cut off that train of thought. Hell, this guy just busted his boyfriend cheating with me, and I’m thinking about what he’s like in bed? I’m either a seriously insensitive bastard, or I really need to get laid.

When I realized I’d been staring, I looked up, and a hint of a smile told me it hadn’t escaped his notice. He didn’t seem offended by it or creeped out. Amused, if anything.

As I took another long drink, not tasting a single drop of it, I figured it was probably a little of both.

I took a sip of beer, wishing it was about forty degrees colder. As I swallowed it, I glanced at Nathan just in time to see him drop his gaze. His face might have colored, or it might have been the dim light from the lamp above the table encouraging my wishful thinking.

After another round and some more conversation, he looked at his watch. “Shit, it’s almost midnight. Listen, I appreciate the beer,” he said, indicating the empty bottle. “I should probably go.”

“No problem.” My own disappointment surprised me. I should have been relieved that this was over, but my heart sank as he started to stand. Here comes that parting handshake, then we can both get on with getting over Jake.

He pulled his jacket halfway onto his shoulders, then paused, looking at me. “Are you staying?” Something in his voice seemed…uncertain. Hesitant.

He continued the motion of putting on his jacket, but slower now. Deliberately so. Waiting.

I stood and picked up my own jacket. He waited while I put it on, then headed for the door, glancing back to see—maybe to make sure—if I was following.

Outside, he stopped. “Where are you parked?”

“Actually, I live about half a mile that way.” I gestured in the direction from which we’d come earlier.

“My car is a block or so that way.” He nodded in the same direction and started walking, and my feet accepted his implied invitation to walk with him.

We weren’t so far apart this time. Maybe half an arm’s length, if that. Still not close enough to touch, but the wall of ice had melted.

He reached into his jacket and pulled out his cigarettes, then hesitated. He glanced at the pack, and a moment later, it was back in his pocket.

“Nah, it’s not that,” he said. “I’m not a heavy smoker, honestly. I only need the nicotine when I’m nervous.” Again, he went for his pocket, but again his hand came away empty.

In spite of our best efforts, we eventually reached the cross street, and Nathan stopped.

“My car’s that way,” he said quietly, gesturing down the street. “I should probably let you go.”

I couldn’t think of any reason to keep him here. No reason that made sense, anyway. My attraction to him was probably just out of spite for whatever-his-name-was who I was with a lifetime ago.

Nathan shrugged. “You didn’t know.” A cautious smirk tugged at his lips. “Sorry I screwed up your sure thing tonight.” We both laughed, but in the back of my mind, I wondered.

Did I dare? Hell, I had nothing to lose. Once we parted ways, we’d probably never see each other again.

Ignoring the fact that I had never, ever been this forward with someone in my life, I reached across the space between us and put my hand on his hip. “I don’t know, maybe you haven’t.”

His eyes darted to my hand, then to my face. The hand on his hip wanted to shake as I regretted making this move. He couldn’t possibly want me. Not after everything with Jake, after everything tonight, after—

He put his hands on my hips.

In unison, we both swallowed hard. Though our bodies were still the same distance apart, our arms now bridged that distance and seemed to diminish the gap between us. I couldn’t decide if he was too close or too far away.

His fingers hooked in my belt loops, and he pulled me to him. I slid my arms around his waist, as much for balance as closeness.

Our faces were inches apart now, close enough that I caught the all-too-familiar faint scent of cigarette smoke lingering under cologne. The faint scent of guilt. Of how we’d ended up here in the first place.

Like the end of a cigarette when a drag is taken, the dormant anger in my gut flared to life. That son of a bitch had played us both for idiots and screwed us both over.

I pulled Nathan a little closer, catching my breath when he pressed against me through our jeans. His lips thinned, some of the earlier anger returning to his expression, but his narrowed eyes still burned with arousal.

He tilted his head and leaned in a little more, his ragged breath warming my face, but he didn’t kiss me yet.

“Was this what you had in mind when you offered to buy me a beer?”

Laughing softly, he closed some of that minute remaining distance, but still he hesitated. Pulled back. He moved less than an inch or two away, and it was entirely too far.

In a hoarse, growling whisper, he said, “I know I shouldn’t, but I really, really want to kiss you.”

I resisted the urge to moisten my lips. “I’m not pulling away.”

“I know,” he breathed, leaning in before drawing back again. “But if I do…”

Before I could stop myself, I moistened my lips, very nearly touching his in the process. He shivered, releasing a sharp breath.

When our eyes met, I understood.

Once we started, we weren’t stopping.

I took a breath. “My place isn’t far up the street.”