When they’d told me about Africa, I’d had a very different Africa in mind. The one I’d grown up with thanks to National Geographic—the swollen bellied starving children and assault-rifle toting mass-murdering warlords that somehow existed alongside safaris full of cheetahs, giraffes, and elephants.

This place, however, was nothing like that. At the moment, I couldn’t even remember what country we were in. I was too tired, too distracted. But it definitely wasn’t what I’d expected.

Along paved streets and sidewalks, smartly-dressed locals hurried home from work, lattes and cell phones in hand, barely giving us a glance. If they did give us a second look, it was probably because we clearly didn’t belong here. We were anything but inconspicuous in our pressed white shirts and black ties, with black trousers that had looked so pristine back home before they’d encountered the city’s dust. A lot of people eyed our rectangular plastic nametags with palpable suspicion. I got the feeling they’d seen “Elder” and “The Church of Jesus Christ of Latter-Day Saints” before, and they didn’t seem thrilled to see those words again. No one did.

Isaac and I had come here to change the world, but apparently they’d heard it all before.

Standing here on a busy street corner, we had managed to talk to a few people—the locals were invariably friendly but also invariably excused themselves as soon as they realized what we were. It seemed like a lot of effort and nothing to show for, and it was nothing like what they’d told us it would be like. This city had done just fine before we’d come here, and it was going to do just fine after we left, and we wouldn’t be leaving much of an impression or changing anything. As far as these people were concerned, we were welcome, but more as guests and tourists than as missionaries.

I scratched my neck for the millionth time, and tugged as subtly as I could at the undergarments beneath my shirt and trousers. They were itchy anyway, and never had fit quite right. In this heat, they didn’t breathe. Because nothing made a man enthusiastic about sharing the Gospel than being wrapped in clingy, sweaty, bunching “fabric”—felt more like butcher paper or something.

Isaac fussed with his collar—probably being driven insane by the tag and seams, just like me—as he looked after one of the women who’d waved him off. He’d started toward her with that polite, almost plaintive, “Ma’am?” and for a moment I could almost see him through her eyes—this lanky teenager in his shirt and tie and slacks and polished shoes, whose baby face suggested he’d borrowed the clothes from his father, and his father might not even know he was wearing them. She waved him on his way like he was a suitor approaching somebody well out of his league—and she was too polite to be cruel.

Isaac blew out a breath and turned toward me. “Are they always like this?”

Oh, hadn’t I asked that question during my first few weeks? He’d only just started his mission. I was a seasoned veteran with six long months and two other passport stamps under my belt. I’d started recently enough to remember the sting and the frustration when people kept right on walking—or when they understood English right up until the moment they realized who and what we were—but I’d been at it long enough that it not only didn’t bother me anymore, it didn’t surprise me. Truth be told, it surprised me when they did stop to listen. Sometimes enough that I forgot the endlessly rehearsed words and had to stammer a few times before I found my bearings.

Sighing, I shrugged, ignoring the stickiness of my sweaty skin beneath my shirt. “Not everyone wants to hear the Gospel.”

A few months ago, I’d have shaken him by the shoulders and reminded him that people did want to hear Heavenly Father’s plan, and they would listen to us. Clearly we weren’t trying hard enough, right?

But that was a few long, miserable, eye-opening months ago. Back before I’d turned so cynical I barely recognized the superstar Mormon I’d been when I’d first stepped on the plane out of Seattle.

That superstar Mormon carrying crippling guilt and wondering if my best friend regretted what we’d done that last night, when we’d finally—

I shook my head and gestured past Isaac, pretending I’d been watching passersby instead of staring off into space. “Let me try this guy.” 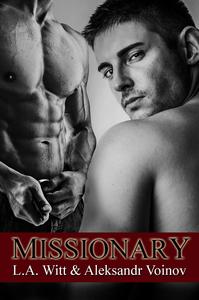 Before he found love, he had to find himself.

Mormon missionary Joshua Hawthorne vanished and was presumed dead for five years. Then, seemingly out of nowhere, he returned to Seattle a new man—a seasoned war veteran with a new accent and a new name. Now Julien, he came home to make peace with his dying father, and also to reconcile with Chris, his best friend and the man Julien had never stopped loving.

After reuniting, he told Chris about the night everything changed. The long, hot night spent with a group of soldiers from the French Foreign Legion. The night a disillusioned missionary could no longer deny who he was.

This prequel to No Distance Left to Run is the story of the night that changed Joshua’s life forever.