An ex-SEAL in a wetsuit, a bisexual President, and a First Lady with a tattoo on her ass…

Secret Service agent Kent Sinclair, head of POTUS security, thought he was prepared for anything. Then, the First Lady—a woman who barely tolerates his presence—approaches him with a request that startles the hell out of him.

Carlene Broderick is scared. Her husband James is buckling under the strain of the highest office in the land. With the weight of the country and an impending war on his shoulders, he’s a heart attack waiting to happen. Carlene is out of options, so she resorts to the man whose name James calls out in his sleep—a buddy from his SEAL days. His ex-lover. Kent.

There’s nothing Kent won’t do for his best friend, but he quickly realizes it’s not him that James needs—the Commander in Chief is desperate to give up complete control in the bedroom.  And if she’s willing, Kent can teach Carlene to be what her husband needs.

Now James is caught deep in forbidden territory—torn between his beloved wife and the man he’s never stopped loving. 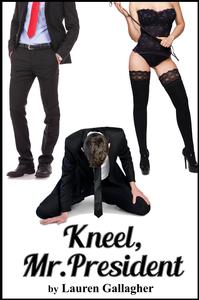 Tonight, Kent fully expected her to grab a bottle of Perrier out of the fridge and leave without saying a word, but Carlene stopped and faced him over the kitchen island.

Looking him right in the eye, she said, “I need to talk to you.”

Kent hesitated. Her tone had betrayed nothing—including none of her usual hostile annoyance—so he couldn’t begin to guess where this was going. “What about?”

She glanced at the doorway she’d just come through, then turned back to him. “James.”

Kent gnawed the inside of his cheek. “Uh, okay.”

“He’s…” She broke eye contact for a moment, and something in her expression softened. “The thing is, the presidency is killing him.”

Kent rubbed his neck. “I can’t really argue with you there.”

She glanced at the doorway again and then met Kent’s gaze. “I don’t know who else can help him but you.”

“I’m not… I’m not sure.” Before he could respond, she gestured at the sliding glass door. “Let’s go outside. I’d just as soon the kids didn’t overhear any of this.”

Kent doubted the kids or their father were awake by this point. They’d likely fallen asleep during a bedtime story, as they often did when James let them stay up to play video games. Still, he didn’t protest.

He followed Carlene onto the back deck. Out here, security wasn’t a concern—no one was getting near this lodge without breaching several checkpoints, and there were motion sensors and cameras out in the yard. If anyone did get close enough, there was always the Sig .357 tucked under Kent’s left arm.

Carlene rested her hands on the railing and stared out at the dark woods behind the lodge. Kent watched her. The soft light from inside and the harsher glow of the floodlights picked out the shadows and contours of her face. In this light, it was clear the presidency had taken its toll on her too. Usually, it was nearly impossible to tell. She had the skill of a Hollywood makeup artist, so she was able to hide it all from the public. In fact, she was like a modern-day Jackie Kennedy—every inch poise and perfection.

But like this, dressed down and without makeup, it showed. The heavy circles under her eyes. The gauntness in her cheeks. Kent suspected that if she stopped dyeing her hair, she’d have as much gray around the edges as her husband. They were both still young—she was just forty-one, and he was forty-six—but no one held the highest office in the land without aging prematurely.

Kent hadn’t even realized how long the silence had dragged on until Carlene spoke. “Did you know he talks in his sleep?”

“James.” She faced him, the exhaustion palpable in her eyes. “He talks in his sleep.”

Kent held her gaze, not sure what to say. Not sure how far to tip his hand.

She sighed, looking out at the woods again. “I’m not trying to bait you, Kent. I know about your past with him.”

“Oh.” Kent swallowed. “I, um…” He couldn’t remember James ever talking in his sleep. Then again, Kent usually fell asleep first, and half the time, they were both drunk.

“I’ve lost count of how many times he’s said your name.” She laughed bitterly. “He’s done it so many times, I…” Her jaw tightened, and she added through her teeth, “He does it all the time.”

Kent’s lips parted. “He does?”

She nodded slowly, staring out into the night. “During the day, he’s withdrawn and depressed. He’s moody. His temper is…” Clicking her tongue, she shook her head. “He’s a mess.”

“I know he is.” Tonight, James had been in a good mood—turning off Mr. President and turning on Dad mode usually had that effect on him. Kent shifted uncomfortably. “He’s going to be a wreck until this bullshit with the cartels is settled.”

“And then another crisis will come along.”

He couldn’t argue with that. James’s presidency had been one thing after another from the start. Kent supposed it was like that for every president—things always looked worse when you were closer to the action.

Carlene fell silent again. Kent wasn’t sure if he was supposed to say something more, or if she was lost in thought. Either way, he didn’t speak. This conversation was one hell of a minefield, and he wasn’t taking a step until he had a better idea why he was out here.

After a while, the First Lady took a deep breath. “The thing is, the more stressed-out he is, the more he says your name.” She folded her arms loosely across her chest and turned to him. “I can’t help thinking that whatever he needs to help him cope while he’s in office, you’re the key.”

Kent shifted his weight. “What is it exactly that you want me to do?”

“You two have a history.” She broke eye contact and glared out at the forest. “Go back to that history if you have to.”

“Our hist—” Kent blinked a few times. “Are you…are you asking me to…”

“Sleep with my husband?”

He gulped and then nodded slowly.

Carlene squared her shoulders and lifted her chin slightly, still staring down the trees. “If that’s what it takes, then, yes. Honestly, I don’t know what he needs. The only thing I’m sure of is that my husband is a mess, and in some way, he’s reaching out to you.” She shook her head. “I’ve done everything else I can think of.”

“My marriage is a moot point if a heart attack drops him.” She set her jaw. “I need my husband to be okay. If that means that he needs you, then…” She waved a hand. “So be it.”

“Please.” She stepped toward him, her eyes echoing the desperation in her voice. “James needs you. I don’t know why, or exactly what he needs from you, or what will help him, but I know he needs you.”

Carlene came a little closer, eyes locked on his. “Kent, I’ve seen the way you look at him.” There was no accusation in her voice. No anger. Maybe some resignation, but nothing more. “And I’ve…” She sighed. “I’ve seen the way he looks at you.”

Kent’s throat tightened. Yeah, he’d seen those looks too, but he’d forced himself not to read into them. “But…what will it solve? If he does need something from me, I can’t imagine it would change anything.”

“I wish I knew. Maybe he just needs to talk to you. Maybe he needs…” She stiffened a bit. “Maybe he needs more. But at this point, I’m out of options besides just sitting back and watching my husband wither away under all this pressure.”

Kent studied her. “I don’t even know where to start with him. I mean, I want him to be okay too. But what am I supposed to say? ‘Your wife just gave me carte blanche to—’”

“I get it,” she snapped. Then her tone and expression both softened. “Look, I’m going to go get some sleep. It’s been a long day for all of us.” She met his eyes. “The kids and I will be gone tomorrow morning. I’ve arranged for a short trip with them. You and James will be…”

She nodded. “I assume it goes without saying that anything that happens needs to be discreet.”

They held eye contact for a moment longer, and then she turned to go, leaving him standing there with his heart in his throat and no fucking idea what to do now.

As she reached for the door, Kent said, “I would never take him away from you, you know.”

Carlene stopped with her hand on the door and looked over her shoulder. “The last couple of years are proof enough of that. If you had wanted to during that time, I’m sure you could have.”

“Maybe, maybe not.” She pushed her shoulders back, though her posture lacked its usual effortless confidence. “But I don’t think he’s ever stopped loving you.”

That hit him right in the chest. James had never uttered the words to him, not even to reciprocate.

Carlene went on, “And…he trusts you with his life. If he does, then so do I.”

Kent had no idea what to say.