Five years ago, Darius awoke to an empty bed. He’s never forgotten Jordan, though, and now he wants to face the man—now a priest—who broke his heart.

Jordan has tried to put his sinful past behind him and focus on his duties as a clergyman. The only problem is that even half a decade later, he’s haunted by his feelings for the man he wasn’t supposed to love.

When Darius confronts Jordan, it’s a disaster. But it might also be the beginning of the second chance both men desperately need…

This 11,000 word short story is based on The Father Project by Tooji, and written/sold with permission. All royalties from Just Hear Me fund a short film project being produced by Tooji and the author. Any surplus (or monies received after the film’s production) will be donated to an LGBT charity of the author’s choosing.

The church must have been centuries old. It was huge and imposing, looming above the modern street with high walls built from stacks of cold gray stone like a fortress. It seemed less like a house of worship and more like a barrier meant to keep out enemies and evil while nestling the flock safely inside.

Any other day, Darius would’ve walked right by without giving the building a second look. Normally, he’d have no business in a place like that, and even today’s biting autumn wind wouldn’t be enough to drive him inside.

But this church had taken something from him, and he was here not necessarily to reclaim it, but to ask why.

Why did I wake up alone that day?

Why didn’t you say goodbye?

Darius’s gaze slid toward the sign on the wrought iron gate. It probably had all the usual pertinent details—the church’s name and denomination. Service times. Maybe a notice about an upcoming wedding or a baptism. Some piece of scripture meant to inspire love or fear or whatever it was the church wanted from people these days. Anything else a church felt the need to broadcast on a yellowing sign.

None of that registered in Darius’s mind. The only letters that made it from his eyes to his brain made his fists clench inside the long sleeves of his coat.

He snorted. Yeah, right. Something told him All didn’t include long lost skeletons from the good vicar’s closet.

Well, Darius hadn’t expected to feel welcome. He’d come here for answers, not warmth. After five long years, he’d made it this far, and he wasn’t turning back until he had those answers.

Closing his eyes, he took a deep breath.

I can do this. I will do this.

Then he started up the path toward the church. As he ascended the stone steps to the giant wooden doors, the music from inside raised the hairs on his neck. The hymns probably sounded warm and inviting to the congregation, but like the church itself, they had quite the opposite effect on him. At least he wouldn’t be showing up right in the middle of the sermon.

He didn’t want to hear the sermon or the hymns, but he needed some time, even just a few moments, to get used to breathing the same air as Jordan again. All he had to do was slip in during a song and take a seat in a pew at the back. From there, he’d listen to whatever Jordan had to say before Jordan—whether he liked it or not—was going to hear what he had to say.

Dozens of scenarios had been playing out in his mind over the past few weeks while he’d tried to work up the nerve to come here. Now, with nothing but a door and a church service separating him from Jordan, all those scenarios swirled through his brain. Maybe Jordan would be happy to see him, but Darius wasn’t holding his breath.

Too surprised to feel anything.

Maybe he wouldn’t even recognize Darius.

That thought made Darius’s stomach lurch. Of all the possibilities, he decided that was the most painful one: Jordan looking at him blankly with no idea who he was. That didn’t seem likely, though. A lot of time had gone by, but the two of them had way too much history to just forget it like that.

You’d better recognize me, you bastard. Darius clenched his jaw. I didn’t spend half a decade hurting like this while you moved on like it was nothing. 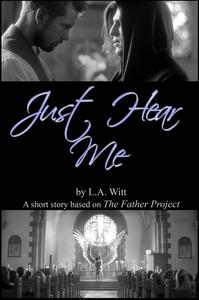 Based on The Father Project by Tooji.