Rock star Nate Keller is on top of the world, but his headlining tour has one drawback. It keeps him away from his boyfriends Theo and Cameron for weeks at a time. They make every effort to come see him as often as possible, though, and after four and a half years as a trio, things are still going strong.

But then Cam comes alone, bringing news that stops Nate’s world on a dime—after seventeen years together, he and Theo are separating.  It’s a trial separation, but nevertheless, Nate is devastated. He tries to pull them back together, but there’s only so much he can do from the road.

At home, Cam tries to carry on, but feels like his whole life is spiraling out of control. Theo struggles to cope with the split and his worsening depression. They’re both quickly losing hope for a reconciliation… and keeping the man they both still love.

When Nate makes a desperate last ditch attempt to pull their trio back together, it’s make or break time. Is their trial separation just a temporary hiatus? Or is this the end?

This 84,000 word novel was previously published. 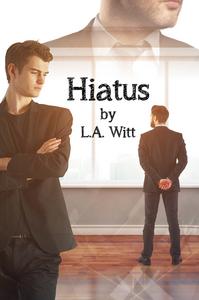 The cab driver punched it into his GPS, turned on the meter, and pulled away from the fairgrounds. The enormous parking lot had mostly cleared out, but there were still a few people making their way back to their cars, so I kept my baseball cap pulled over my eyes. As much as I adored my fans, and still couldn’t believe they’d recognize me—never mind mob me—I had somewhere else I needed to be tonight.

In my lap, I turned on my phone and texted my boyfriend, Cameron.

Then I turned the phone over and grinned in the darkness. Cam and his husband, Theo, had flown in this afternoon. I hadn’t seen them in three weeks—not since they’d met me like this at another hotel in another city—and I’d been climbing the walls every night. Skyping, texting, and e-mailing only did so much to make up for the lack of physical contact while I was out on tour. For the last seven months, I’d been on the road, only occasionally dropping back into LA, and in between, seeing them whenever they could meet me. Seven months down, at least five to go, assuming more dates weren’t added again.

Technically, we had an open relationship. Especially while I was out on the road, they had no problem with me hooking up with other guys. The same went for them. The only rules were we had to use condoms with other people, and with each other if we’d been with anyone else.

In practice, though, they were monogamous except for me, and despite the option being open, I hadn’t touched anyone. My band thought it was hilarious—now that we’d actually made it big and could act like the rock stars we’d always thought we were, I was practically celibate. Go figure.

But I didn’t want anyone else. For the last four and a half years, the only men I’d touched were the two who’d welcomed me into their bed and their marriage. I was one lucky bastard too. They were sweet, generous, and both were dynamite between the sheets.

Didn’t hurt that they were gorgeous too. They were different, and yet somehow complemented each other. Fair-skinned Cam, who somehow managed to never get sunburned despite living in Los Angeles. Theo, who could tan just looking at a photo of a beach. They both worked out and looked the part, and even though they’d long ago left the world of high-powered investment banking, they still looked that part too. Theo kept his dark hair short and professional. Cam looked studious and serious whether or not he had on his glasses. Small wonder they’d caught my eye that first night, since they’d both been wearing shirts and ties.

I shivered. God, those two were the reason business attire had been invented.

My phone buzzed. I turned it over, and Cam had written back.

I put the phone down again and rolled my stiff shoulders. I was seriously tempted to ask him for a massage tonight, but damn it, he hadn’t come here to work. He and Theo were here so we could fuck each other senseless, which would tide us over until the next tour stop where they could meet me.

On the other hand, it wasn’t like I ever had to twist his arm to give me a massage. He was the most tactile man I’d ever met. If he was touching, he was massaging, and when we were together, we were touching. So after a roll in the hay with him and Theo, it was a safe bet that whatever was left of me was getting massaged.

Closing my eyes, I grinned again as a pleasant shiver ran through me and curled my toes inside my laced-up boots. This time tomorrow, I’d still be limping from the aggressive, bruising sex I always had with Theo, and feeling like a million bucks from his gentler, tactile husband.

Almost exactly twenty minutes after we’d left the fairgrounds, the taxi stopped in front of the Riverside Hotel. Of course it was one of those ritzy-looking hotels with a fountain out front and a fleet of bellhops wearing black-brimmed caps and pressed jackets.

I couldn’t help laughing. Cam must’ve picked the place. That man had champagne-and-caviar taste like nobody else.

After I’d paid the driver, I started toward the gilded lobby. I was dressed down to blend in, but of course that had the opposite effect here. Jeans, a baseball cap, and an old leather jacket made me stick out like a sore thumb.

One of the bellhops held open the door for me. “Welcome to the Riverside Hotel.”

“Thanks.” I met his gaze, and his eyes narrowed just a tiny bit as if in recognition. I quickly broke eye contact and kept walking, hoping he didn’t think I was being an asshole. I just really, really needed to get to room 1128.

I walked across the marble lobby, past another fountain, and got into an elevator. As the numbers above the door climbed, so did my pulse. Why the hell were my palms sweaty? I wasn’t nervous.

Just excited. Insanely excited. Excited enough that by the sixth floor, I was starting to get hard. Hopefully no one joined me in the elevator. And if they did, they didn’t glance downward. That was just what I needed in tomorrow’s tabloids.

The imaginary headline made me snort. It wouldn’t be the worst thing they’d ever said about me.

At the tenth floor, I took in a deep breath through my nose and released it slowly. God, I missed my guys. One more floor, and I’d be…

I stepped out before the doors had even opened all the way, making as subtle a gesture as possible about adjusting the front of my jeans, and hurried down the hall toward room 1128.

I reached the room and paused for one more deep breath. As I knocked, I couldn’t stop myself from grinning like a giddy idiot—since, well, the shoe fit—so I didn’t try.

Footsteps on the other side sent my pulse into the stratosphere. I didn’t care which one it was. Cam. Theo. Both. I’d finally get to see them in real life instead of on a computer screen, and I’d get to kiss them and touch them and—

And my heart hit the floor.

“What’s wrong?” I stared at him, trying to make sense of the dark circles behind his glasses, the tightness of his lips, the fact that he couldn’t quite seem to look me in the eye.

He stood aside, keeping his gaze down. “Come on in.”

Stomach churning, I stepped into the room. There were two beds, and one had a suitcase next to it, standing neatly against the footboard beside a pair of equally neatly arranged shoes. Only one suitcase, though. I looked around.

No pile of semi-folded clothes beside an open suitcase on a bed. No jumble of receipts and pocket change on the nightstand next to the perfect row of Cam’s charging cell phone, wallet, and room key. No Theo.

Panic surged through me. “Where’s Theo?”

“He’s…” Cam put a hand on my shoulder and squeezed gently. “It’s just me tonight.”

Oh fuck. This was a “you might want to sit down” conversation.

Just as well—my knees were starting to shake.

He put his glasses on the nightstand, carefully lining them up beside the phone and wallet like he always did, and sat on the edge of the empty bed. I hesitated but joined him.

Though he still didn’t look at me, he did take my hand. His was sweatier than mine as he laced our fingers together.

“What’s going on?” I could barely make myself whisper. “You’re kind of scaring me.”

“I’m sorry.” He put his other hand over ours.

It wasn’t on the nightstand with everything else. Ice slithered through my veins.

Setting his shoulders back, he lifted his gaze to meet mine. “Look, we haven’t said anything because we knew you needed to focus on your tour. So we… I mean, we didn’t—”

“Just cut to the chase, Cam.” Why were my teeth trying to chatter? And where was his ring? “Give me the punchline. Please.”

He held my gaze for a second. Then he stared down at our hands and gripped mine tighter as he said, “The punchline is that Theo and I are separating.”