Chase has just arrived at a much anticipated leather convention, and he’s about to lose his mind. Not only is his ex attending, but Chase is also rooming with Derek, a submissive he’s been dying to top. Although Derek is in search of a Dom, he made it painfully clear when the two of them hooked up for a very hot—but very vanilla—night just before the convention that he wasn’t interested in submitting to Chase.

Derek isn’t stupid. No matter how desperate he is to submit to Chase, he wants no part of a rebound relationship. As long as Chase is still pining after the sub who broke his heart a few months ago, Derek’s keeping him at arm’s length. Besides, there’s another Dom at this convention, the gorgeous Master Raul, who Derek is determined to attract.

But when Chase and Derek are confronted with all their kinks, from ropes to leather, bondage to flogging—not to mention each other—they can only ignore their mutual attraction for so long.

“I never thought I’d say this,” Derek said, adjusting his backpack strap on his shoulder, “but I am really glad everybody’s not wearing leather right now.”

“No shit.” I scanned the hotel lobby’s thickening crowd as I tapped out my impatience on the upraised handle of my suitcase. This time tomorrow, the entire building would smell like a saddle shop, and there’d be enough leather visible to make the collective membership of PETA faint. Just the thought would normally make my mouth water.

Right now? Not so much, because it was ninety-seven degrees outside and the hotel’s air conditioner had picked this afternoon to crap out. Though I wouldn’t have guessed it prior to this moment, I realized then that if there was anything worse than standing in a long, slow-moving line, it was standing in a long, slow-moving line in a sweltering lobby surrounded by sweaty men in hot leather.

For the time being, there were a few people in leather, but mostly shorts and T-shirts. More shirts came off as more people crowded into the lobby; between the growing crowd and the thick black curtains covering all the windows to prevent passersby from seeing anything offensive this week, the temperature was rising by the minute.

Taped to a post, a photocopied sign tried to placate us: We apologize for the inconvenience. We are working to correct the faulty air conditioning as quickly as we can.

Might want to step it up, boys, I thought as the revolving doors deposited another half dozen or so attendees into the lobby. At least most of us could improvise if the heat lingered tomorrow. It would still be unpleasant, but we could just strip off layers until no one was wearing anything but bondage harnesses and hot pants. Half the guys would be almost naked most of the time anyway. Well, except for the guys who’d be demonstrating gimp suits. They’d be miserable. And oh, God, the poor furries . . .

The line inched forward, so we shuffled after it, stopping about three inches from where we’d been for the last ten minutes.

“Ugh.” Derek shrugged off his backpack and dropped it at his feet. “It is too. Fucking. Hot in here.”

And God damn him, he peeled off his white T-shirt.

I didn’t have to look. I did look, of course, but it wasn’t like I’d never seen him without his shirt. Smooth pecs, flawless abs, some elaborate Celtic knots tattooed across the left side of his ribcage. Not a single bruise or welt, though, which just twisted my gut a little tighter. He was a submissive and a masochist. Sex left marks on a man like him.

“I just want to fuck tonight,” he’d said somewhere between the first kiss and the first condom. “Just fuck me, Chase.”

He must not have realized that I’d distinctly remembered all the times he’d said sex wasn’t worth having unless someone drew blood or left a mark. And now, the morning after we’d finally hooked up, he didn’t have a single welt on him. Ouch, Derek. Ouch.

I definitely could have done without nine hours in the car with him on the way here. Hooking up last night meant I’d spent all damned day today obsessively wondering why a kinky sub like him was fine having plain vanilla sex with me, but nothing more. Having him right beside me while I gnawed on those thoughts was . . . less than comfortable.

Correction: Standing in a slow-moving line a sweltering lobby may have sucked, but it didn’t get any worse than checking into a week-long convention that promised to be as sexually charged as they ever were, during which I’d be sharing a room with the submissive I’d fucked last night but hadn’t actually topped, even though I’d wanted to. And I was still licking my wounds from my last sub deciding he’d rather . . . anyway. Whatever.

Oblivious to my inner grumbling, Derek gasped. “Oh my God,” he said in a stage whisper. “There he is!”

Didn’t need to ask who. It wasn’t hard to pick the guy out—even surrounded by other tall, hot men with broad, inked shoulders, the blond goatee and long ponytail gave him away. And heaven knew I’d seen enough pictures of him recently to pick him out of a lineup. Who else but the infamous Master Raul could make Derek flush more than an overheated hotel lobby already had?

Correction again: It didn’t get any worse than being too-recently single, checking into a week-long, sexually charged convention, rooming with a submissive I was dying to top, and knowing that said submissive had made it his mission to put himself on the radar of that guy.

And suddenly I realized why he hadn’t wanted me to leave any marks. 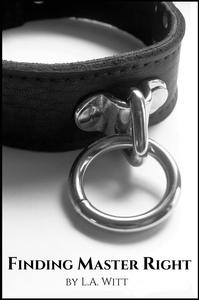