TITLE: Did Somebody Order a Pizza?

This books is also available as part of the Guys In Love collection.

Paul Switzer knew this night would come—sooner or later, he’d have to deliver a pizza to Delta Sig, the frat he dropped out of after a hazing incident gone bad. He fully expects to be harassed, maybe even threatened.

And that’s not the worst part. Though Paul’s former childhood friend and his first love, Cory Bowman, knows what “accidentally” happened that fateful night, he’s still part of Delta Sig.

Seeing his ex again reignites Paul’s bitterness over the breakup, but he vows to put it behind him. Which would be great if Cory would let it drop, but apparently some of his feelings have been reignited too.

Can Cory convince Paul that he really has changed? And even if he can, there’s still the not-so-small matter of Delta Sig. Cory doesn’t want to leave the fraternity, and Paul’s willingness to forgive only goes so far…

This story was originally published as part of the Campus Cravings collection.

It was the goddamned frats. Specifically Delta Sig.

And guess where tonight’s order was going.

I pulled up in front of the Delta Sig house, and glared up at the white three-story Cape Cod. Another party tonight. That explained the large stack of pizzas in the passenger seat of my barely-running Honda Civic.

Just my luck. I guess it was bound to happen sooner or later—the fraternities ordered from Palozzo’s all the time, and eventually my name was going to come up as the driver for a delivery to this fucking house.

I killed the engine and shoved my keys in my pocket. Glancing up at the house again, I took a deep breath. With any luck, everyone at this particular party was already seventeen sheets to the wind and wouldn’t recognize me as anything besides the bringer of pizza.

With the pizzas on my arm in their insulated bags, and a pair of plastic sacks—one full of chicken wings, one of Pepsi bottles—dangling from my wrist, I carefully made my way up the walk and onto the porch. I rang the doorbell with my elbow and sent up one more quick prayer that no one realized or cared who I was.

I sure as fuck knew that face—Ken Brighton. One of two sadistic motherfuckers who’d been in charge of hazing pledges.

He met my gaze with red, barely-focused eyes.

“Pussy?” He squinted a bit and cocked his head. “Is that you?”

I swallowed. “Your total’s seventy-eight twenty-one.”

“Holy shit, Pussy. It really is you!” He slapped my shoulder so hard I nearly stumbled, and I almost dropped the pizzas. “How’ve you been?”

I recovered my balance and gritted my teeth as I repeated, “Your total’s seventy-eight twenty-one.”

“Yeah, yeah.” He put a hand on the back of my neck and herded me inside. “Just drop ‘em in the kitchen.”

“Come on, Pussy.” He shoved me forward, and it was either take a step in that direction, or faceplant, pizzas and all.

And suddenly I was in the Delta Sig house, surrounded by the brothers of the frat I’d dropped out of. The frat I’d gotten investigated for dangerously excessive hazing, though I was pretty sure they didn’t know that was me. I hoped. God, I hoped.

I’d vowed never to set foot in this place again. If not for my fear of losing my job—and with it, my ability to eat—I wouldn’t be here tonight. Drop off the pizzas, collect the money, get the fuck out, hopefully with my dignity still intact.

“So they got you slingin’ pizzas now?” Ken led me through the living room. “Hey, somebody grab the new pledges. They need to see what happens to the fuckers who puss out.”

And with that, I knew what it felt like for my balls to shrivel into tiny nuggets of shame before retreating upward. I didn’t bother asking why they had pledges this time of year—Pledge Week was usually in the fall, not spring—because I just wanted to get the fuck out of here.

Teeth grinding and stomach churning, I stepped into the kitchen, and my heart dropped. By the grace of God, the pizzas didn’t.

Standing on the other side of a kitchen island covered in bottles and cans, my ex-boyfriend lowered his red Solo cup, but he kept his other arm around a pretty brunette who was trying not to fall out of her low-cut blouse. And damn him, he looked good. His dark hair was bleached blond now, spiked instead of smoothed over. Judging by the way his shirt stretched over his arms and shoulders, he’d been spending plenty of time at the gym—any Freshman or Sophomore Fifteen for him would’ve been pure muscle.

I didn’t know if the girl was his girlfriend, or just someone he was chatting up tonight. All I knew was it had been almost a year and a half since the last time I’d stood next to him like that, and it shouldn’t have hurt this much to see someone else there now.

“Paul.” Cory swallowed, blue eyes locked on mine. “I… didn’t realize you were working for Palozzo’s.”

I tore my gaze away from him and searched for an empty space where I could set everything down.

“Here.” Cory grabbed some bottles, and the girl took a few more, clearing just enough room for the stack of pizzas.

I set the boxes on the counter. “Total is seventy-eight twenty-one,” I muttered as I pulled the bags of wings and soda off my arm. I put those on top of the boxes, then flexed my wrist gingerly as the blood worked its way back into my fingers.

Cory called past me, “Who’s paying the pizza guy?”

“Not me!” someone shouted.

“The pizza’s here?” One of the guys half-stumbled, half-ran into the kitchen. He crashed into me, muttered a drunken apology, and attacked one of the pizzas. At least he didn’t recognize me.

I looked across the frat boy, the pizzas, and the booze at my ex. “I can’t leave until someone pays me.”

“Right.” He pulled his wallet from his pocket, handed me a wad of cash and muttered, “Keep the change.”

I quickly counted it out. Eighty bucks. Awesome. Not even a two dollar tip. At least I didn’t have to stay here any longer. “Thanks. Have a good night.”

I didn’t wait for a response, and got the fuck out of there. As I did what felt like a walk of shame—more like a sprint of shame—through the living room, the senior guys shouted something at me, but I let my pounding heart drown it out. None of them tried to stop me, at least. And thank God the beer can that sailed past my head was mostly empty and not terribly well-aimed—considering two of the brothers in this house were baseball players, I counted my blessings.

And finally, I was outside. I hadn’t left the Delta Sig house this quickly since the day I’d parted ways with the fraternity. I didn’t quite run down the front steps, but I was damn close. When my sneakers hit the walkway, I was just about to break into a sprint when—

I halted. So did my breath—damn near eighteen months, and Cory could still make my breath catch. Son of a bitch.

Do we have to?

I exhaled, and then slowly turned around. “About what?”

He came down the steps and stopped a few feet from me. “It’s, uh, good to see you.”

He rolled his eyes. “Really? We can’t even talk for a minute?”

“I’m on the clock.” And I can’t stand looking at you. “I have to go.” Because staying here hurts too much.

“Oh really?” I laughed bitterly. “That’s what you came out to apologize for? Them?”

He pursed his lips. “What do—”

“Don’t you have someone in there waiting for you?” I narrowed my eyes. “I’m sure she’d rather not see you trying to make nice with a man.”

“Oh, save it.” I spun on my heel and walked as fast as I could toward my car.

“Paul, come on,” he called after me. “Would you please just stop and listen to me? For five damn minutes? Seriously, just—”

The car door cut him off, and I refused to look up as I started the engine. I could see him out of the corner of my eye, standing in the middle of the walk, and I knew from experience he had that “damn it, Paul, you’re being unreasonable” look on his face. Head cocked, eyebrows up, lips taut. Yeah, I knew that expression well enough I didn’t need to see it again. I didn’t need to see him again.

I squealed my tires, took off down the road, and left Cory and Delta Sig in the rearview where they belonged. 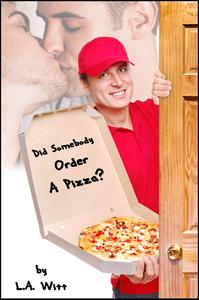