After Andrew Wentz loses his job, his parents take pity and invite him to join them on a Mediterranean cruise. He jumps at the chance, but once he’s aboard, he feels guilty. Shouldn’t he be figuring out what to do with his pathetic life instead of lazing around on a ship?

The cruise was supposed to be Eric Schofield’s honeymoon, but one cheating fiancé later, he’s traveling solo. Fine. He’s been working too much anyway, so a vacation is exactly what the doctor ordered. He’s on a boat with plenty of hot men, and he’s determined to invite as many of them as he can into his stateroom’s king sized bed.

When the two men run into each other—literally—it’s crush at first sight. Now Andrew can’t think of anyone else, and Eric only wants one man in his bed. The sparks fly, and it’s the perfect vacation fling, especially since ten days isn’t nearly enough time to develop feelings.

At least, it’s not supposed to be.

This transgender gay romance is 49,000 words.

Maybe this wasn’t such a good idea.

Standing in the doorway of the suite my fiancé and I had reserved for our honeymoon cruise, I felt like shit. Was there still time to bolt off the ship and go ashore? My suitcases might not make it home right away, but at least I’d be on dry land. Not…here.

Except I’d already flown to Barcelona, and I’d already paid for the cruise, so I might as well enjoy it. I briefly considered just spending the next week and a half tooling around in Barcelona, but after a few days, I was already tired of the city. Which probably said more about my state of mind than the city itself. It was hard to work up any enthusiasm for walking Las Ramblas and exploring the Sagrada Familia when all I could think about was the man who hadn’t come with me.

Well, whatever. I was here. He wasn’t.

And for the next ten days, this was home. Time to settle in.

The balcony suite was exactly what the website had promised. The rose petals were a nice touch, sprinkled all over the comforter on the queen size bed I’d be sleeping in alone. The bed took up most of the room. A sitting area made up the rest of it, featuring two armchairs that were the same pastel pink as almost every other surface and decoration.

I was happy to see that my luggage had made it. My two suitcases were lined up neatly beside the bed, not looking any worse for the wear despite their unaccompanied tours of Heathrow and Barcelona-El Prat. The first suitcase hadn’t shown up in London until my second day there, and the other had gone MIA when I’d arrived in Barcelona. I wondered if it was some kind of omen, losing luggage twice on the same trip. Especially when I still had return flights to deal with.

I’d find out, I supposed. Ultimately, though, the suitcases and I had all made it. Only thing missing in this overpriced and over-decorated stateroom was the man I’d been engaged to and the ring I couldn’t return because I hadn’t caught the asshole cheating until after the engraving was done.

I glared at the petal-covered bed. Right then and there, I vowed to fuck as many men as possible in that thing. And on the balcony. Chris and I had gone on and on about all the sex we’d wanted to have on the balcony. Oh, there’d be sex out there on this trip. As much as possible. Wasn’t there an LGBT mixer in one of the night clubs? I’d have to check the itinerary.

For now, that could wait. People were still boarding, and I didn’t feel like socializing at the moment.

At the opposite end of the stateroom from where I was standing like an idiot was a sliding glass door leading out to the balcony, so I went to check that out. As I walked past the sitting area, I ignored the vase with the single red rose in the middle of the coffee table. I didn’t even have to look to know what the stupid card propped up against it probably said. Something like Congratulations Mr. & Mr. Schofield-Wright.

Ah well. At least I hadn’t gone through the motions of changing my last name yet. I’d probably have started signing everything Eric Schofield-Wrong just for spite.

My own thought made me laugh halfheartedly, which was better than I’d been doing recently, so I took it.

The balcony was bigger than I’d expected—room for two deck chairs and a table. Nice view, too. There were privacy dividers between my balcony and the neighbors on either side. Perfect. The noise alone would probably traumatize whoever had the misfortune of being in either of those rooms; they didn’t need to see the actual show.

I chuckled again, this time with some bitterness. As I absently ran a finger along the white metal railing and gazed down at the throngs of people still waiting to board, I reminded myself again and again that there were a few thousand passengers on this cruise. Statistically, at least some of them had to be queer, and my odds of getting one to come back to my stateroom—or take me back to his—were no worse than they were at the average gay bar. Which historically hadn’t been great, but not terrible either.

Sighing, I rubbed my hand over my face. Okay, I’d already spent the London and Barcelona legs of this trip being miserable. Now I was on a cruise. I had almost two weeks—plus two more in Rome—to pull my head out of my ass, have a good time, and make the money I’d spent worthwhile. Hadn’t Chris done enough damage?

Yeah. He had. The motherfucker had. And I’d lost the last few weeks of my life to the long, miserable process of splitting up and canceling a wedding. He didn’t deserve more of that or more of the vacation he’d already monopolized from a distance.

Despite still feeling the weight of the last few weeks on my shoulders, I managed to smile. Yeah. I was going to enjoy this cruise. Every last minute of it, from stuffing my face to bringing random men into that rose-covered bed for some shameless debauchery.

With a chuckle, I went back into the stateroom. It wasn’t big enough to require a whole lot of exploration, and my little mental pep talk had given me an energy boost. Now I was restless, not to mention eager to get a feel for this floating city.So I grabbed my wallet and key card, left the stateroom, and went out exploring. 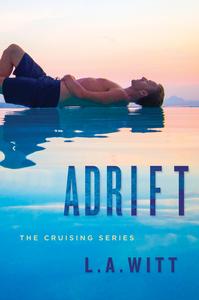