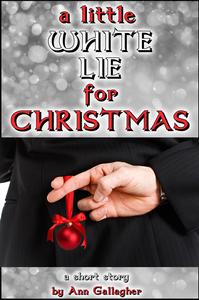 A Short Story by Ann Gallagher

Steve hates Christmas, and he’s pretty sure everyone else is just faking it. After all, his family can’t be the only one who seasons their get-togethers with fighting, judgment, and guilt.

Eric—his coworker and secret crush—has tried to convince him not to go for another round of family drama this year, but to no avail. It’s Christmas. Steve can’t just not go home.

But when Eric tells a little white lie, Steve’s Christmases may never be the same again.

This holiday short story is 8,500 words.

It was December 22nd, and the mood around the office was festive and relaxed. Half the staff had taken today and even yesterday off so they could travel to visit family out of state, so the whole place seemed deserted. And things had been pretty quiet all week—most of our clients and vendors were shut down for the holiday. Things were pretty much at a standstill.

Most of my coworkers passed the time chatting about plans for Christmas, what they’d gotten for their kids, and who was going where or had how many people coming to visit. Cubicles were decked out with stockings, garlands, mini trees, wreaths, and ornaments, not to mention strands of tinsel and scattered glitter snowflakes that we’d be finding everywhere until June. On top of the usual notes of toner and coffee, the whole place smelled like pine, the mingling remnants of our lunch potluck, and whatever holiday-themed scented candle Judy the receptionist was burning.

I kept my head down and my attention on my work, but that wasn’t helping much. Mostly because, well, I was running out of stuff to do. There wasn’t really any point in being here. With as much as my boss was dicking off, wandering around in a Santa hat and joining in all the conversations, I wondered why he didn’t just cut us loose.

He would soon, though. Every year, like clockwork, he’d act like he’d been moved by the spirit of Christmas and tell us all we could leave at three thirty. And everyone would act like it was the nicest thing ever, and we’d all scramble outside into the snow to join all the other thousands of people whose benevolent bosses had let them go before five.

I put my pen down and rubbed a hand over my face. I wasn’t being fair. My boss was a good guy. My coworkers were great people. It was just this stupid holiday that made me crazy. I hated how fake everyone was. How they acted like going home and spending Christmas with family wasn’t hell on earth. Year after year they bought into those family holidays that TV and movies sold us and somehow didn’t think that in forty-eight hours or so, they’d all be begging Santa for a mercy killing.

“Hey, Scrooge.” Literally anyone else’s voice would’ve made my teeth grind, but even the cheery note in Eric’s didn’t make me want to choke him.

I lifted my head as he swished into my cubicle. He perched on the edge of my desk, sleigh bells on his shoes jingling softly, and crossed his legs, green leggings hissing quietly with the motion. I chuckled. He looked like a dork today, and despite myself, I couldn’t help but smile. The little red and green elf hat and the terrible shirt he’d worn for the department’s ugly sweater contest were far too festive for my taste, but…he pulled it off. He was cute to begin with.

As much as I loathed Christmas, it was hard not to appreciate whatever silliness he came up with. Like the time the weather had been shitty for three weeks straight, and he’d shown up at the office in a sun costume—dress code be damned—and handed out leis. Anyone else in the building would’ve been booted out of my cubicle with a grumbled “fuck off,” but I had to admit, he had brightened the mood around the office. Two years later, I still had the red and blue lei hanging next to my calendar.

Sitting back in my chair, I folded my hands in my lap. “What’s up?”

“Just fucking off and waiting for the boss man to put his dick away and kick us all out.”

I laughed. That was probably why he didn’t annoy me—he tempered the eye-watering cheeriness with an acid tongue and a filthy mouth.

He leaned back on his hands on my desk, and I tried not to notice how even that horrible sweater didn’t mute the mouthwatering lines and curves of his torso. And of course the leggings he’d worn—all to make his outfit look even tackier—clung to his very toned legs. God help me when he walked out of my cube, because I always spent enough time drooling over that gorgeous ass.

I shook myself. “So what’re your big plans for the holiday?”

“The usual.” He shrugged, absently kicking his top leg back and forth, which made the bells on his shoes jingle. “Christmas Eve at my sister’s place with whatever extended family shows up. Christmas Day at Mom and Dad’s.”

“Uh, yeah.” He toed me playfully, and for some reason, I had to fight the urge to slide my hand up his tightly wrapped calf. “It is fun, sweetheart. Not everybody’s family is dysfunctional like yours.”

I rolled my eyes. “Says the guy whose grandma thinks he’s going to burn in hell.”

“Yeah.” He shrugged. “And that’s why she doesn’t get invited to things anymore. See, my family has figured out the secret of Christmas.” He leaned in closer and said in a stage whisper, “You don’t have to spend it with assholes just because you share DNA.”

“Yeah, well…” I rubbed my eyes and sighed. “When the only people you share DNA with happen to be assholes—”

“So don’t spend it with them.”

I dropped my hand. “And who should I spend it with?”